The New England Journal of Medicine has published a new study proving once-and-for-all that natural immunity is real and it is more effective than vaccinated immunity alone.

Natural immunity “protection was higher than that conferred after the same time had elapsed since receipt of a second dose of vaccine among previously uninfected persons,” the study concluded.

A comparison of the three cohorts can be seen in the chart below. It shows that the unvaccinated cohort with natural immunity had comparable re-infection rates with those who had hybrid immunity. Natural immunity was far superior to vaccinated immunity alone. 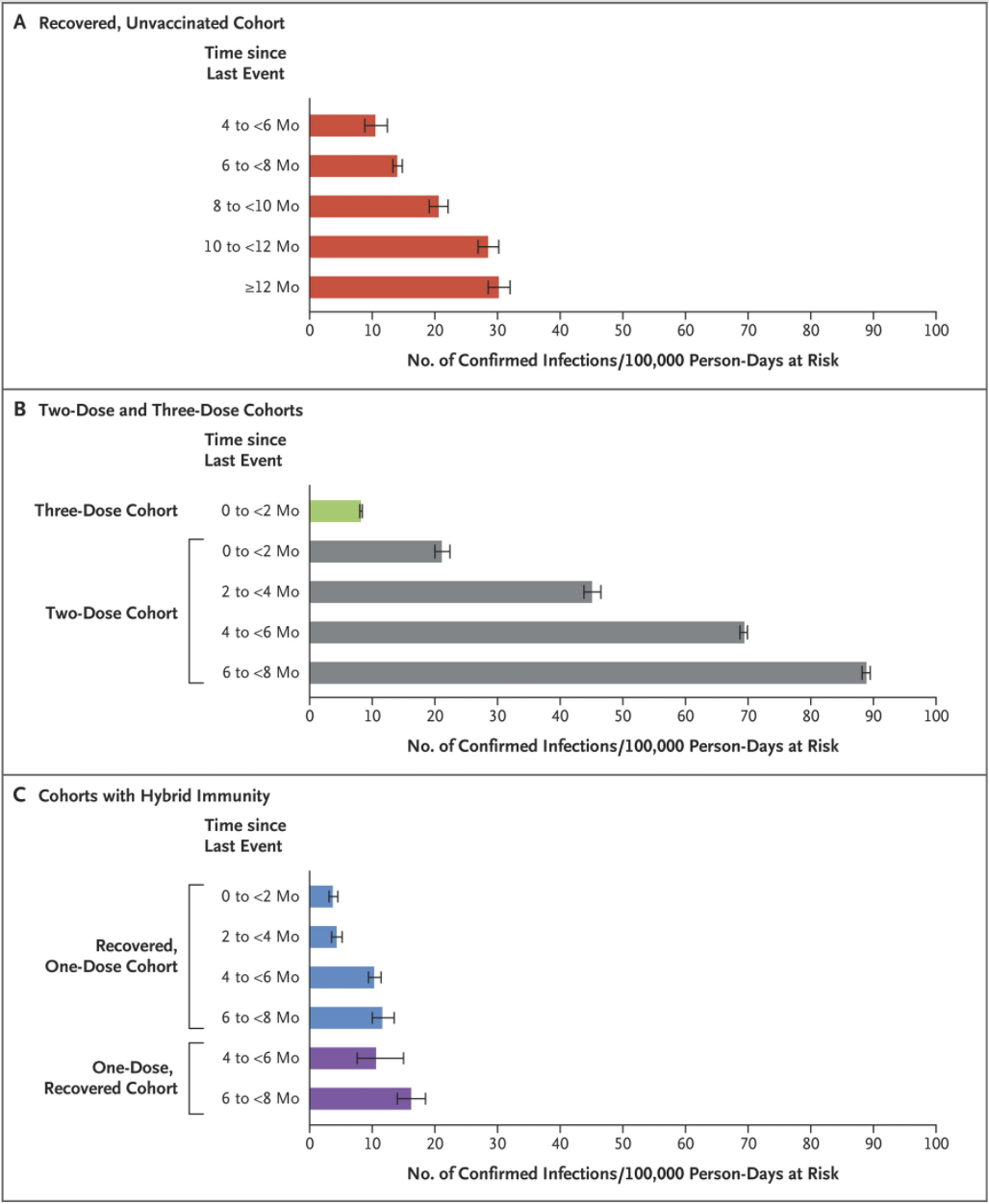 “The number of cases of SARS-CoV-2 infection per 100,000 person-days at risk (adjusted rate) increased with the time that had elapsed since vaccination with BNT162b2 or since previous infection,” the study explains. “Among unvaccinated persons who had recovered from infection, this rate increased from 10.5 among those who had been infected 4 to less than 6 months previously to 30.2 among those who had been infected 1 year or more previously.”

“In findings that were consistent with those of other studies, after several months, persons with hybrid immunity were better protected against reinfection than uninfected persons who had previously received two doses of vaccine (the two-dose cohort),” the authors stated. “Furthermore, we found that a single dose of the vaccine administered to a previously infected person or a booster dose administered to an uninfected person who had received two doses of vaccine restored the level of protection to the level in the early months after recovery or vaccination. The timing of vaccination after infection affects the protection.We did not have enough data to evaluate the level of protection as a function of time between infection and vaccination, while taking the waning effect into account.”

“The results reported here are in line with those of a study conducted by an Israeli health maintenance organization,” the authors added. “That study showed that previously infected persons with or without one vaccine dose have better protection than uninfected persons who have received two doses of vaccine 3 to less than 8 months after the last immunity-conferring event. Our data on hospitalized patients who had severe Covid-19 did not contain enough cases for a definitive analysis but did not appear to support the findings in a recent report that suggested that vaccinated persons are more protected than previously infected persons 3 to less than 6 months after an immunity-conferring event.”

The Epoch Times gathered feedback from physicians on the meaning of the study’s findings.

“CDC seroprevalence data shows that 58 percent of the public has already been infected across all age groups (75 percent of pediatric population). For those with immunity from natural infection, the risk of hospitalization and death upon reinfection is exceedingly low,” Dr. Sanjay Verma told The Epoch Times.

“Therefore, continued disregard for immunity from natural infection is not only contrary to all the published science, it’s an egregious affront to medical ethics,” he continued.

One of the biggest mysteries of the Covid-19 pandemic is why public health experts ignored natural immunity. Americans were repeatedly urged to get vaccinated, and millions of people lost their jobs despite having natural immunity and vaccines failing to stop the spread. Whether the reason politics, corruption, or both, the public health sector’s response to the Covid-19 pandemic has been completely unacceptable.

Natural Immunity wins again. New England Journal Study: Natural immunity “protection was higher than that conferred after the same time had elapsed since receipt of a second dose of vaccine among previously uninfected persons.” https://t.co/aEFHKfXQUi

If only this news would have been admitted years ago, like Dr. Anthony Fauci did prior to the Covid pandemic.

Fauci is Back with a Warning for Americans: ‘Wear a Mask’ When You’re Indoors — This Outbreak ‘Isn’t Over Yet’