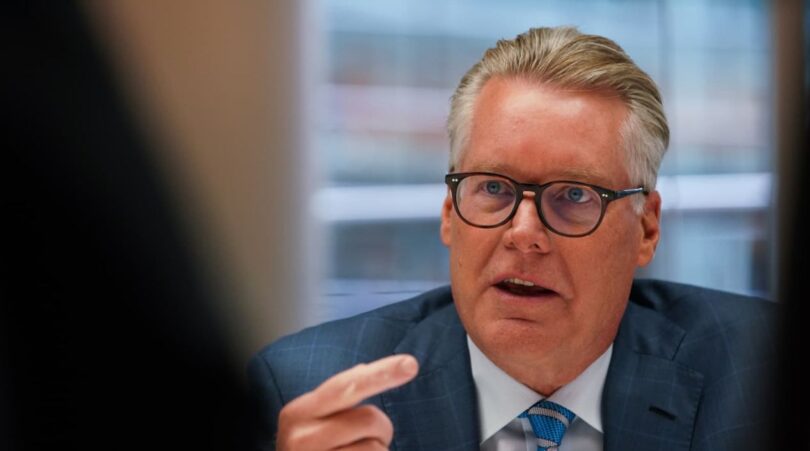 Delta Airlines’ CEO Ed Bastian appeared on Fox Business on Saturday and claimed that the airline he leads will respect employees’ personal health decisions and not enforce a vaccine mandate.

“We’re proving that you can work collaboratively with your people, trusting your people to make the right decisions, respecting their decisions and not forcing them over the loss of their jobs,” Delta’s CEO said.

It may be true that Delta is the only major airline that has not mandated that its employees be vaccinated for Covid-19 or be fired. But the truth is more complicated than that: Delta coerces employees to get vaccinated by slapping them with a $200 monthly fine and weekly testing if they do not comply.

In August, the Associated Press reported that Delta would be charging employees for the purported increased costs associated with self-insuring them for Covid-19 hospitalizations.

“Delta Air Lines will charge employees on the company health plan $200 a month if they fail to get vaccinated against COVID-19, a policy the airline’s top executive says is necessary because the average hospital stay for the virus costs the airline $50,000,” the AP reported.

“CEO Ed Bastian said that all employees who have been hospitalized for the virus in recent weeks were not fully vaccinated,” the AP report noted.

“Delta stopped short of matching United Airlines, which will require employees to be vaccinated starting Sept. 27 or face termination,” the AP added. “However, the $200 monthly surcharge, which starts in November, may have the same effect.”

“This surcharge will be necessary to address the financial risk the decision to not vaccinate is creating for our company,” Bastian said in a memo to employees.

The airline now has an approximate 90% vaccination rate already, and expects this to increase to 95% in November.

“Mandate is only one way to get people vaccinated,” Bastian told Reuters Wednesday in an interview. “It’s a very blunt instrument.”

In May, Becker News reported on a ‘scathing’ anonymous letter signed by a 20+ years Delta Airlines Employee. It was called “Ed Bastian and Death of Reason at Delta Airlines.” After listing the unethical activities of Delta Airlines, the letter writer calls out the company for ‘fascism.’

“Our company should do none of those things,” the letter went on. “Yet, on Delta’s behalf, our executives and management routinely adopt and enforce absurd policies based upon their own fashionable socio-political whims void of reason and common sense. These managers crave peer approval, are insecure, vindictive and enact their gross intolerances they profess to reject.”

“Such corporate activism, combining business with political (or business and state) agendas, is, in fact, fascism,” the letter added.

Southwest Airlines recently faced major operational disruption that compelled its CEO to announce that he would not be firing employees over the vaccine mandate.

“We are not going to fire any employees over this,” Southwest CEO Gary Kelly said.

“This is a government mandate, it’s a presidential order, and we’re doing our best to comply with that according to the deadlines that have been set,” Kelly added.

“I’ve never been in favor of corporations imposing that kind of a mandate, I’m not in favor of that, never have been,” Kelly said on CNBC. “But the executive order from President Biden mandates that all federal employees and then all federal contractors, which covers all major airlines, have to have a vaccine mandate in place by December 8. So we’re working through that.”

While the federal vaccine mandate was announced in September, it has not yet been formally issued by the Biden administration. The uncertainty has caused many corporations to pre-emptively comply with the vaccine order, even though the unannounced regulations would conflict with some state laws.

Southwest Airlines employees are reportedly organizing a peaceful protest, and American Airlines recently appeared to take a page out of the Southwest playbook by causing the airline major disruption.

“Hundreds of AA workers and allies protested outside the company’s Fort Worth, Texas headquarters,” Newsweek reported. “The protesters told The Dallas Morning News that they are skeptical of the vaccines’ effectiveness and their unreported side effects.”

According to the online publication Paddle Your Own Kanoo, “the protestors were a mix of employees from across the airline including pilots, gate agents and ramp workers. Some wore their uniforms, while their numbers were swelled by friends and family who supported their right to reject the vaccine.”

Currently, Boeing workers are striking against the vaccine mandates and reportedly won’t return to work until they are overturned. There may be even more transportation disruption ahead as 40% of TSA workers are unvaccinated. Truck drivers and dock workers around the world are threatening to go on strike and cause further supply chain chaos.

Delta Airlines’ CEO read the writing on the wall and wisely decided to allow employees a say in their own health decisions. But for major corporations that decide to violate their employees’ health rights, there are all the signs that major pushback awaits for them directly ahead.

Editor’s note: This article has been updated after publication.