Biden White House Advised States to Deprive Children of Sports Unless They Got Covid Vaccinations: Emails

The federal government’s response to the Covid-19 pandemic may already be one of the most infamous chapters in U.S. history. But new evidence keeps coming to light that reveals the “Experts” were every bit as cynical and dishonest as most citizens had figured out years ago.

An August 2021 email by the U.S. Department of Education’s Anne Hartge, of the Office of Communications and Outreach, following up on a conversation between Eric Hagarty, who is now Pennsylvania’s current Secretary of Education; Tara Piechowicz, Deputy Chief Of Staff for Pennsylvania Governor Tom Wolf; and Jack Groarke, Deputy Chief of Staff for Federal Affairs for Gov. Wolf, sheds an ugly spotlight on the behind-the-scenes decisionmaking that led to the current crisis in education among America’s schoolchildren. 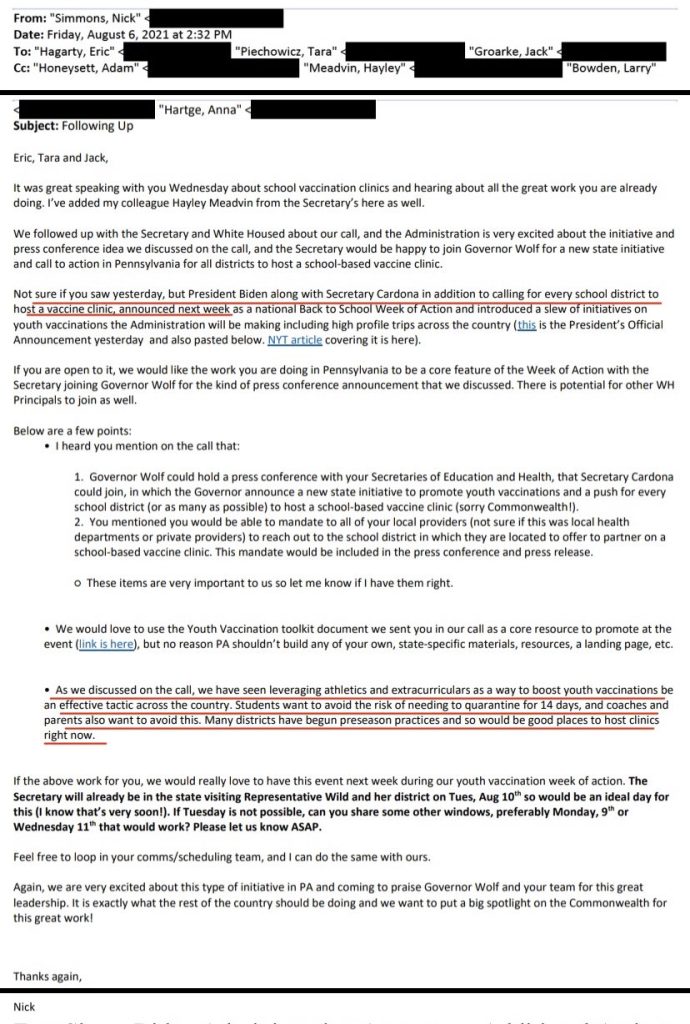 “Not sure if you saw yesterday, but President Biden along with [Education] Secretary Cardoina in addition to calling for every school district to host a vaccine clinic, announced next week as a national Back to School Week of Action and introduced a slew of initiatives on youth vaccinations the Administration will be making including high profile trips acrosss the country…” Hartge wrote.

Then comes an absolutely brutal revelation about how the vaccine requirements were used to punish children who did not want the jabs, or whose parents did not want them to have them, and limited many children’s ability to socialize, get sunshine, and exercise.

“Public record emails show the Biden administration wanted to ‘leverage’ school sports and activities to coerce vaccination amongst students,” Megan Eileen noted. “… we have seen leveraging athletics and extracurriculars as a way to boost you vaccination as an effective tactic across the county.”

They used the threat of students missing games due to Covid-19 exposure and long quarantines:

“Sports and extracurriculars as an important factor for why young people should get vaccinated- they don’t want to jeopardize forfeiting games or missing performances and competitions.” pic.twitter.com/hak0SSIy6i

“They used the threat of students missing games due to Covid-19 exposure and long quarantines,” Eileen added.

“Sports and extracurriculars as an important factor for why young people should get vaccinated- they don’t want to jeopardize forfeiting games or missing performances and competitions,” she highlighted from the email.

They also leveraged ‘peer pressure’ to get students to coerce kids into getting the so-called “vaccines.”

These were all tactics to be used at schools and these emails include Eric Hagarty, who is now Pennsylvania’s current Secretary of Education.

Pennsylvania parents: if you value parental rights, vote for @dougmastriano.

“Have you considered inviting a few HS football players, coaches and other types of athletes to the event? Data has shown this is one of the biggest messages that has been moving youth vaccine numbers,” the email said.

“These were all tactics to be used at schools and these emails include Eric Hagarty, who is now Pennsylvania’s current Secretary of Education,” Eileen added. “Pennsylvania parents: if you value parental rights, vote for [Doug Mastriano.]”

Philip Holloway, a police lawyer and radio host who does the Sworn Podcast, put the email’s revelations in outstanding context.

Here is a smoking gun that we always knew would come to light. Your federal government purposefully made kids lives more miserable during covid by using official "guidance" to ham-handedly drive people to vaxx their kids

“Here is a smoking gun that we always knew would come to light,” Holloway remarked. “Your federal government purposefully made kids lives more miserable during covid by using official “guidance” to ham-handedly drive people to vaxx their kids “leveraging..extracurriculars..as an effective tactic.”

The truly appalling aspect to the U.S. Department of Education’s childhood ‘vaccination’ drive is that there is now plentiful evidence that the mRNA shots cause known side effects, particularly for young persons.

“In fact, we don’t know if the vaccines are safe and effective,” Allyssia Finley wrote in a WSJ editorial. “The rushed FDA action was based on extremely weak evidence. It’s one thing to show regulatory flexibility during an emergency. But for children, Covid isn’t an emergency. The FDA bent its standards to an unusual degree and brushed aside troubling evidence that warrants more investigation.”

“More troubling, vaccinated toddlers in Pfizer’s trial were more likely to get severely ill with Covid than those who received a placebo,” WSJ notes. “Pfizer claimed most severe cases weren’t ‘clinically significant,’ whatever that means, but this was all the more reason that the FDA should have required a longer follow-up before authorizing the vaccine.”

“Also worrisome: Most kids who developed multiple infections during the trial were vaccinated,” the editorial adds. “This warranted more investigation, since experimental vaccines for other diseases sometimes increase susceptibility to infection.”

Dr. Marty Makary, a Johns Hopkins medical professor and Fox News Contributor, explained that healthy children’s low susceptibility to Covid and natural immunity should play a key role in a doctor and parent deciding whether a given child should be inoculated.

“For kids with a special medical condition, I would say it’s a good idea [to get vaccinated] if they’ve not had COVID in the past, but for the vast majority of healthy kids, the case may be there, but it’s certainly not compelling,” Dr. Marty Makary, a Johns Hopkins medical professor, told Fox News. “If you look at the fact that 75% of kids had COVID as of a CDC study back in February and Omicron has been ubiquitous since then, 80 to 90 plus percent of kids have already had COVID. So we’re talking about immunizing those who are already immune for a lot of people. That just does not make sense.”

“COVID-19 vaccination was ‘significantly associated’ with a 25% jump in emergency medical services (EMS) for heart problems in 16-39 year-olds in Israel, whose vaccination rate is among the world’s highest, according to a peer-reviewed study by MIT researchers,” Just the News reported.

“While not establishing causal relationships, the findings raise concerns regarding vaccine-induced undetected severe cardiovascular side-effects and underscore the already established causal relationship between vaccines and myocarditis, a frequent cause of unexpected cardiac arrest in young individuals,” the study said.

The U.S. government made millions of schoolchildren miserable during the Covid pandemic despite their age group being at extremely low risk from the virus. Indeed, public health officials and educators restricted activities that would have made children healthier and more resistant to the virus — exercise, sunshine and fresh air — in an all-out push to get children ‘vaccinated.’ They abused their power to coerce children and parents to get the mRNA shots, despite the evidence that they did not stop the spread of infection or transmission, healthy children being at extremely low risk, and no measurable benefit for those with natural immunity. It’s an absolute travesty and it’s time for parents to hold these people fully responsible for their abuse of public office.