The Rittenhouse defense team has filed a motion for a “mistrial with prejudice” on behalf of the defendant over the Wisconsin prosecutorial team withholding high quality video evidence that would seem to exonerate Kyle Rittenhouse. 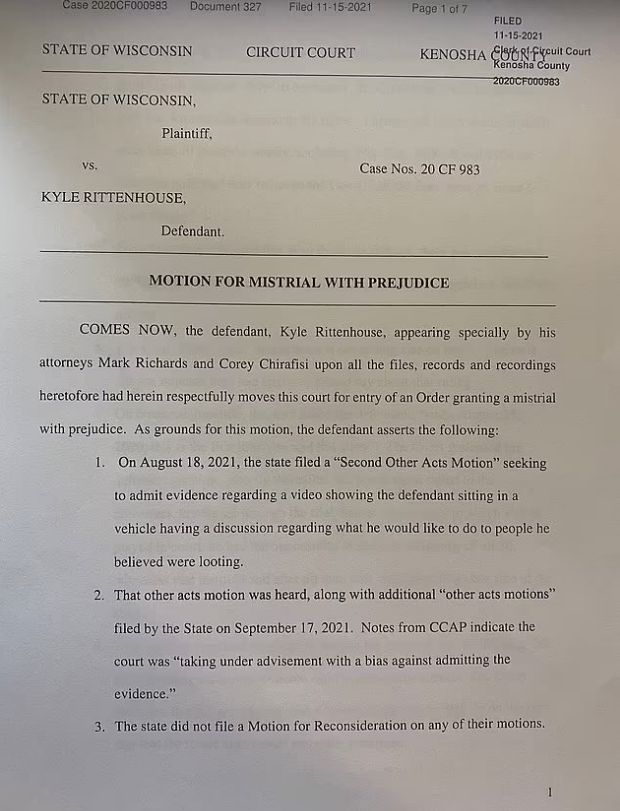 The second page of the document recounts that the prosecution cannot argue presumed guilt over post-arrest silence. 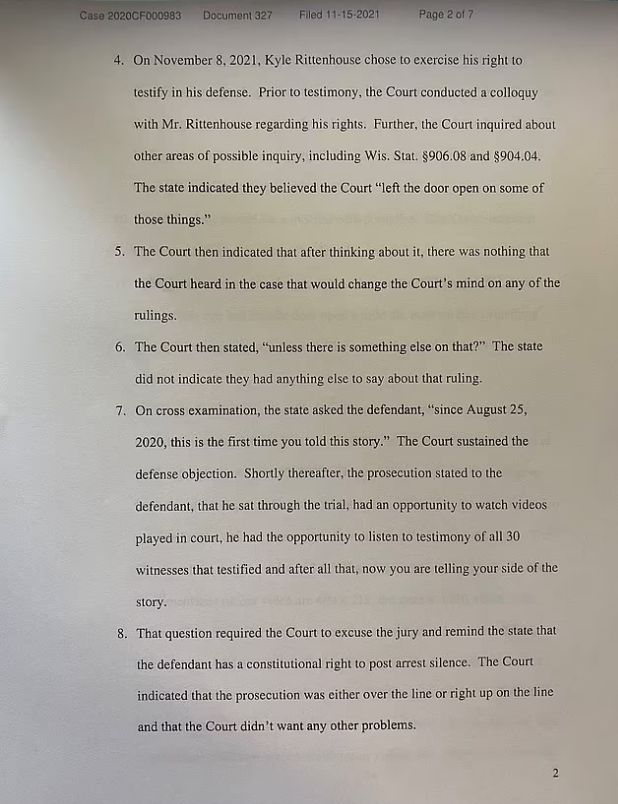 The third page of the motion discusses the state turning over to the defense drone footage. The defense team states that the prosecutors gave them compressed footage, while being in possession of higher definition footage. 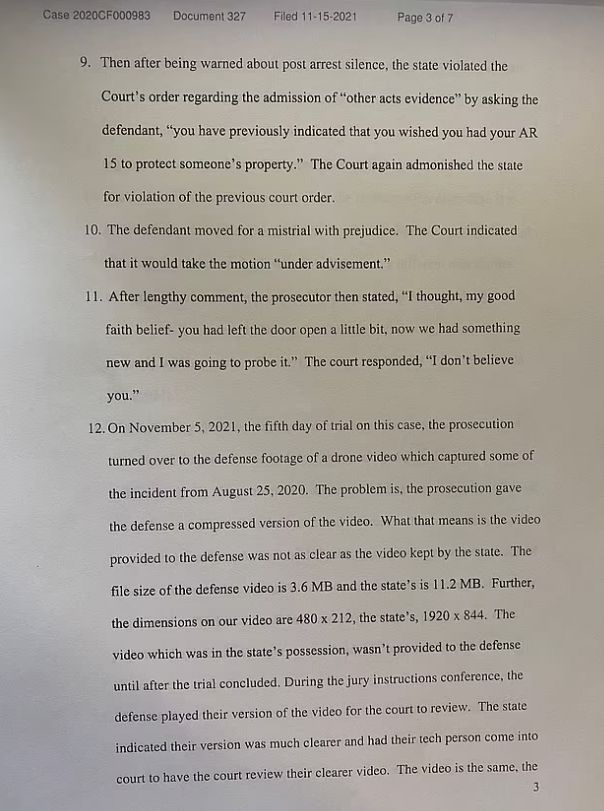 The fourth page of the motion states that prosecutorial “overreaching” can lead to a “mistrial” that would bar double jeopardy. In other words, Rittenhouse could not be tried again on the same charges. The defense argues that the prosecutors’ actions were “clearly intentional.” 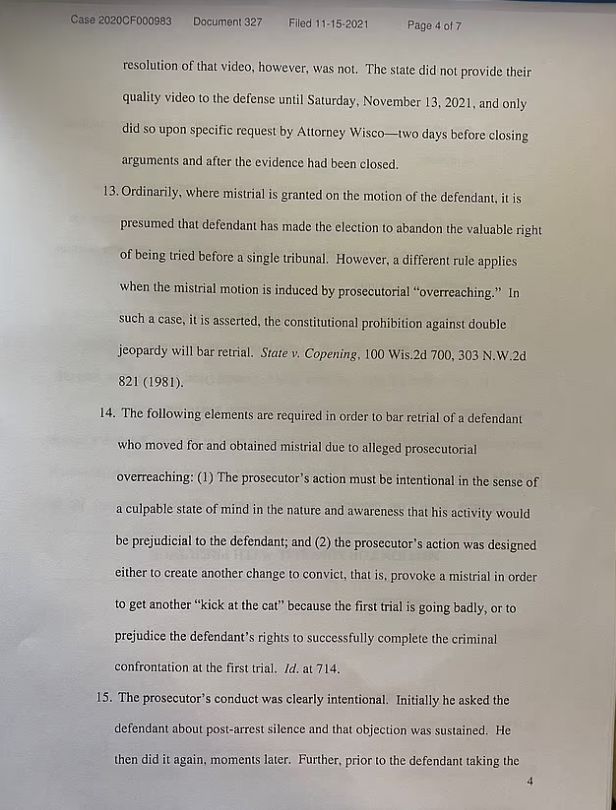 The fifth page of the motion argues that the prosecution has acted in “bad faith.” 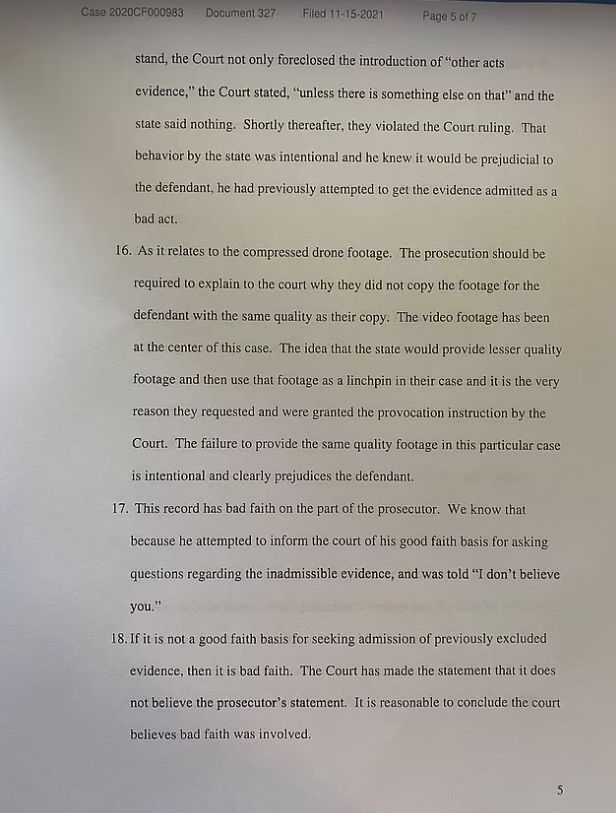 The sixth page of the motion further points out that the state has “repeatedly violated instructions from the Court, acted in bad faith and intentionally provided technological evidence which was different from theirs.” 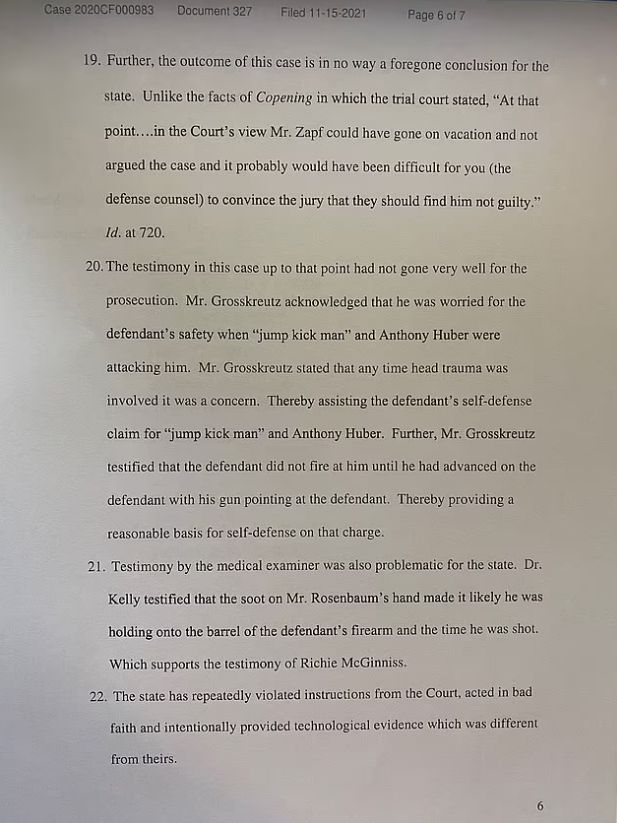 In closing, the motion states that the “defendant respectfully requests the Court find “prosecutorial overreaching” existed, that “overreaching was intentional and in bad faith,” and thereby grant the defendant’s motion for a mistrial with prejudice. 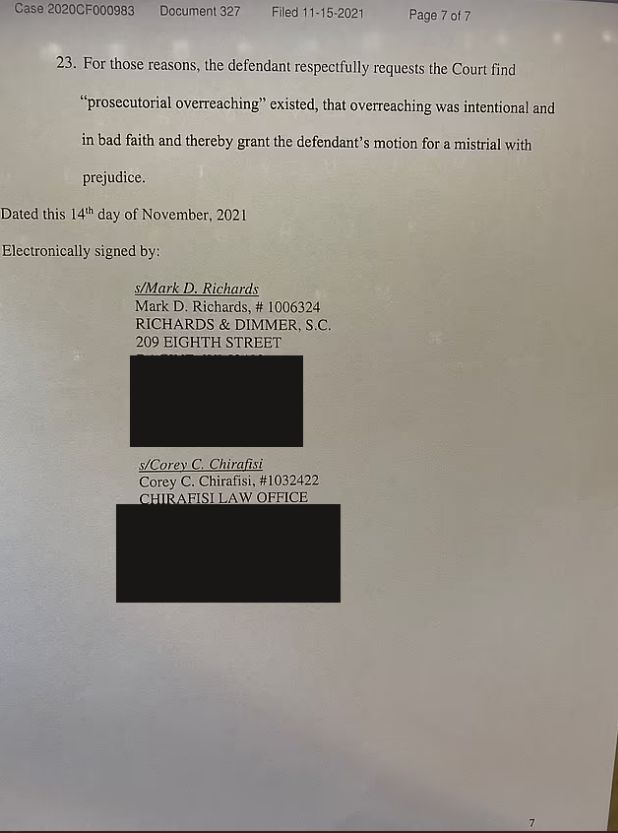 As earlier reported, there is a strong belief that the jurors are being intimidated. On Tuesday, Tucker Carlson argued that the jurors haven’t reached an “obvious verdict” because they fear that “Biden voters” will riot.

Tucker argued the verdict is so obvious that “no honest person could reach a different conclusion” than Rittenhouse  hadacted in self-defense.

Reportedly, two of the jurors are afraid to come forward with their verdicts, citing “backlash,” according to Human Events Senior Editor Jack Posobiec, who says his source is a U.S. Marshal in Kenosha.

One high-profile Minneapolis BLM activist named Cortez Rice, who was apparently close to George Floyd, said ominously that the jury is being watched.

“Your Honor, I didn’t know that under your black robes of justice you wear a white robe of the klan,” one email read. “There is no way a fair trial can be heard under your supervision. Better yet, resign.”

“Enjoy your term, judge, it’s going to be your LAST,” another read. “If I ever meet you in person, I fully intend to spit directly into your face, regardless the cost. You’re disgusting.”

“Make sure and tell Schroeder what a worthless piece of s*** he is,” one email said. “He’ll find out officially when his heart seizes up in a few years and he has to stand before a real judge.”

Schroeder said he had received “thousands of communications.” He promised that he would “deal with” the threatening email senders. “I wouldn’t want to be those people,” he added.

It is now in Judge Schroeder’s hands to decide that this case be ended with a “mistrial with prejudice.” Barring a mistrial, a verdict is expected to be rendered today or in the near future.

Kenosha Marshal Reveals Two Jurors are Hesitant to Come Forward with Rittenhouse Verdict Because They are Afraid of ‘Backlash’: Report