On Saturday, a large group of around 100 people wearing white masks, tan khakis and blue polo shirts, reportedly of the white supremacist group The Patriot Front, marched through the heart of downtown Boston.

Before conducting their “Freedom Trail Independence” March, the ‘Patriot Front’ demonstrators were confronted by activists as they came off of a train at Oak Grove Station in Cambridge, Massachusetts.

The police can be seen protecting ‘Patriot Front’ members as the activists shouted ‘Nazi cucks’ and other taunts at the ‘white nationalist’ group. Watch:

The video shows ‘Patriot Front’ members marching stoically throughout all of the taunts, until an unmasked member runs up to the videographer, who is credited as Rod Webber. The police officer immediately intervened. (The audio in the originally uploaded video drops intermittently and shows events in reverse.)

The masked ‘Patriot Front’ members, some of them reportedly identified as part of 31 members named in a Coeur d’Alene, Idaho bust for attempting to ‘incite a riot’ at a Pride event in June, suddenly began running in an attempt to cover out-of-state license plates on vehicles lined along the street. Reportedly, at least one of the plates was from Michigan.

The ‘Patriot Front’ members otherwise marched and distributed flyers at the Boston Public Library. There seems to have been an ‘attack’ against a black man near Copley Square, but no reported injuries. 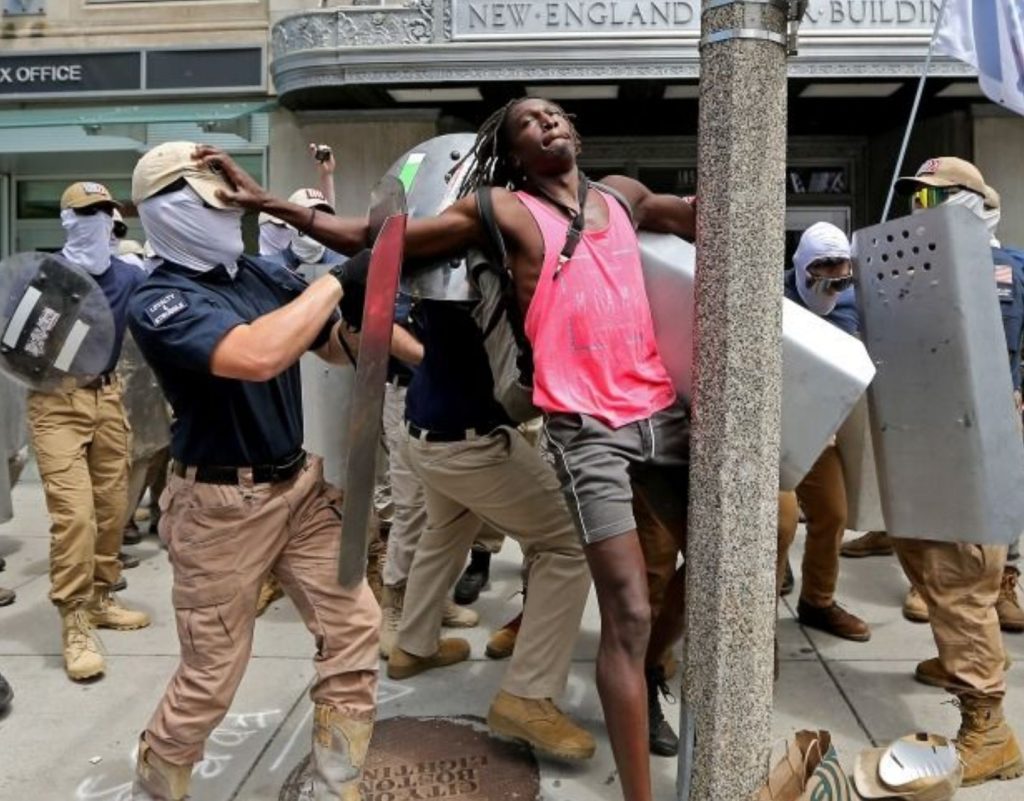 But like the Coeur d’Alene bust, the Boston march was largely “uneventful.” After the bust, one police officer admitted that they had “informants” in ‘Patriot Front.’

Then, it turns out, the FBI had been tracking the group for more than a year before Coeur d’Alene Police arrested a purported ‘small army’ of members at the Idaho Pride event. According to the Associated Press, among those arrested was Thomas Ryan Rousseau, identified by the Southern Poverty Law Center as founder of the group after the “Unite the Right” rally in Charlottesville, Virginia in 2017.

“Emails obtained through records requests by Property of the People, a Washington, DC-based transparency nonprofit, demonstrate that FBI agents in the area both reported and were updated on Patriot Front-related acts of vandalism as far back as August 2021,” Rolling Stone reported. “Those agents also helped Coeur d’Alene police prepare for Patriot Front’s alleged conspiracy to riot at a June Pride event, when local law enforcement arrested 31 members of the group.”

Key emails among the 1,200 pages of records between the FBI and Coeur d’Alene police can be read below.

FBI Emails on Patriot Front by Kyle Becker on Scribd

“I received a tip from Leif Sermon with the FBI,” a May 31 email from Criminal Intelligence Analyst Victoria Estrada says. “The tip was that the Panhandle PatriotClub threatened to physically assault individuals taking part in the pride parade in Idaho Falls on 6/25/2022. The threat was allegedly stated on a video made ty the club. The allegedly further stated, ‘If gays want a war, we’ll give them a war.’ Leif stated that the reporting party stated they would also attack the pride parade in Couer D’Alene on June 11.”

“I actually just found the video on YouTube regarding Coeur D’Alene,” Estrada added. The video has since been removed.

The arrest of the 31 ‘Patriot Front’ members prompted criticism online because of its theatrics and because it did not appear to square with law enforcement procedure. One former federal law enforcement officer deconstructed the ‘bullsh*t show’:

“They would not be giving it back until after processing and making bond for their arrest,” he added. “This megaphone right here, I know, would not be left on the individual.”

This refers to the infamous “Abolish the FBI” bullhorn that was widely misreported on the right as an “FBI” bullhorn. As a devil’s advocate question, who puts ‘Abolish the FBI‘ on a microphone, unless you’re the FBI? It has nothing to do with white supremacy. It smacks more of a plausible deniability tactic.

“After placing this individual in zip ties in restraints,” the narrator adds. “This is a false flag of bullsh*t show. None of this coincides with law enforcement procedures for detaining an individual and searching an individual. Hopefully y’all are not falling for this stupid bullsh*t.”

There are more questions about the ‘Patriot Front’ group as shown in videos regarding other events, such as a demonstration at the Lincoln Memorial in December.

It should be noted in regards to a video from earlier in December that it is not acceptable law enforcement practice to allow people to be transported in U-Hauls for safety reasons.

Whether or not the ‘Patriot Front’ is a real group of white nationalists or ‘front’ group being stage-managed by radical activists or federal agents, its activities are being overblown as a threat to the nation.

This is due in part to its deceptively small membership, which the group attempts to make seem larger with activities across state lines carried out by the same few dozen members. This is due also to the nature of the group’s activities, which pale in comparison to the Black Lives Matter riots of 2020 that killed dozens and did billions in damages to predominately black communities around America.

And this is also due to the suspect timing, which has coincided with relentless media and political attempts to paint the ‘MAGA’ (Make America Great Again) movement as somehow connected to a ‘Patriot Front’ group that boasts its mission is to ‘Reclaim America.’

As the nation celebrates Fourth of July weekend, America remembers the real ‘patriots’ who fought a war with the British to give people freedom. The khaki-wearing young men hiding behind masks are nothing like ‘patriots’ — and that may be the entire point.