After Brutal Crackdown on Freedom Convoy, Justin Trudeau Makes Announcement That is Absolutely Shocking the World 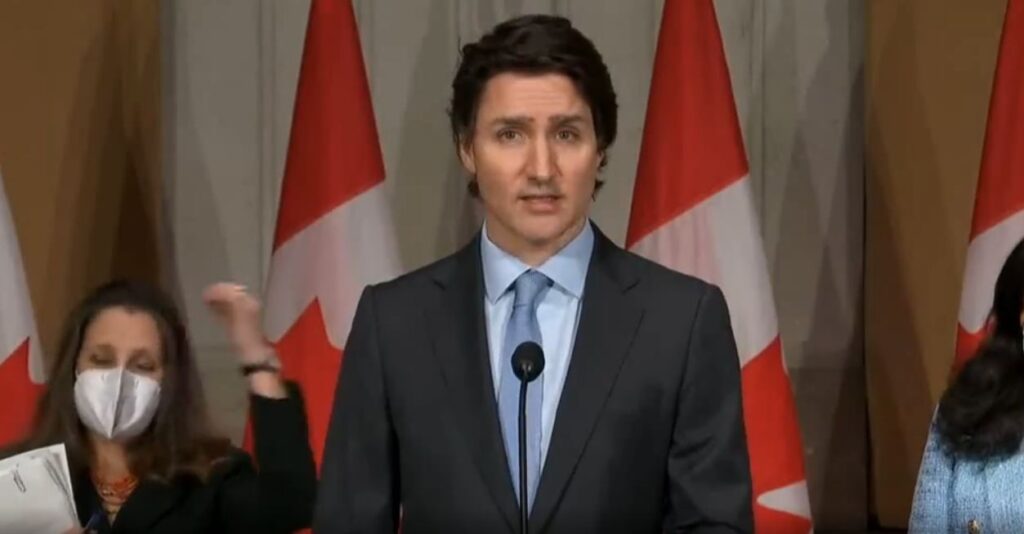 Canadian Prime Minister has been given “emergency powers” under the nation’s Emergencies Act to crush the Freedom Convoy movement to compel the government to recognize citizens’ basic human rights and freedoms.

The Emergencies Act grants him the authority to impose martial law, brand Canadians as enemies of the state without trial, seize their bank accounts, and make them political prisoners for decades. But don’t worry: Justin Trudeau is taking a stand. Watch:

“Canada and our allies will defend democracy,” Trudeau claimed. However, he wasn’t talking about Chinada Canada. The prime minister was referring to Ukraine.

“We are taking these actions today to stand against authoritarianism,” he went on. “The people of Ukraine, like all people must be free to determine their own future. We will continue working with our international of partners to safeguard Ukraine’s territorial integrity and prevent further Russian aggression.”

Meanwhile, Trudeau’s authoritarian regime is taking political prisoners and denying them bail — all for allegedly committing the heinous crime of “mischief.” Such is the case of Tamara Lich, a Freedom Convoy organizer who was denied bail on Tuesday and may face a decade in prison for her peaceful protest of Canada’s vaccine mandates.

“Tamara Lich, one of the leaders of Canada’s Freedom Convoy protests, was denied bail on Tuesday,” Newsweek reported. “The 49-year-old was charged with counseling to commit mischief by allegedly helping to organize the trucker protests against COVID-19 restrictions and vaccine mandates, CityNews Toronto reported.”

The Canadian government has arrested over 200 Freedom Convoy protesters under the Emergencies Act. The situation has developed much like the January 6th riot in the United States, when numerous peaceful protesters were let into the Capitol building while far-right extremists executed a pre-planned siege of the Electoral College. Most of those ‘MAGA tourists’ were swept up in the ensuing prosecution and held as political prisoners — charged with non-violent offenses such as ‘parading without a permit.’

Meanwhile, in the United States, Biden has filed for an extension of the purported “state of emergency” over the dwindling Covid-19 pandemic. The executive declaration to Congress comes as a Freedom Convoy makes its way across America to Washington D.C. for Biden’s State of the Union address.