After Two ‘Save America’ Rallies, Trump Shares What He Believes May Be America’s ‘Biggest Problem’

Donald Trump had a message to share after two massive “Save America” rallies: One in Ohio and one in Florida. He released his statement on Monday. 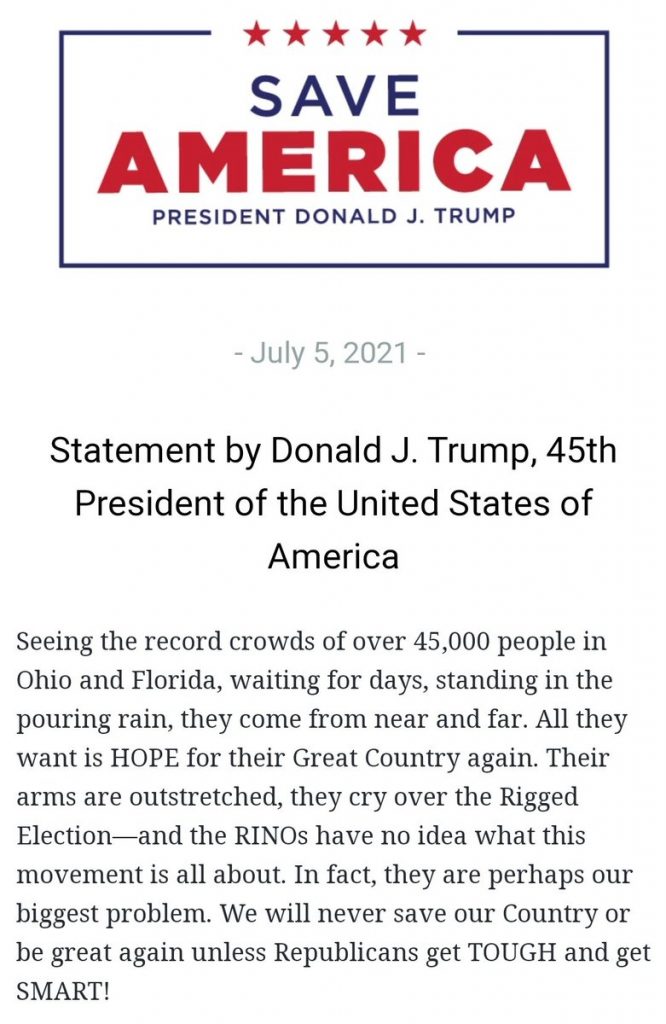 “Seeing the record crowds of over 45,000 people in Ohio and Florida, waiting for days, standing the the pouring rain, they come from near and far,” Trump said. “All they want is Hope for their Great Country again.”

“Their arms are outstretched, they cry over the Rigged Election–and the RINOs have no idea what this movement is all about,” he added.

“In fact, they are perhaps our biggest problem,” he continued. “We will never save our Country or be great again unless Republicans get TOUGH and get SMART!”

Donald Trump’s rallies in Ohio and in Sarasota, Florida mark the beginning of his “Save America” tour: A series of rallies to keep the nation’s patriotic spirit alive as conservatives work to retake the country from radical Marxist “Democrats” ahead of the mid-term and 2024 elections.

“Over the past four years, my administration delivered for Americans of all backgrounds like never before. Save America is about building on those accomplishments, supporting the brave conservatives who will define the future of the America First Movement, the future of our party, and the future of our beloved country,” said Trump in a statement.

YouTube took down Right Side Broadcasting Network’s coverage of Trump’s Ohio rally and actually gave the network a strike.

🚨 NEW: YouTube has removed RSBN's videos of President Trump's rally last week in Ohio and the speech from the NCGOP convention. They have also given us a strike, and we are suspended from live streaming for one week.

You can watch tomorrow's rally on Rumble or download our app. pic.twitter.com/tYnq4CWOiA

The unethical political censorship prompted RSBN to take their business to Rumble, where it accrued a record 400,000 live viewers from the Sarasota, Florida rally on July 3rd. It amassed an impressive 5 million total viewers.

Incredible – thank you all! 🇺🇸https://t.co/lMUb7rVp4J

These are the kind of numbers that can keep “Hope” alive for Trump supporters over the next few years. If the radical left thinks they can silence Americans simply by censoring social media, that will only force them to come out in droves, just like they did in Ohio and Florida.