‘All Options are on the Table’: Trump’s Plans for Revenge Against Big Tech

These technological tyrants censored the president for the paper-thin excuse  his dispute of election results constituted ‘incitement’ at the pre-planned capitol siege.

This act of censorship poses a threat to America’s elections moving forward. Donald Trump isn’t going to lie back and do nothing, new revelations show.

Jason Miller, a senior adviser to the former president, revealed the actions that Trump is planning in an interview on Breitbart News Saturday on SiriusXM 125, aka the Patriot Channel.

“I would expect that we will see the president reemerge on social media,” Miller said when asked what Trump plans to do next. “Whether that’s joining an existing platform or creating his new platform, there are a number of different options and a number of different meetings that they’ve been having on that front. Nothing is imminent on that.”

When asked whether that meant starting his own company, which Breitbart News referred to as “Trumper,” or joining another social media platform, Miller indicated that the situation is flued, but Trump is “going to be back on social media.”

“All options are on the table,” Miller said. “A number of things are being discussed. Stay tuned there because you know he’s going to be back on social media. We’re just kind of figuring out which avenue makes the most sense.”

While Facebook’s suspension is still indefinitely ongoing, and Twitter’s ban is apparently permanent, the president was reportedly in talks about joining one social media platform: Parler.

According to a Buzzfeed News report that is not reliable in its analysis of the prospective deal, based on reportedly viewed documents:

The Trump Organization negotiated on behalf of then-president Donald Trump to make Parler his primary social network, but it had a condition: an ownership stake in return for joining, according to documents and four people familiar with the conversations. The deal was never finalized…

The stake would have been as high as 40%, according to the reports, which didn’t make clear if and how Trump was personally involved in the negotiations.

That may be because Buzzfeed took the documents to launch into bizarre analysis and baseless invectives about Trump and Parler, as expected. Dan Bongino recently pushed back on reports that were issued from ousted CEO John Matze and offered positive news that he believes that Parler, a social media platform that was ganged up on and smeared by Big Tech giants, could be back as soon as Monday.

Donald Trump’s messages appear to have also returned to one social media platform: Gab. It was a statement on the Democrats’ impeachment vendetta that came via his attorneys, it said: 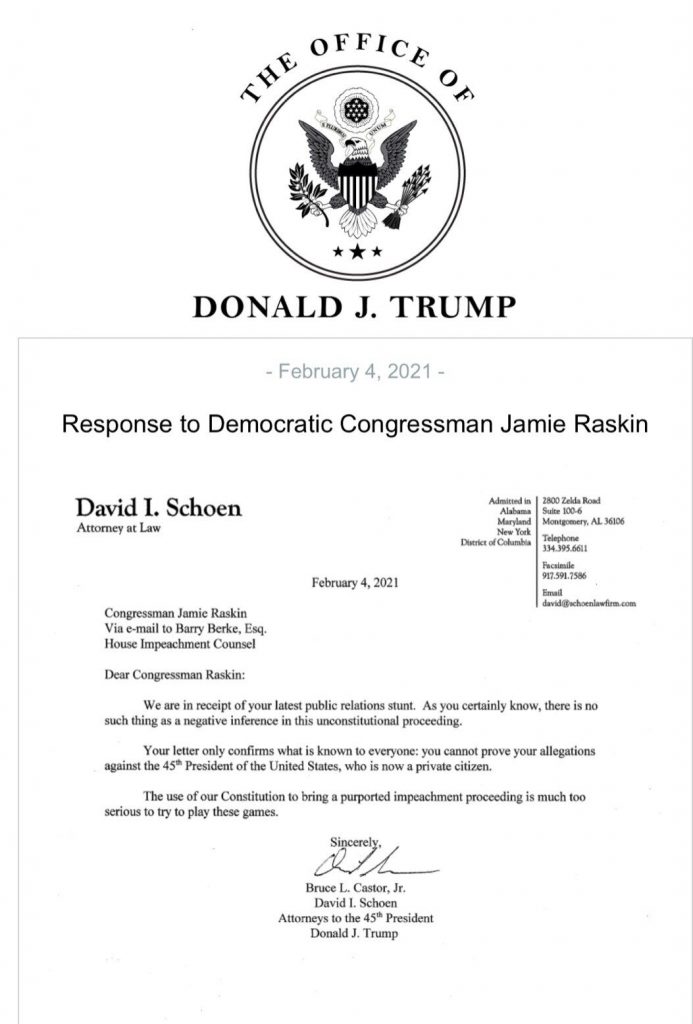 “We are in receipt of your latest public relations stunt. As our certainly know, there is no such thing as a negative inference in this unconstitutional proceeding.

Your letter only confirms what is known to everyone: you cannot prove your allegations against the 45th President of the United States, who is now a private citizen.

The use of our Constitution to bring a purported impeachment proceeding is much too serious to try to play these games.”

According to Newsweek, “The post has racked up more than 62,000 likes since Friday and Trump’s account has 1.4 million followers.”

Gab’s CEO Andrew Torba said Saturday that former President Donald Trump doesn’t use the Gab platform, contrary to earlier reports. Trump may just have to start his own.