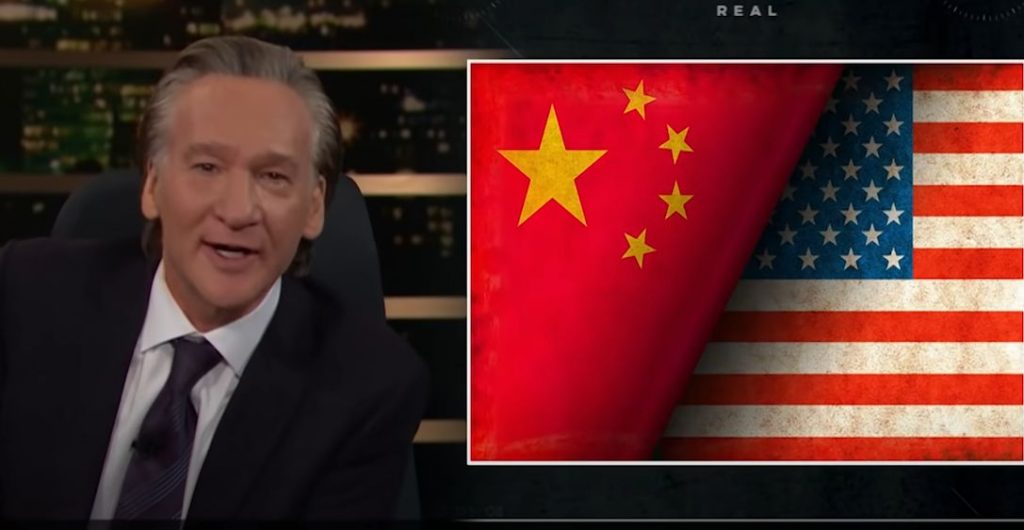 Bill Maher often gets a lot of things right, even if sometimes they are for the wrong reasons. On his latest ‘Real Time with Bill Maher,’ he went on a must-watch rant excoriating the silliness of the American people, while declaring China has already ‘won.’

“That’s the classic phrase from Lawrence of Arabia, when Lawrence tells his bedouin allies that as long as they stay a bunch of squabbling tribes, they will remain a silly people,” he continued. “Well, we’re the silly people now.”

“You know who doesn’t care that there’s a stereotype of a Chinese man in a Dr. Seuss book?” he asked. “China. All 1.4 billion of them could give a crouching tiger flying [expletive] because they’re not a silly people. If anything, they are as serious as a prison fight.”

“Look, we all know China does bad stuff. They break promises about Hong Kong autonomy, they put uighurs in camps and punish dissent and we don’t want to be that,” Maher went on. “But there’s got to be something between authoritarian government that tells everyone what to do and a representative government that can’t do anything at all.”

“In two generations, China has built 500 entire cities from scratch, moved the majority of their huge population from poverty to the middle class, and mostly cornered the market in 5g and pharmaceuticals,” he went on, although it is disputable whether China has much of a middle class. “Oh, they bought Africa,” he added, tongue-in-cheek.

“Their new silk road initiative is the biggest infrastructure project in history, connecting not just that continent but large parts of Asia, Europe and the Middle East to the people who built their roads, bridges, and ports,” he continued. “If you want to go anywhere in the world these days, you better have a yen for travel for travel.”

“In China alone, they have 40 000 kilometers of high-speed rail,” he went on. “America has… none. Our fastest train is the tram that goes around the zoo. California wanted to build high-speed rail connecting the entire state, but alas could not. We’re six billion in the hole just trying to finish the track connecting the vital hubs of Bakersfield and Merced. One small step for nobody, one giant leap if you’re a raisin.”

“On a national level, we’ve been having infrastructure week every week since 2009,” he added. “But we never do anything. Half the country is having a never-ending woke competition deciding whether Mr. Potato Head has a dick and the other half believes we have to stop the lizard people because they’re eating babies.” (Actually, the other half is telling the Woke people they’re mindless idiots.)

“We are a silly people,” he continued. “Even when we all agree on something like getting rid of the penny, no. The inertia, the ass covering, the graft, the lawyers, the cowardice, nothing ever moves in this impacted colon of a country.”

“We see a problem and we ignore it, lie about it, fight about it, endlessly litigate it, sunset clause it, kick it down the road and then write a bill where a half-assed solution doesn’t kick in for 10 years. China sees a problem and they fix it. They build a dam; we debate what to rename it.”

“That’s why their airports look like this [shows image] and ours look like this in [La Guardia airport sign.] San francisco — it took 10 years just to get two bus lines through environmental review,” Maher added. “The big dig, a tunnel in Boston, took 16 years and don’t get me started on my solar hookup [shows sign it has taken 11oo+ days].”

“China once put up a 57-story skyscraper in 19 days,” he continued. “They demolished and rebuilt the San Yuan Bridge in Beijing in 43 hours. We binge watch; they binge build. When COVID hit, Wuhan, the city, built a quarantine center with 4,000 rooms in 10 days and they barely had to use it because they quickly arrested the spread of the disease.”

“They were back to throwing raves in swimming pools while we were stuck at home surfing the dark web for black market charmin,” Maher continued. “We’re not losing to China, we lost. The returns just haven’t all come in.”

Maher continues on with a lot of truth-telling, which is at the least highly thought-provoking. While Maher wrongly glamorizes the Communist Chinese’s authoritarian regime in subtle ways, he offers enough criticism to show that he has no desire for the United States to actually be China.

If America wants to beat China, it can only start doing it when it stops being silly.