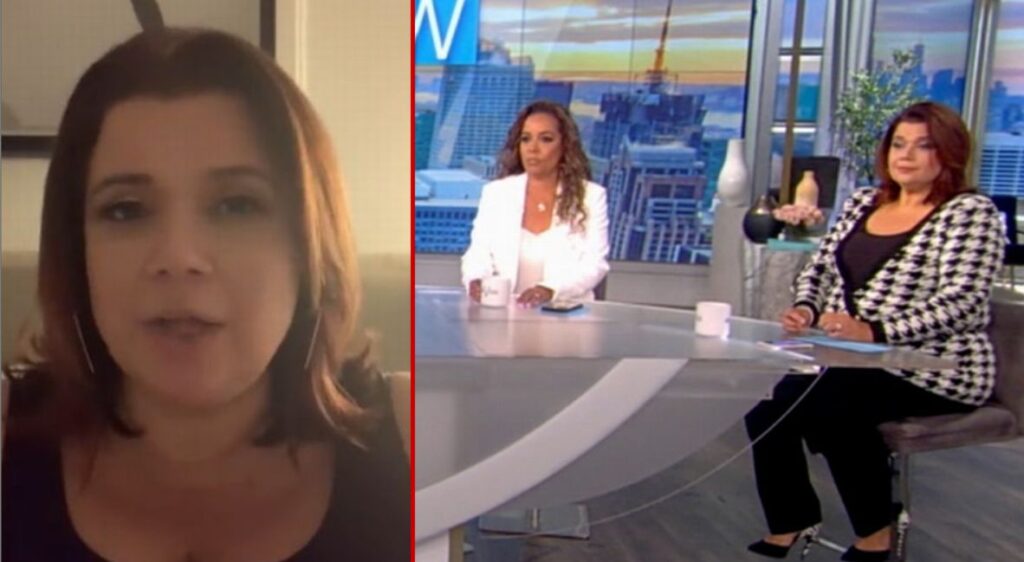 “The View” had another bizarre episode on Friday. A planned interview with Vice President Kamala Harris, amid swirling questions facing a struggling Biden administration, was abruptly interrupted by an implausibly odd stunt that saw two hosts walk off set mid-show with purported positive Covid diagnoses.

Co-hosts Sunny Hostin and Ana Navarro left mid-show after a producer interrupted the broadcast. The timing of the ‘news’ appeared to be suspicious for many viewers due to it delaying the Kamala Harris interview for approximately thirty minutes.

When the interview with Harris was finally conducted, it was held at a dimly lit studio on premises and blatantly avoided all manner of tough and timely questions. Fox News Contributor Joe Concha noted a number of questions the “View” failed to ask VP Harris.

Concha noted that “The View” co-hosts conveniently avoided questioning Harris about the drone attack that killed 7 children instead of ‘ISIS-K terrorists’ as the Biden administration had claimed, the FDA not approving booster shots as the Biden administration had planned, as well the French ambassador ‘excusing himself’ from the U.S. over a tri-lateral agreement flap involving nuclear-powered submarines.

“It was all to give the vice president confidence at a time when she is polling at 35 percent,” Concha said.

Adding fuel to the fire was the convenient “news” from Ana Navarro that she has now tested negative for Covid twice since the on-air incident.

Feeling good and hoping it was just an inopportune, very public false positive.

Please get vaccinated and stay safe folks, so we can beat this damn thing, once and for all. pic.twitter.com/rZp45Yboz0

The Hill reported that Navarro told Anderson Cooper about the incident on Friday:

“The View” co-host Ana Navarro said Friday evening that she has tested negative for COVID-19 after testing positive earlier in the day ahead of an interview with Vice President Harris.

Navarro confirmed on CNN’s “Anderson Cooper 360” that she’s since taken a rapid antigen test and a PCR test, both of which returned negative results. She said she is waiting for a third test so she can fly home to Miami.

Navarro applauded Harris’s team, the Secret Service and the team at “The View” for how the situation was handled.

The stunt was obviously timed to give the vice president political cover at a time when millions of Americans have serious questions about the struggling presidency. It is state propaganda of the lowest kind, and Americans are fed up with it.