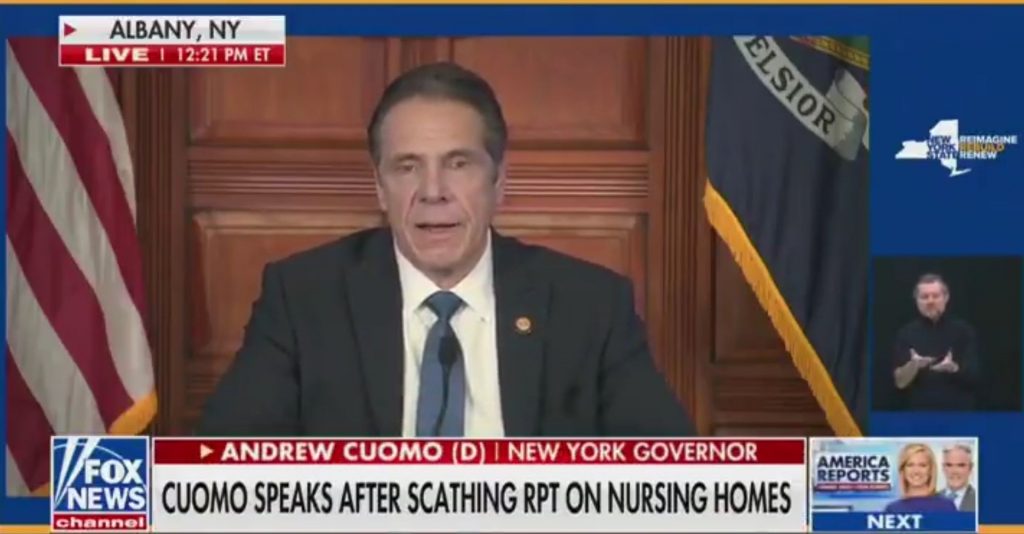 New York Governor Andrew Cuomo was widely condemned after a scathing report on misleading nursing home death death that was issued by his own Attorney General on Thursday.

It is so bad even CNN admitted the report made the Democratic governor’s disastrous performance look “less stellar.”

Cuomo appeared at his press conference today to address the valid questions about the misleading data. He seemed to have no conscience and no remorse as he told some really unconscionable lies.

When questioned about how nursing home residents’ deaths could be deceptively coded if they took place in a hospital or in transit, Cuomo shifted the blame.

“If you think there was a mistake, then go talk to the federal government. It’s not about pointing fingers or blame, this became a political football,” Cuomo replied.

Besides being a bald-faced lie, since states have sovereignty over their public health response, it exposes that Cuomo’s much-vaunted leadership skills are a media-generated myth.

There was a visceral reaction to Cuomo’s numerous insensitive remarks:

I still can’t believe @NYGovCuomo told everyone that his dad died and he wished he could blame someone. His dad didn’t die of Covid in a nursing home thanks to his son sending infected patient into his facility.

The Federal Government didn’t force Cuomo to send Covid patients to nursing homes. He did that all on his own. The federal government *allowed *each state to make decisions that were appropriate fir their unique needs. As it should be. https://t.co/jLG4OSmsi6

Cuomo is a disgusting, pathetic little man. No one w such a lack of human compassion should ever be in charge of other people’s lives.

I think it’s safe to say at this point that @andrewcuomo conned the national media on his COVID leadership. He made a horrendous decision on nursing homes and then covered it up on the death counts. Shame on him. But also shame on the journalists who couldn’t stop swooning.

The lies and disrespect directed towards Janice Dean, in particular, are enough to expose Cuomo as a truly remorseless human being.

.@JaniceDean lost two family members in a New York nursing home early in the pandemic—and she's been fighting to expose Cuomo's role in the thousands of tragic and avoidable nursing home deaths ever since.

Today families are closer than ever to answers and justice thanks to her. pic.twitter.com/9fpRSIX2UW

After all the grief she took from Democrats protecting Gov. @andrewcuomo – i.e. “she should stick to weather” – @JaniceDean should feel vindicated today with this report on deaths in NY nursing homes – Proud of you JD. #mostlysunny

FINALLY: NY AG releases report showing COVID-19 nursing home deaths 'may have been undercounted by as much as 50%'

Thank God for @JaniceDean! Let's get @NYGovCuomo to answer to this report! https://t.co/cLZyu3BcBe

The New York Attorney General showed that it is possible for public figures to take steps in the direction of political accountability for the good of the country. But the American people will need to keep pressing and pressuring them all to do the right thing harder than ever.