Congresswoman Alexandria Ocasio-Cortez wants her base to know that even though people of color are dying in droves in inner cities (due to radical policies like “Defund the Police”) that there is no reason to worry about it.

“I’ve seen these headlines about percentage increases,” she said.

“Now, I want to say that any amount of harm is unacceptable and too much, but I also want to make sure that this hysteria, you know that this doesn’t drive a hysteria, and that we look at these numbers in context, so that we can make responsible decisions about what to allocate in that context,” she said in a Zoom call on Friday.

Fine. Let’s look at the numbers “in context.” 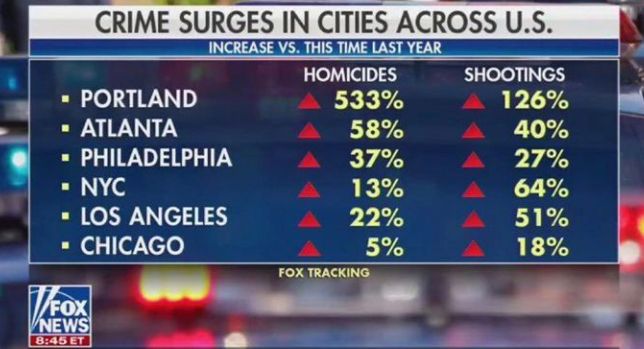 Here are the crime rates in major cities versus the same time last year, as reported by Fox Tracking.

What ‘Squad’ members like AOC won’t admit is that ‘Defund the Police’ was always destined to be a failure. As America’s inner cities exploded into violence — including rioting, looting and murder — radical Democrats nonetheless scapegoated police for the predictable results of their incendiary rhetoric and anti-police policies.

One of the most visible cases of rapid decline has been New York City. Recently, as if a touchstone commentary on city streets becoming a ‘warzone,’ two children in the Bronx were nearly killed by a gunman last week.

This is the Bronx. This is in AOC’s backyard.

This is nothing to worry about Congresswoman? As persons of color continue to suffer, why don’t Democrats ever reconsider their radical policies? Perhaps they simply don’t care as much as they pretend?

It’s worth considering as radical Democrats like Ocasio-Cortez constantly push for Americans to be ‘hysterical’ about imaginary problems.

Dad *DESTROYS* School Board in Epic Rant on America, Then Demands All of Them Resign