AOC Throws on a Mask for an Outdoor Photo-Op, Watch What She Does the Second It’s Over 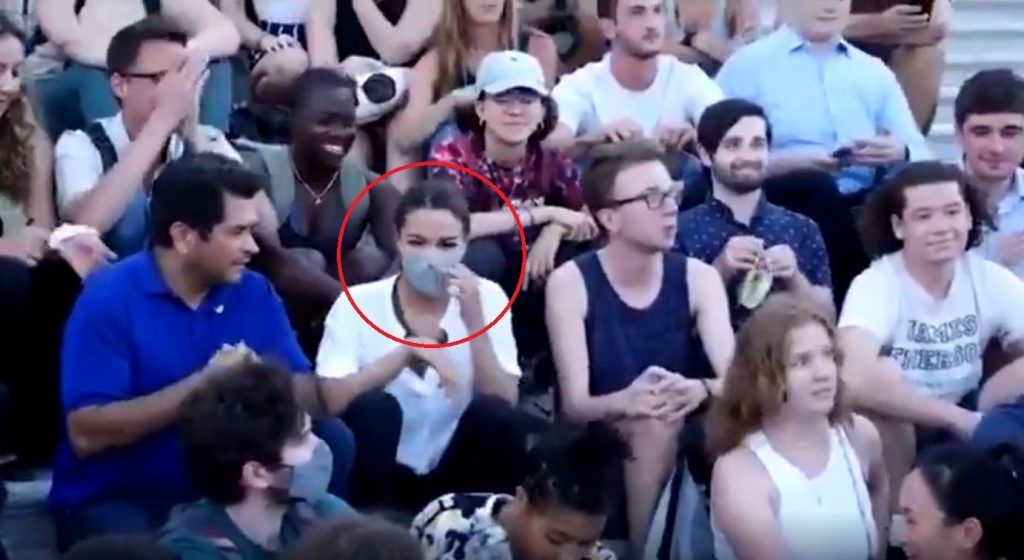 Rep. Alexandria Ocasio-Cortez once again that Democrats’ concern for the COVID-19 threat is merely for public show. On Wednesday, a video of AOC surfaced of the Democrat diva throwing on a mask for a photo-op.

The video was obtained exclusively by Breitbart News. Watch what she does moments after the photo is over:

One minute after the photo-op ended, she tears her masks off and yucks it up with the young people  gathered on the steps for the protest.

“Oh, Cori had to run do a… she had to run do a hit,” you can hear her say. The sit-in protest was organized by Cori Bush and called for an extension to the national moratorium on evictions.

“The emergence of the delta variant has led to a rapid acceleration of community transmission in the United States, putting more Americans at increased risk, especially if they are unvaccinated,” she said.

“This moratorium is the right thing to do to keep people in their homes and out of congregate settings where Covid-19 spreads,” Walensky added.

On Tuesday, President Biden caved and issued an order to extend the moratorium, while knowing that it was completely unconstitutional and likely to be struck down.

The CDC is thus setting national policy and the White House is issuing unconstitutional executive orders based on its unscientific rationales. The Democrats pretend to follow the irrational decrees, because it is all a political game to them.

The Democrats who have thus far been caught without wearing a mask indoors, in public, after the CDC’s updated guidance, include: Speaker Nancy Pelosi, Rep. Jerry Nadler, and D.C. Mayor Muriel Bowser.

Chicago Mayor Lori Lightfoot recently attended a gathering of 100,000 people for Lollapalooza, while recommending that everyone wear masks down to age 2, regardless of vaccination.

The only thing phonier than the credibility of the CDC at this point is Democrats feigning to show concern about the Delta variant. They tout CDC guidelines on wearing masks, then violate the rules repeatedly themselves when they believe nobody’s looking.

Watch: Not Even 48 Hours After Announcing New ‘Mask Mandate,” Speaker Pelosi is Busted Violating It