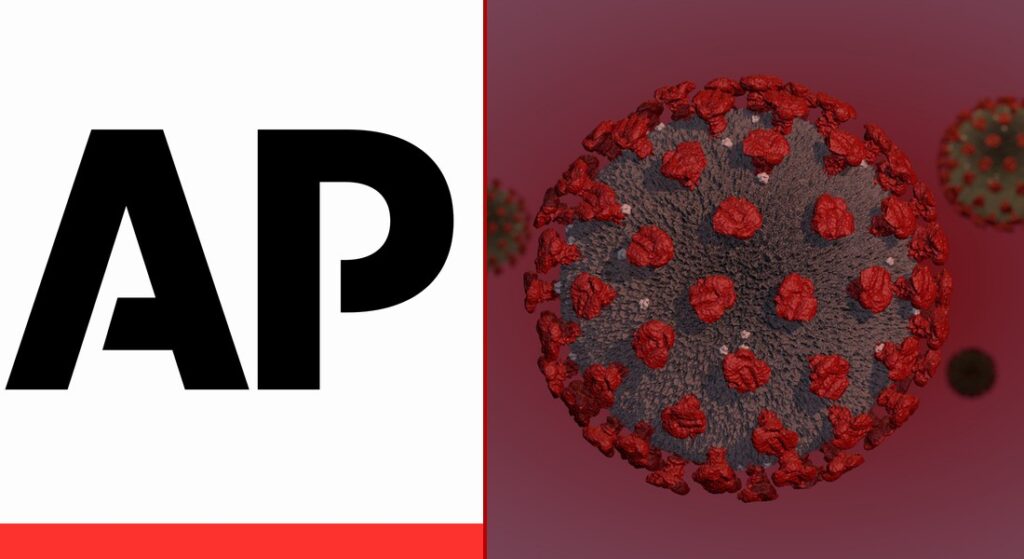 The Associated Press has been sinking to new depths of journalistic dishonesty under the ‘leadership’ of its new CEO Daisy Veerasingham. The AP has been in decline for years, but its editorializing on the 2020 election and Covid reportage have broken the agency. It is no longer a trustworthy and reliable source of information. The AP is a publisher of left-wing editorials posing as objective reportage. More importantly, the AP’s reports are not marked as ‘opinion’ stories – even as many of them are highly misleading.

One of the most flagrant examples of misleading reportage with profound consequences on how people (mis-) understand the Covid pandemic relates to the inexplicably ‘controversial’ topic of natural immunity. In a sane world, the topic of natural immunity is not controversial. It is well established as a scientific fact about viruses and immune systems that is rooted in decades of medical research. But AP is attempting to conduct a Pravda-like whitewashing of the medical record for the purposes of pushing universal vaccination, regardless of Covid risk.

Posts continue to circulate online falsely claiming that COVID-19 survivors don’t need vaccines because of natural immunity. In fact, that protection is variable and not long-lasting, so vaccines are still recommended. Here’s our recent look at this claim. https://t.co/NHiepR24T1

The Associated Press recently issued a “fact check” on natural immunity to attempt to dispel the well-founded and widespread belief that prior infection with Covid confers long-lasting protection against the virus.

“Posts continue to circulate online falsely claiming that COVID-19 survivors don’t need vaccines because of natural immunity. In fact, that protection is variable and not long-lasting, so vaccines are still recommended. Here’s our recent look at this claim.”

One would expect with such a build-up that the Associated Press must have conducted some groundbreaking new scientific research to dispel a working assumption that doctors have been relying on for decades. Instead, what we find is a tiny cherry-picked study that the AP is putting up against mountains of evidence to the contrary.

But this is not the case, according to a report Friday from the Centers for Disease Control and Prevention. The report highlights a study that found those who were infected with COVID-19 but never vaccinated had a higher risk of reinfection than those who had been vaccinated. The study, conducted in Kentucky, examined residents with lab-confirmed infections in 2020.

The CDC study adds to growing laboratory evidence that people who had one bout of COVID-19 get a dramatic boost in virus-fighting immune cells — and a bonus of broader protection against new mutants — when they’re vaccinated.

This is a breathtakingly dishonest account of the scientific evidence that prior infection provides robust and long-lasting protection against all viruses – including Covid-19. It is so misleading that one has to presume that this is a piece that belies ulterior motives; quite simply, the drive for universal vaccination regardless of risk.

The Washington Post recently published a “perspective” piece that nonetheless is far more trustworthy and reliable than the AP’s purported ‘fact check.’ It produces an overview of the current state of the medical literature:

It’s okay to have an incorrect scientific hypothesis. But when new data proves it wrong, you have to adapt. Unfortunately, many elected leaders and public health officials have held on far too long to the hypothesis that natural immunity offers unreliable protection against covid-19 — a contention that is being rapidly debunked by science.

More than 15 studies have demonstrated the power of immunity acquired by previously having the virus. A 700,000-person study from Israel two weeks ago found that those who had experienced prior infections were 27 times less likely to get a second symptomatic covid infection than those who were vaccinated. This affirmed a June Cleveland Clinic study of health-care workers (who are often exposed to the virus), in which none who had previously tested positive for the coronavirus got reinfected. The study authors concluded that “individuals who have had SARS-CoV-2 infection are unlikely to benefit from covid-19 vaccination.” And in May, a Washington University study found that even a mild covid infection resulted in long-lasting immunity.

The Israeli study referenced above has a conclusion that is concise and direct:

“This study demonstrated that natural immunity confers longer lasting and stronger protection against infection, symptomatic disease and hospitalization caused by the Delta variant of SARS-CoV-2, compared to the BNT162b2 two-dose vaccine-induced immunity.”

The motive for misleading the American people about the science of natural immunity becomes abundantly clear in the above-cited Washington Post article:

So, the emerging science suggests that natural immunity is as good as or better than vaccine-induced immunity. That’s why it’s so frustrating that the Biden administration has repeatedly argued that immunity conferred by vaccines is preferable to immunity caused by natural infection, as NIH director Francis Collins told Fox News host told Bret Baier a few weeks ago. That rigid adherence to an outdated theory is also reflected in President Biden’s recent announcement that large companies must require their employees to get vaccinated or submit to regular testing, regardless of whether they previously had the virus.

The Biden administration is pushing federal mandates to get millions of Americans vaccinated, regardless of prior infection or personal risk. The vaccination mandate makes little sense, since the CDC Director admitted a month ago that the vaccines don’t prevent the spread of the virus. Contrary to arguments to the contrary, the viral loads in the vaccinated and unvaccinated may indeed prove to be similar, as the CDC stated in July.

“Today, some of those data were published in CDC’s Morbidity and Mortality Weekly Report (MMWR), demonstrating that Delta infection resulted in similarly high SARS-CoV-2 viral loads in vaccinated and unvaccinated people,” the CDC report said. “High viral loads suggest an increased risk of transmission and raised concern that, unlike with other variants, vaccinated people infected with Delta can transmit the virus.”

The implications for natural immunity as an alternative to yearly boosters, similar to seasonal flu shots, are profound given the sheer numbers of Americans who have been infected with Covid. The CDC’s own figures estimate that at least 120 million Americans had been infected with Covid-19 by the end of May, thus possessing superior natural immunity. That figure can be projected to be at least 150 million currently, due to the Delta variant wave and the estimate that there are four cases for every one reported.

When you factor in the cost of the vaccines, the adverse effects of heart inflammation reported in younger populations, and promising new treatments like Regeneron monoclonal antibody treatment and oral treatment molnupiravir, the justification for universal vaccination regardless of risk crumbles under scrutiny.

The Biden administration has made repeated false claims about Covid-19 and the vaccines.

“That, too, is a slight exaggeration, although hospitalizations and deaths among vaccinated people are extremely rare,” Politifact added in its July editorial.

However, that is no longer the case. The Delta variant has become the predominant driver of Covid-19 and it is taking hold in highly vaccinated communities. There have even been thousands of hospitalizations and deaths among the ‘fully vaccinated’ population.

“As of Aug. 30, the Centers for Disease Control and Prevention had received reports of 12,908 patients with breakthrough infections who were hospitalized or died,” Yale noted in early September.

Senator Ron Johnson unearthed even more disturbing statistics in England: “Of the 600,000 new cases of Delta, of the over 2,500 deaths, 63% of those deaths, 1,613 people, were the fully vaccinated. Twenty-eight percent were with the unvaxxed.”

A fact check of Public Health England’s technical briefing shows that he is right: Those are the figures reported.

Nonetheless, Dr. Anthony Fauci, head of the National Institute for Allegy and Infectious Disease (NIAID), in September failed to recognized the research that shows natural immunity is as good or superior to vaccinated immunity.

“There was a study that came out of Israel on natural immunity,” CNN’s Chief Medical Correspondent Dr. Sanjay Gupta began, “And basically, the headline was: Natural immunity provides a lot of protection, even better than the vaccine alone. What are people to make of that? So as we talk about vaccine mandates, I get calls all the time, people say, ‘I’ve already had Covid. I am protected. And now the study says, even more protected than the vaccine alone.’ Should they also get the vaccine? How do you make the case to them?”

this is called ‘narrative collapse’

Biden’s White House medical advisor Dr Fauci on previously infected Americans and why they should still get vaccinated if shown to have stronger NATURAL IMMUNITY:

“I don’t have a really firm answer for you on that”pic.twitter.com/j8x0127tLm

“I don’t have a really firm answer for you on that. That’s something that we’re going to have to discuss regarding the durability of the response,” Fauci said.

It appears that part of that ‘firm answer’ is putting out misinformation that natural immunity isn’t really effective enough and vaccines are necessary, even as the risk is already miniscule for younger populations.  It should also not be missed that medical agencies and news outlets rarely if ever mention antibodies, which would be a direct test to show that an American already has a level of immunity against Covid-19.

“So you presume, somehow, to tell over a hundred million Americans who have survived Covid that we have no right to determine our own medical care?” Paul said.

“You alone are on high and you’ve made these decisions, a lawyer with no scientific background, no medical degree,” he said. “This is an arrogance coupled with an authoritarianism that is unseemly and un-American.”

“You, sir, are the one ignoring the science,” he added. “The vast preponderance of scientific studies, dozens and dozens, show robust, long-lasting immunity after Covid infection.”

“Even the CDC does not recommend a measles vaccine if you have measles immunity,” he went on. “The same was true for smallpox. But you ignore history and science to shame the ‘flat earthers’ as you call them.”

“You should be ashamed of yourself and apologize to the American people for being dishonest about naturally acquired immunity,” he said.

The Associated Press should also apologize for its dishonesty. Sadly, that would not mean that the American people can stop doing its own research on public policy issues. That time has long passed.

More Vaccines, More Covid: Why are Case Rates Exploding in Areas with High Levels of Vaccination?