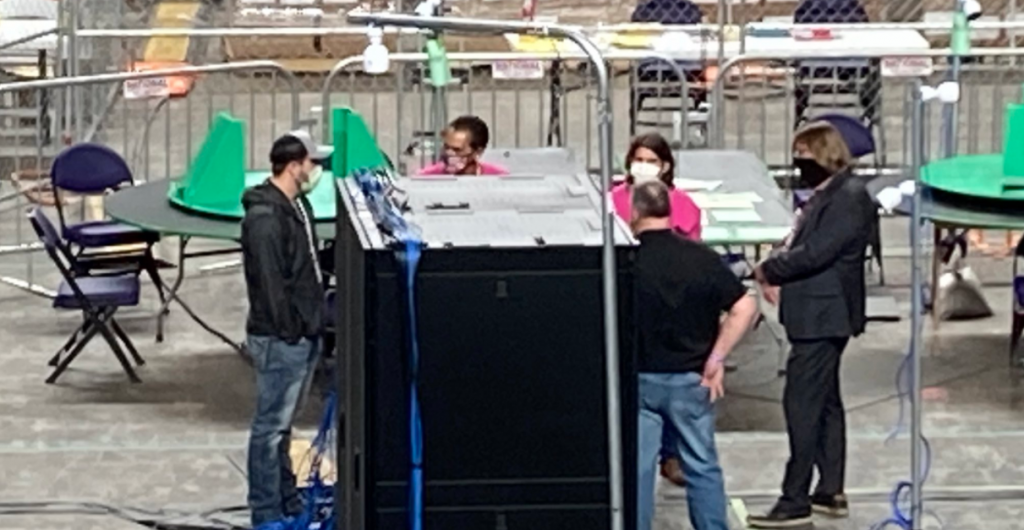 Arizona Secretary of State Katie Hobbs is sounding alarms over a Wi-Fi router that her staff observed at the Maricopa County election audit, which she argues could pose a threat to the integrity of the audit.

🚨 Yesterday, observers from my office discovered a WiFi router connected to the "audit" servers.

The Maricopa Arizona Audit account explained what Hobbs was purporting to see.

“No wireless was ever enabled. This was explicitly explained to the SoS observers on site. We are open to providing all passwords and access needed for a forensic investigation of the router if requested,” the @ArizonaAudit account explained.

The Arizona State Senate called an emergency session on Friday to issue a warning to stalling Maricopa County election officials that they must provide missing passwords to voting machines that they claim they ‘do not have,’ and also the withheld routers that obstructing officials claim could ‘allow access to sensitive law enforcement data.’

The possibility that Maricopa County did not even have the passwords to the voting machines, while a private company did, would be an egregious abuse of public trust. Furthermore, the refusal to provide the routers demanded by the Arizona state senate raises even more red flags. Just the News reported on the matter on Thursday.

“A Monday letter sent from the Maricopa County Attorney’s Office to Ken Bennett, the former Arizona secretary of state and the liaison between the state Senate and the auditors, said the county had elected not to turn over ‘several routers’ requested by the legislature due to an alleged ‘significant security risk to law enforcement data utilized by the Maricopa County Sheriff’s Office as well as numerous federal agencies’,” the report continued.

“We had previously believed that the risk would be eliminated by redacting the law enforcement data on the routers and not producing it,” Bennett’s letter states. “But we were informed that redaction did not eliminate the risk.”

Maricopa County officials are willing and/or unable to turn over passwords to voting machines and routers to the independent election auditors contracted by the Arizona State Senate, yet the Secretary of State has decided to complain instead about auditors potentially accessing voter data.

Hobbs is inadvertently making the case that Maricopa County election officials’ lack of cooperation makes a true forensic audit impossible. That seems to be exactly the point.