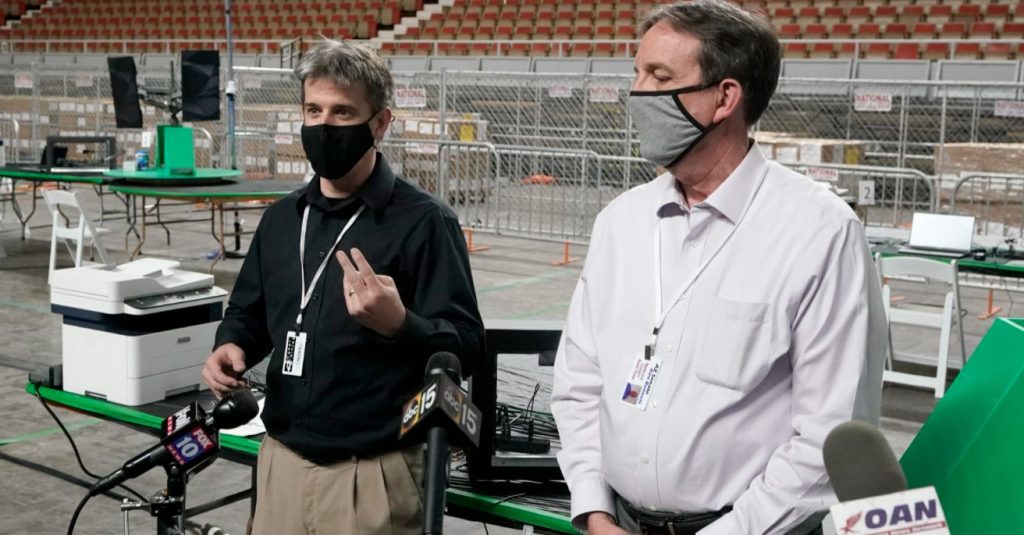 The Arizona election audit has hit a snag once again since several Cyber Ninjas employees, who are conducting the independent audit, reportedly tested positive for Covid-19 on Monday.

“The team expected to have the full draft ready for the Senate today, but unfortunately Cyber Ninjas CEO Doug Logan and two other members of the five-person audit team have tested positive for COVID-19 and are quite sick,” Arizona Senate President Karen Fann said in a statement.

The election audit draft report was expected to be submitted on Monday,

“Got this directly from Karen Fann. The draft report should be finished this coming week,” Wendy Rogers said on Saturday. “Then the AZ Senate’s specialized legal team will comb through it. This team includes the auditor, Senate president, Senate Judiciary chair, attorneys, and key Senate staff.”

“They will verify the draft for accuracy, proof of documentation, and clarity,” Rogers continued. “The AZ Senate will only issue a report that can be proven and is void of possible misinterpretation. Once these specialized Senate experts fully examine this report, the auditors will then prepare the final report, which will be presented to AZ Senate Judiciary Committee and the public.”

The update comes prior to a Trump rally in Cullman, Alabama on Saturday night. Donald Trump in mid-July reacted to the findings of the Arizona Senate’s update on the preliminary independent audit findings.

“Thankfully, Arizona has strong State Senators willing to fight for the truth. Senator Wendy Rogers says ‘I have heard enough. It’s time to decertify this election’,” he continued. “Senator Kelly Townsend said the fraud was so bad ‘I want to see indictments.’ Senator Sonny Borrelli says “’I’ve seen enough evidence to challenge the validity of the certification of the Maricopa County Election results’,” he said.

“Arizona shows Fraud and Voting Irregularities many times more than would be needed to change the outcome of the Election,” Trump concluded.

Arizona Senate President Karen Fann in July held a public briefing with the leaders of the ongoing election audit that she authorized. The auditors’ update claimed that 74,000 absentee ballots lacked documentation, thousands of ballots were duplicated without proper documentation, and over 11,000 voters were not on the November election voter rolls, but showed up later on the December voter rolls. Maricopa County then disputed to the claims.

Donald Trump lost Arizona to Joe Biden by 10,457 votes, or merely 0.3 percent of the state’s certified count in 2020. The Arizona audit results will be highly scrutinized for evidence that the state was improperly lost in the 2020 election.