The Biden administration blocked a charter flight evacuating American citizens and Afghan green card holders from landing in the United States, according to a humanitarian group conducting evacuations in Afghanistan.

News of the denial was announced by the evacuation organization Project Dynamo on Tuesday.

“Today’s triumph is ending in tragedy,” Project Dynamo announced on Instagram. “After initial approval, the US government is now denying entry into the US for our American passengers aboard Dynamo 01.” 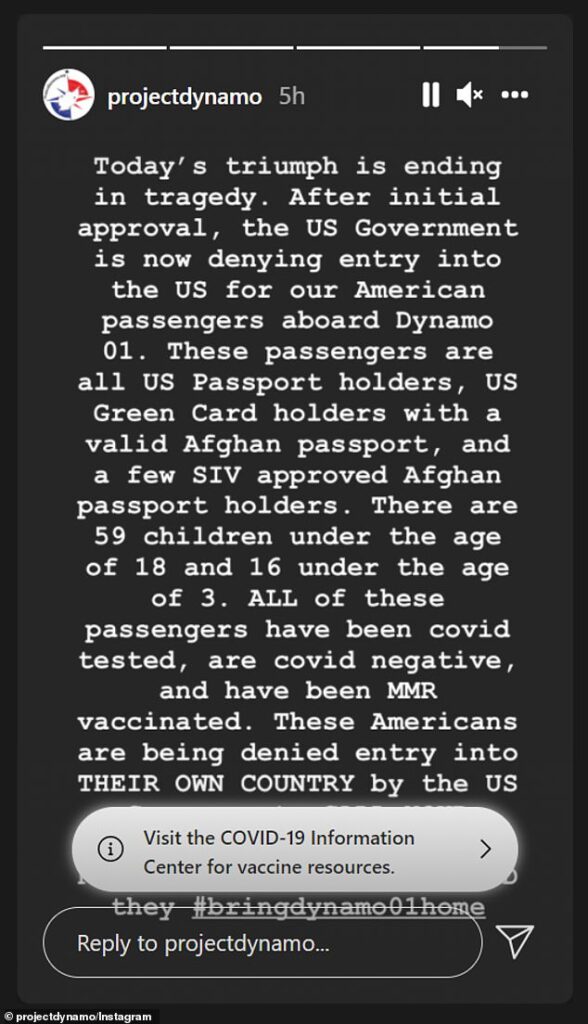 ‘These Americans are being denied entry into THEIR OWN COUNTRY by the US government.’

Bryan Stern explained that he had obtained permission from the Taliban-run Afghan Civil Aviation Authority before sending a charter flight to rescue the passengers from Kabul airport.

The State Department and the United Arab Emirate’s Ministry of Foreign Affairs also cooperated with the effort, Stern said.

“A Department of Homeland Security official claimed it was because authorities need time to conduct background checks on those on board,” the Daily Mail reported.

Stern said “Customs had cleared his charter flight to land at in New York but later changed the clearance to Dulles International Airport outside Washington before denying the plane landing rights anywhere in the US,” the Daily Mail noted.

“The plane was held on the tarmac in Abu Dhabi for 14 hours amid the debacle yesterday after taking off from Kabul Airport with 117 on board, among them 59 children,” the report added.

“Military lawyer and retired Marine Eric Montalvo shared the communications with Fox after he organized some of the flights and now claims the federal government thwarted his rescue effort,” the Daily Mail reported. “The leaked emails show State officials refusing to allow Montalvo’s privately paid for flights to use US property either inside the country or at one of its many overseas bases, after the Biden administration pledged to do whatever it can to rescue all Americans and as many Afghan allies as possible.”

“No independent charters are allowed’ at Al Udeid Air Base in Qatar,” the September 1 email says. “In fact, no charters are allowed to land at an [sic] DoD base and most if not all countries in the Middle Eastern region, with the exception of perhaps Saudi Arabia will allow charters to land.”

“The Biden administration has issued orders that will make the unauthorized rescue and extraction missions to get Americans and Afghan allies out of country significantly more difficult,” the report said. “Amid widespread reports of rescue efforts from groups like Task Force Pineapple, Task Force Dunkirk, and Team America, the U.S. State Department has issued an advisery to nations surrounding Afghanistan to deny support to aircraft conducting such operations in Afghanistan.”

Military-connected sources told Becker News the rationale behind denying private flights to be refueled in the region is that air space was being cleared for further evacuations. But that explanation conflicted with reports that evacuations from Kabul airport had been halted.

Meanwhile, the White House is making it easier for illegal migrants to get into the country than Americans seeking to flee the war-torn country of Afghanistan in the wake of the Biden administration’s reckless withdrawal.

“During Monday’s daily press briefing, Psaki was pressed on why there are so many steps pertaining to COVID-19 when flying into the country, such as providing vaccination proof or a negative COVID-19 test, but seemingly none for those who walk across the border,” the NY Post reported.

“As individuals come across the border, and they are both assessed for whether they have any symptoms, if they have symptoms they are,” Psaki said.

“The intention is for them to be quarantined. That is our process, they’re not intending to stay here for a lengthy period of time, I don’t think it’s the same thing. It’s not the same thing,” she claimed.

The State Department says there are still 100 Americans in Afghanistan who are “ready to depart,” according to journalist Emily Miller. The Biden administration earlier promised that all Americans would be evacuated before the August 31 deadline or troops would stay behind to ensure that they got out safely.

Not only was that promise broken, the White House has actually thwarted Americans and U.S. allies attempting to flee Afghanistan. The Biden administration’s actions are worse than incompetence; they are fundamentally anti-American.