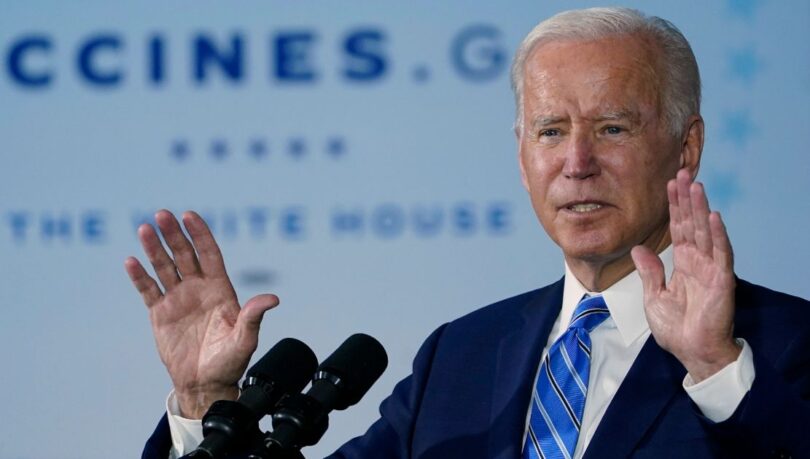 The Biden administration is in full retreat over its unlawful vaccine mandate. After wreaking havoc on the U.S. economy for months by mandating federal contractors and businesses with more than 100 employees force employees to get ‘vaccinated’ for Covid-19, the White House is conceding it needs to suspend the authoritarian policy.

The Occupational Safety and Health Administration announced that it was suspending the federal vaccine mandate’s enforcement:

On Nov. 16, 2021, the federal Occupational Safety and Health Administration (OSHA) announced it is suspending all implementation and enforcement efforts related to the Emergency Temporary Standard (ETS) on mandatory COVID-19 vaccination and testing in the workplace. The announcement follows the Nov. 12, 2021 order from the Fifth Circuit Court of Appeals staying enforcement of the ETS pending a final ruling on its legality. OSHA intends to resume implementation and enforcement of the ETS following litigation, if permitted. This newly stated position immediately impacts employers with 100 or more employees who are not federal contractors or otherwise subject to Centers for Medicare and Medicaid Services’ guidance. Such employers can breathe easier, as they are no longer faced with Dec. 5, 2021 and Jan. 4, 2022 compliance deadlines associated with implementing a vaccine mandate or weekly testing program.

The Republican Party’s official account pointed to an “onslaught of legal challenges” for the reason OSHA is backing off enforcing the policy.

BREAKING: Facing an onslaught of legal challenges, including from the @GOP, the Biden administration is suspending implementation of the vaccine mandate.

It was a bad sign for the ‘mandate’ when it was finally issued by OSHA a month and a half after the White House announced it in September. OSHA subsequently issued an Emergency Temporary Standard (ETS) that the federal courts have ripped to pieces as being entirely ungrounded in the law.

“In the order, the Fifth Circuit accuses the current administration of shoe-horning the desire for a federal vaccine mandate into the best, but ill-fitting, vehicle the administration could find – an OSHA ETS,” the National Law Review notes. “The court points out that OSHA’s authority to establish emergency temporary standards is ‘an extraordinary power that is to be delicately exercised’ and criticizes the ETS vaccine rule as ‘a one-size-fits-all sledgehammer that makes hardly any attempt to account for differences in workplaces’.”

“The Fifth Circuit questions whether OSHA has adequately shown a ‘grave danger’ warranting the issuance of an ETS and states that it is ‘dubious’ as to whether the rule will pass ‘constitutional muster’,” the legal analysts note.

The appeals court’s language is strikingly adamant that the “mandate” does not even come close to passing constitutional muster.

“If the deficiencies we’ve already covered aren’t enough, other miscellaneous considerations seal the Mandate’s fate. For one, ‘[t]he Agency cannot use its ETS powers as a stop-gap measure,’ but concedes that that is precisely what the Mandate is intended to do here,” the ruling added.

Furthermore, it should be added in addition to the court’s explicit reasoning, the delayed timeline from OSHA itself throws into serious question whether or not the mandate is grounded in the ’emergency powers’ of the executive branch. The United States is nearly two years into the Covid pandemic, and indeed, over 160 million Americans have had Covid-19 and survived it with natural immunity, according to the CDC’s calculations. There is also the issue that OSHA is waiting until ‘after the holidays’ to enforce the mandate, which underscores that the agency is not addressing a true ’emergency.’

Whether or not the federal appeals court gets the last word remains to be seen. However, the judges convincingly put the nail in the coffin for Biden’s federal vaccine mandate in terms of its unconstitutionality.

“It lastly bears noting that the Mandate raises serious constitutional concerns that either make it more likely that the petitioners will succeed on the merits, or at least counsel against adopting OSHA’s broad reading of § 655(c) as a matter of statutory interpretation,” the court said.

“First, the Mandate likely exceeds the federal government’s authority under the Commerce Clause because it regulates noneconomic inactivity that falls squarely within the States’ police power,” the ruling states. “A person’s choice to remain unvaccinated and forgo regular testing is noneconomic inactivity.” [The court the cited NFIB v. Sebelius (2012) with Chief Justice John Roberts concurring.]

“And to mandate that a person receive a vaccine or undergo testing falls squarely within the States’ police power,” the court continued, adding that precedent had long “settled that it is within the police power of a state to provide for compulsory vaccination.” [Jacobson v. Massachusetts (1905).] “The Mandate, however, commandeers U.S. employers to compel millions of employees to receive a COVID-19 vaccine or bear the burden of weekly testing. The Commerce Clause power may be expansive, but it does not grant Congress the power to regulate noneconomic inactivity traditionally within the States’ police power.”

“Second, concerns over separation of powers principles cast doubt over the Mandate’s assertion of virtually unlimited power to control individual conduct under the guise of a workplace regulation,” the ruling continued. “As Judge Duncan points out, the major questions doctrine confirms that the Mandate exceeds the bounds of OSHA’s statutory authority.”

“Accordingly, the petitioners’ challenges to the Mandate show a great likelihood of success on the merits, and this fact weighs critically in favor of a stay,” the court decided. The judges ruled that the failure to grant the stay would cause irreparable harm to the petitioners, as well as affected companies and employees. It adds that the emergency stay is “in the public interest.”

“The public interest is also served by maintaining our constitutional structure and maintaining the liberty of individuals to make intensely personal decisions according to their own convictions—even, or perhaps particularly, when those decisions frustrate government officials,” the court held.

Ultimately, the Court rebuked the mandate because such powers fall within the Legislative Branch, and not the Executive Branch.

“The Constitution vests a limited legislative power in Congress,” the court stated. “For more than a century, Congress has routinely used this power to delegate policymaking specifics and technical details to executive agencies charged with effectuating policy principles Congress lays down.”

The lawsuit in the Fifth District Court of Appeals, based in New Orleans, is just one of many being brought against the federal vaccine mandate. There are at least thirteen states lining up to formally sue the Biden administration over its illegal decree: Alabama, Arizona, Georgia, Idaho, Indiana, Louisiana, Mississippi, Montana, Oklahoma, South Carolina, Utah, Texas and West Virginia.