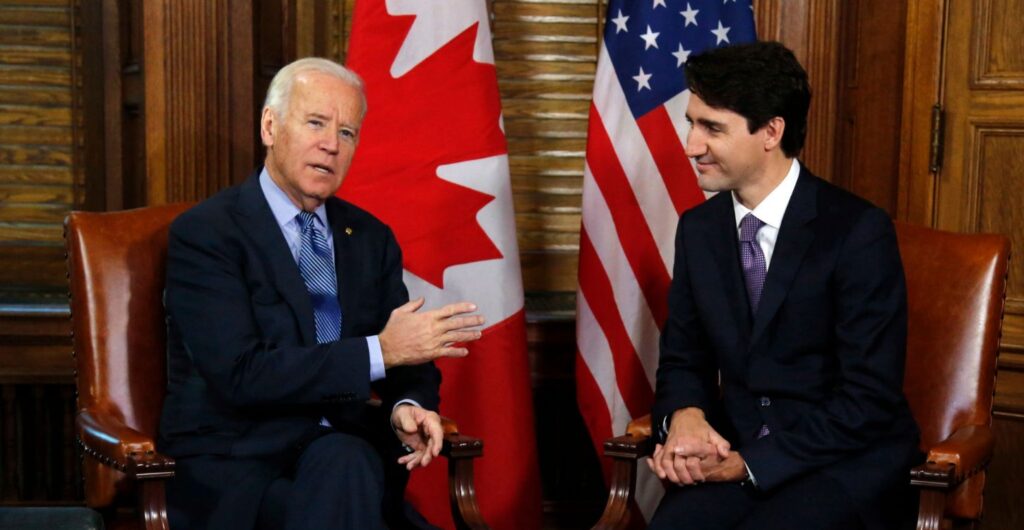 On Friday, the head of state for Canada, Prime Minister Justin Trudea, and the President of the United States, Joe Biden, held an emergency call on the Freedom Convoy protest.

The Freedom Truckers had effectively carried out a trade embargo that has blocked the major thoroughfares between the U.S. and Canada. Through traffic on the Ambassador Bridge, one of the most important bridges in North America, had been brought to a standstill.

The economic pressure being brought to bear has led to several Canadian provinces toppling to the demands of the protesters. Alberta and Saskatchewan announced an imminent end to vaccine mandates. On Friday, the Ontario Premier, Doug Ford, simultaneously announced massive fines of up to $100,000 and potential imprisonment for up to a year for Freedom Convoy protesters, while conceding a pathway to ending the vaccine passports.

Biden and Trudeau held the emergency call on Friday amid such escalating economic and social pressure stemming from widespread civil disobedience to the vaccine mandates. White House Press Secretary Jen Psaki announced the contents of the call at a press conference.

“The two leaders agreed that the actions of the individuals who are obstructing travel and commerce between our two countries are having significant direct impacts on citizens’ lives and livelihoods,” Psaki said.

“The President expressed his concern that United States companies and workers are experiencing serious effects, including slowdowns in production, shortened work hours, and plant closures,” Psaki said about the call.

“The prime minister promised quick action in enforcing the law and the president thanked him for the steps he and other Canadian authorities are taking to restore the open passage of bridges to the United States,” she added.

Justin Trudeau shared the contents of the call in an update on Friday afternoon.

Today, @POTUS Biden and I spoke about the illegal blockades at the border – I updated him on the situation, and we discussed the American and global influence on the protests. We agreed that, for the security of people and our economies, these blockades cannot continue.

“Today, @POTUS Biden and I spoke about the illegal blockades at the border – I updated him on the situation, and we discussed the American and global influence on the protests,” he said. “We agreed that, for the security of people and our economies, these blockades cannot continue.”

The White House on Thursday called on the Trudeau government to use its federal powers to “end the truck blockade by Canadians protesting the country’s COVID-19 restrictions,” the AP reported.

Homeland Security Secretary Alejandro Mayorkas and Transportation Secretary Pete Buttigieg discussed the situation with Canadian officials. They urged their Canadian counterparts “to use Federal powers to resolve this situation at our joint border,” the report noted.

The protests have even forced automobile factories to scale back production, as Michigan Governor Gretchen Whitmer is  offering to intervene to end the trucker-led embargo. She issued the following statement on the standoff.

“My message is simple: Reopen traffic on the bridge,” she said.

“It is imperative that Canadian local, provincial, and national governments de-escalate this economic blockade,” she added. “They must take all necessary and appropriate steps to immediately and safely reopen traffic so we can continue growing our economy, supporting good-paying jobs and lowering costs for families.”

TUCKER: There is a report just out, we can’t verify it, but that the Governor of Michigan…has offered Canadian authorities the use of heavy equipment to move trucks off the Ambassador Bridge…

Tucker Carlson on his show Thursday reported back-channel talk that the Whitmer regime may be offering the Canadian authorities heavy equipment to forcibly remove tractor trailers.

Trudeau on Friday insisted that such an economic blockade was illegal and that the full powers of the Canadian government could be brought to bear to end it.

“If you’ve joined the protest because you’re tired of COVID, you now need to understand you are breaking laws,” he said, adding that “the consequences are becoming more and more severe.”

“The border cannot and will not remain closed,” Trudeau continued. “Everything is on the table, because this unlawful activity has to end and it will end.”

When asked if that entailed military action, he said, “we are a long way from ever having to call in the military,” but added that “of course, we have to be ready for any eventuality.”

The United States and Canada used to be free nations, but under the failed leadership of Biden and Trudeau, respectively, they are collapsing into civil discontent and economic chaos. It’s almost like everything is going according to a plan.