Biden ‘Bumps Elbows’ at G-7, But Watch Him Just Before Summit When He Thought No One Was Watching 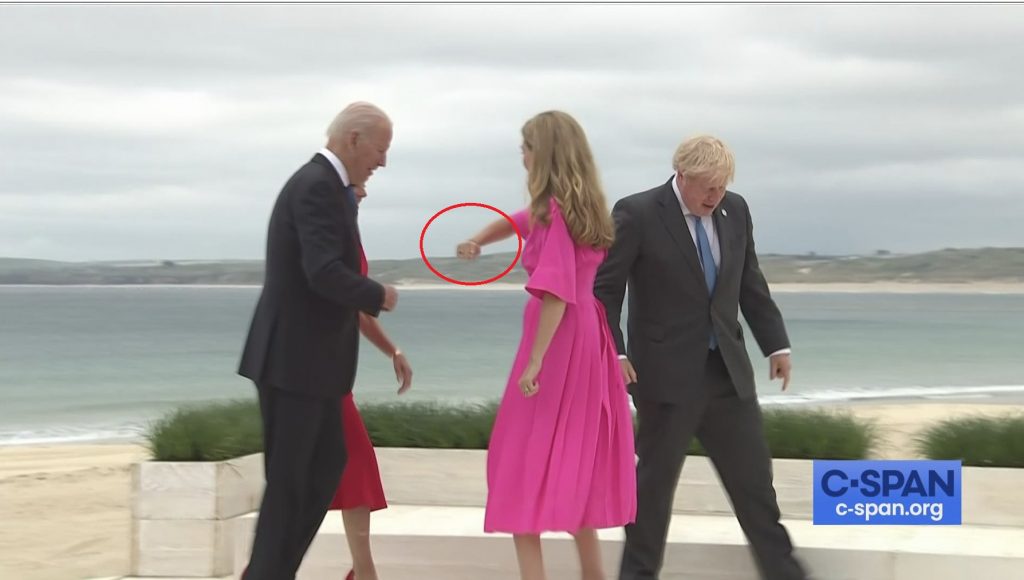 Joe Biden, acting as the President of the United States, represented the nation on his first foreign visit to the G7 summit. As he met with world leaders, Joe Biden and his wife “Doctor” Jill Biden bumped elbows and fists with their foreign counterparts.

This is extremely awkward.

Video from the event had people wondering if Boris Johnson had intentionally snubbed Biden’s “elbow bump.”

But nope, they did it.

The “elbow bump” picked up in earnest in early 2020 after Dr. Anthony Fauci, now under fire for misleading the public on numerous occasions, pronounced that there would be no more handshakes. Ever.

“The other one is you don’t ever shake anybody’s hands,” Fauci said. “That’s clear.”

Thankfully. But even as G7 leaders show the world that public messaging is really the only reason that they are in power, because it surely isn’t producing results that benefit the masses,  Biden showed that behind-the-scenes these rules are really just “COVID theater.”

As Biden made his way to the G7 summit, he violated about sixteen COVID rules in about a minute-and-a-half. Watch:

Despite Joe Biden and Jill Biden being fully vaccinated, Biden shows that he was wearing a mask aboard Air Force One by tearing it off as he steps outside.

Then, he proceeds to walk down the stairs without a hitch and violate social distancing with two military officers. Biden then (gasp) shakes hands.

This isn’t the first time that Biden has shown embarassing optics, which are meant to maintain a state of fear in the American public. On a conference call with world leaders in April, Biden became an international laughingstock by being the only world leader to wear a mask.

Speaker Pelosi has also proved the Democrats to be frauds when she fined GOP House members for not wearing a mask while she attended events without a mask, hugged and shook people’s hands.

This would normally be considered disgraceful behavior. But lapdog journalists refuse to hold elected officials to the same standards as ordinary American citizens. That is, if they also happen to be Democrats like them.