Biden Continues to Say He is ‘Working Like Hell,’ But This is What He is *Actually* Doing This Weekend 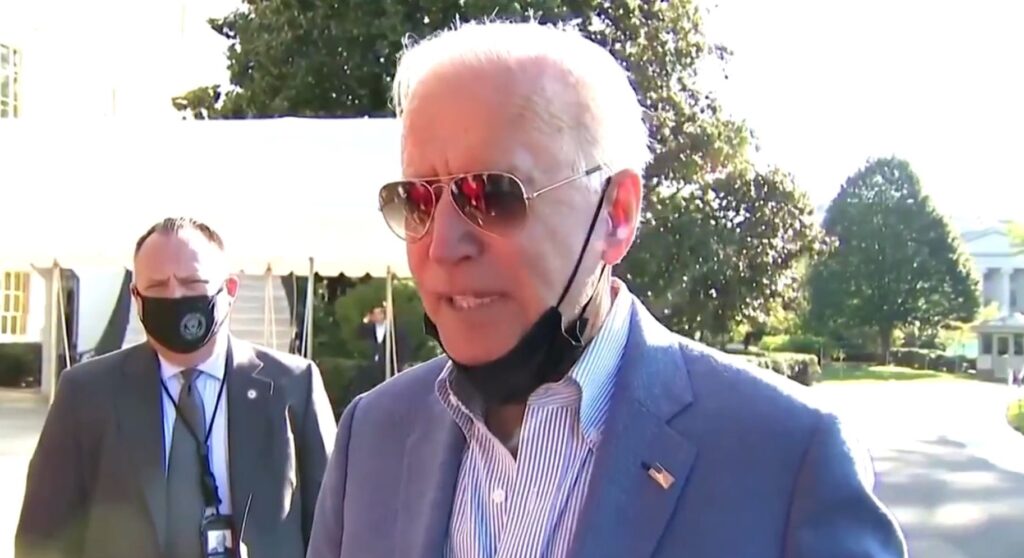 President Joe Biden continues to send Americans the message he is ‘working like hell’ to get things done amidst a daunting set of national crises, when in reality he has taken off on vacation to Delaware for the 21st time under his presidency.

President Joe Biden said he was going to ‘work like hell’ to get an infrastructure bill and a multi-trillion-dollar social-spending bill through Congress and that he plans to travel more to garner support https://t.co/9iQYHQHlU7 pic.twitter.com/weFHhXq0xP

The president told the press that was going to ‘work like hell’ on an infrastructure bill and the $3.5 trillion dollar spending bill on Friday. However, he returned to Delaware again on Saturday.

“Biden visited House Democrats on Friday afternoon, but he left after an hour of meetings with no certainty that his agenda could get a vote before the weekend,” Breitbart News reported.

However, it is clear that Senator Joe Manchin will not go along with a spending bill that costs more than $1.5 trillion-$2 trillion maximum. Thus, President Biden and Speaker Nancy Pelosi appear to have temporarily conceded defeat.

On Saturday, nevertheless, Biden’s social media account boasted that he had been working hard to get his legislative agenda passed through the House and Senate.

I’ve been working around the clock to pass my Build Back Better Agenda and the Bipartisan Infrastructure Deal. It’s the platform I was elected on – and I intend to deliver it for the American people. pic.twitter.com/oTbQfaEzCY

“I’ve been working around the clock to pass my Build Back Better Agenda and the Bipartisan Infrastructure Deal,” Biden claimed. “It’s the platform I was elected on – and I intend to deliver it for the American people.”

However, this does not appear to be the case for the 78-year-old president. Earlier this week, Biden canceled a trip to Chicago one day after purportedly getting his ‘booster shot.’ The White House provided a familiar excuse for the trip cancellation.

“In meetings and calls over the weekend and through today, President Biden has been engaging with members of Congress on the path forward for the Build Back Better Act and the Bipartisan Infrastructure Deal,” a White House official claimed. “He will now remain at the White House tomorrow to continue working on advancing these two pieces of legislation to create jobs, grow the economy and make investments in families, rather than failed giveaways to the rich and big corporations.”

Despite the White House’s claims to the contrary, party insiders say the president has been almost completely disengaged with Capitol Hill proceedings.

“The president needs to pick up the phone and call people,” Politico reported on Monday, citing a ‘moderate source close to the talks.’ The person said the White House has been in “listening mode” for too long and needed to ‘bang heads’ to get the bills across the finish line.

“I don’t understand why the president isn’t whipping his own historic bill,” another moderate House Democrat said.

On Wednesday, Biden again seemed to be ‘working like hell’ when made an appearance at the Congressional baseball game at the Washington Nationals’ stadium. At the game, he was soundly booed. Watch:

Biden also hugged a maskless Nancy Pelosi. She did not appear to be enjoying herself at the game.

Earlier in the day, Pelosi had exploded on a reporter about the budget standoff.

Pelosi snaps at a reporter questioning her strategy on the debt ceiling: “What are you talking about?!” pic.twitter.com/1vsgvDkGjS

“What are you talking about?!” she snapped.

President Biden, however, appeared to have a grand old time at the game.

And he also handed out ice cream bars to members of Congress.

Biden is handing out ice cream bars to ballplayers from both congressional teams. Dove bars with a presidential seal. pic.twitter.com/i3E4ikTxyl

No wonder “F Joe Biden’ chants are breaking out nationwide, including at sports venues.

After a tough week of canceled trips, early lids, press briefings without questions, taking defeats on Capitol Hill, and handing out ice cream at baseball games, Biden is once again on ‘vacation.’

The White House was asked in September why Biden is going to Delaware so often and why he refuses to disclose whom he is meeting with.

“I can confirm we are not going to be providing information about the comings and goings of the president’s grandchildren or people visiting him in Delaware,” Psaki said at her daily press briefing.

There is a better explanation for Biden’s twenty-one Delaware getaways than the excuse that he is ‘hard at work’: It is where he can meet the presidential ‘advisers’ who are actually ‘working like hell’ to transform America into a socialist country.