The Department of Justice has turned over documents on its voter outreach activities ahead of the midterm elections that have been heavily redacted. Thus is the concerning revelation from a Foundation for Government Accountability lawsuit against the DOJ.

“In April, FGA filed a lawsuit against the Department of Justice (DOJ) in federal court after several federal executive agencies failed to respond to our Freedom of Information Act (FOIA) requests to obtain documents pertaining to President Biden’s Executive Order (EO) 14019. FGA originally requested these documents on July 30, 2021 and over a year later, not a single document was provided as required under the FOIA law,” FGA said in a press announcement.

“But on July 12, 2022, the Federal District Court ordered the U.S. Department of Justice (DOJ) to provide us with all requested documents required under the Freedom of Information Act (FOIA) before the midterm election(s),” the FGA added.

However, those documents, relating to a Biden executive order to expand voter outreach activities, have come back heavily redacted, as The Federalist reported on Monday.

“On Sept. 8, the Foundation for Government Accountability (FGA) was scheduled to receive a series of government records from the DOJ that detailed how the agency is complying with Executive Order 14019,” he added. “That order mandated all federal departments to ‘consider ways to expand citizens’ opportunities to register to vote and to obtain information about, and participate in, the electoral process.’Among these included the DOJ’s 15-page ‘strategic plan’ on how the agency intends to comply with Biden’s executive order.”

“Instead of releasing the documents FGA requested pursuant to federal open records laws, however, the Biden DOJ released only a few records pertaining to the order, most of which were heavily redacted,’ Fleetwood added.

In one of the redacted emails, Special Assistant to the Deputy White House Counsels Devontae Freeland wrote to a redacted list of Biden officials about interim reporting on the executive order.

“Thank you for your work on the Promoting Access to Voting EO implementation plans,” Freeland wrote. “The interim reports, which are due this Tuesday 6/15, can be submitted by email [redacted] as a Word doc. Don’t hesitate to reach out if you have questions or concerns.” 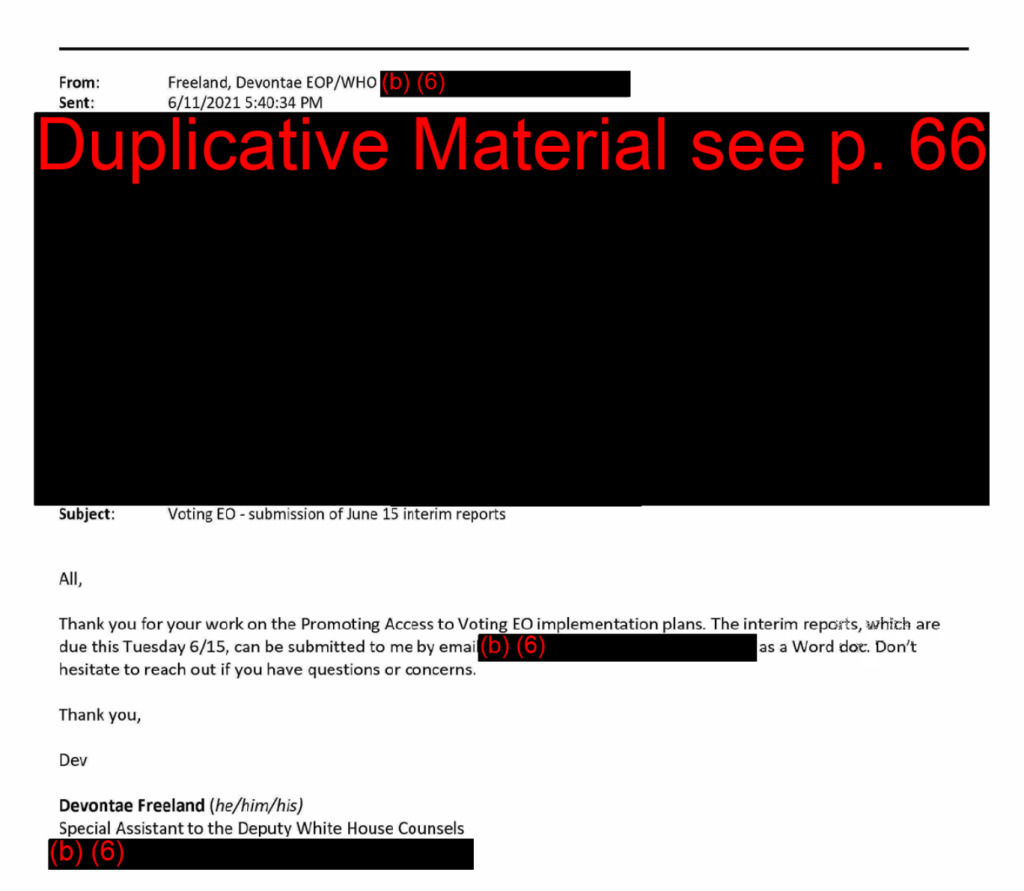 The Biden executive order was broad in scope about the activities the administration would be undertaking:

“Among the missing documents was the DOJ’s 15-page strategic plan that detailed how the agency will help increase voter registration and participation,” the FGA noted on Sunday. “This document is a finished product, completed as part of Biden’s Executive Order. In July, a Federal District Court ruled the DOJ must turn over the documents to the FGA, and this post-decisional document clearly is required to be disclosed.”

“The American people deserve to know if the Biden Administration’s unprecedented action is fair and non-partisan, or if it is designed to help one political party over the other,” said Tarren Bragdon, FGA President and CEO. “Why are they ignoring public record requests for strategic plans on federal voter registration efforts? Why are they treating these documents like they are classified information dealing with nuclear weapons? Midterms are approaching, and the DOJ’s failure to disclose information raises troubling issues. They need to reveal these public documents to keep our elections fair.”