Joe Biden doubled down on his bizarre comments about ‘sucking the blood’ out of children while trying to deflect from the Democrats’ undeniable record of supporting ‘Defund the Police.’

Now that the obviously ridiculous position has backfired for the Democrats, Biden has a convenient scapegoat: Q Anon.

In any event, Biden unleashed a bizarre outburst about Republicans who purportedly believe the Democrats are literally ‘bloodsuckers.’

“We are not defunding the police and have not,” Biden claimed.

“Are there people in the Democratic Party who want to defund the police?” a reporter asked.

“Are there people in the Republican Party who think we’re sucking the blood out of kids?” he retorted.

“I’m not sure,” the reporter replied while she repeated her question as Biden walked away.

This isn’t the first time Biden has gone off on this tangent. At the CNN town hall on Wednesday, Biden also brought it up out of the blue.

“I don’t care if you think I’m Satan reincarnated,” Biden said with a crazy look in his eyes. “The fact is, you can’t look at that television and say, ‘nothing happened on the 6th’.”

Obviously, this is a strawman argument. No one is arguing ‘nothing’ happened on the 6th. But there are people who are rightly pointing out that the protesters and various far-right extremists at the capitol that day have not been charged with killing anyone, nor have they been charged with “insurrection.” This contradicts the mainstream media narrative that January 6th was an imminent threat to democracy.

“You can’t listen to people who say this was a ‘peaceful march’,” Biden reiterated, although it is unclear whom he was arguing with.

“No, I’m serious, think about it,” Biden said with an angry expression. “I’ve been through the other end of this when the Democrats 35 years ago were way off to the other side. Many times, Republicans in the right place. I don’t mean that it’s only the Democratic point-of-view.”

“But some of the stuff — I mean, Q Anon,” Biden continued. “The idea that the Democrats or the Biden is hiding people and sucking the blood of children. No, I’m serious!”

Just look at the expressions of people in the audience when Biden brought this up. 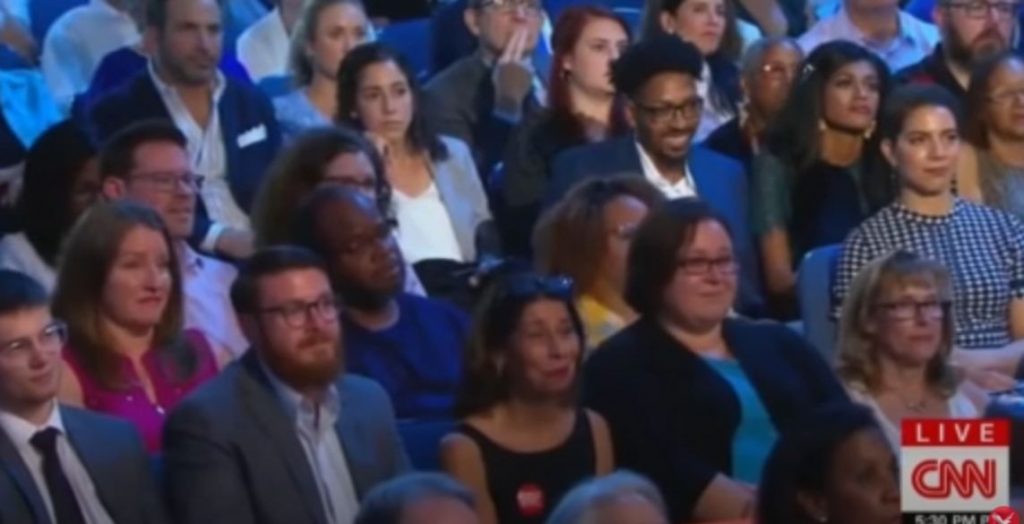 Their facial expressions really say it all.