The White House is persisting in its lie that skyrocketing inflation in the United States is due to Putin’s war against Ukraine. But on Sunday, CBS News’ “Face the Nation” completely debunked the Biden administration’s inflation lies. Watch:

“So a number of economists,” Margaret Brennan began. “I want to put up chart of inflation here for our audience to see measured by the consumer price index. So from the beginning of the pandemic through now, and as you can see, the tick up began good year before the war Ukraine began, a number of economists, including at the San Francisco Fed, have said that the tremendous fiscal spending that went underway the 6 trillion in two years, did add to that.” 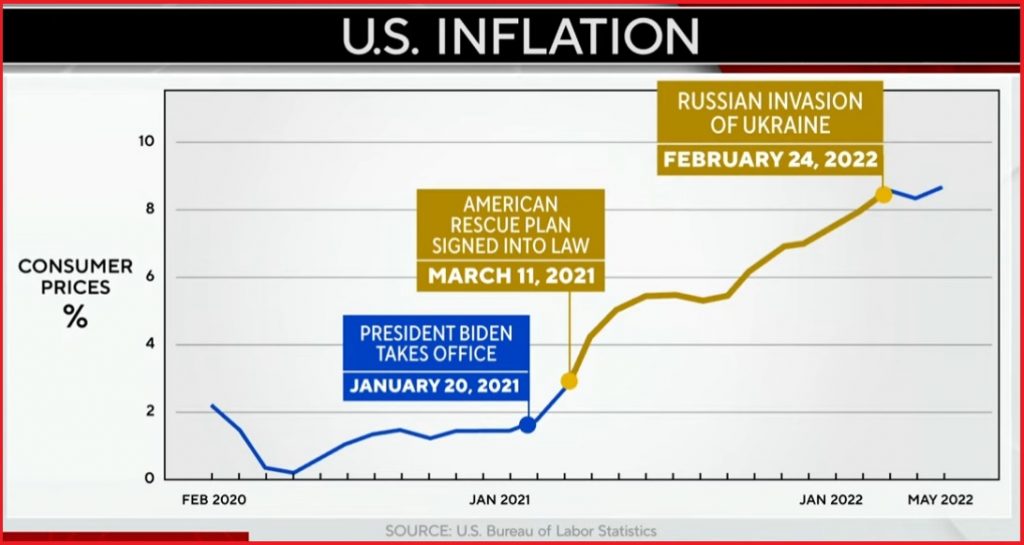 “Including, as you can see right on there, the 2 trillion that the Biden administration pushed through in the Spring of 2021,” CBS’s report went on. “So when people look at that and they say, ‘well, the White House told us that inflation would be transitory, the White House told us we could go through with this kind of spending, we’d be fine.’ Even when Democrats within your own party were warning, this would add to inflation, how do you win credibility here to the public? And say, this time we are not wrong.”

“Well, you just have to look around the world today to recognize that the two principle drivers of inflation are the pandemic and Putin,” Deese said. “We’re seeing this everywhere. It is a global phenomenon. As I mentioned in the UK, inflations hit 9%, right?”

“Why is the president saying that inflation is worse everywhere, but here?” Doocy asked.

“Because what we have seen across the globe, first of all, inflation is a global challenge, as we have said,” KJP replied. “It is, it is, it is, it is caused by clearly the pandemic, this once in a generation pandemic that we are coming out of, and also most recently, the war, that, that Putin started in Ukraine that has caused inflation, as we look at food and as we look at gas prices.”

“He says… inflation is worse everywhere but here,” Doocy pointed out. “That’s not true. U.S. has worse inflation than Germany, France, Japan, Canada, India, Italy, Saudi Arabia…Why is he saying that?”

“Well, I think what we are saying is that when you talk about inflation, it is a global thing,” she doubled down. “And it is not just about the United States. This is something that everyone is feeling, because of coming out of a once-in-a-lifetime pandemic. Because of the war that Russia has started in Ukraine.”

Yet the record shows that not only did almost all of the inflation occur prior to Putin launching his invasion of Ukraine, but the Biden administration has lied repeatedly about inflation. Watch this devastating montage from RNC Research:

It’s clear that the Biden administration is trying to cover its tracks after fueling inflation with its reckless spending. The question Americans need to ask themselves is: Why?

Is the rampant inflation an intentional aspect of the Democrats attempting to transform the economy into one that is centrally planned by corrupt Washington politicians? After all, Biden recently all-but-admitted that the soaring gas prices are part of the administration’s green energy push that is accompanying its disastrous energy policies. It’s worth thinking about.