Biden Has Bizarre Reaction to New Poll Most Americans Don’t Believe He is ‘Competent, Focused or Effective’

Joe Biden displayed an odd reaction to a poll showing the military withdrawal of Afghanistan has gone so badly that most think he’s not up to the job of being president. He laughed.

“A new poll out today shows Americans wanted to withdraw from Afghanistan, but they disapprove of the way you’ve handled it,” CBS reporter Ed O’Keefe said. “The majority of Americans – forgive me, I’m just the messenger – no longer consider you to be competent, focused, or effective at the job. What would you say to those Americans?”

The CBS/YouGov poll O’Keefe referred to at the press conference shows that most Americans did want the U.S. military to ultimately withdraw from Afghanistan after nearly two decades of war. But they also blame President Biden for the disastrous execution of the plan.

“Most Americans have wanted to withdraw from Afghanistan for a while, and most still do,” CBS reported. “But not like this.” 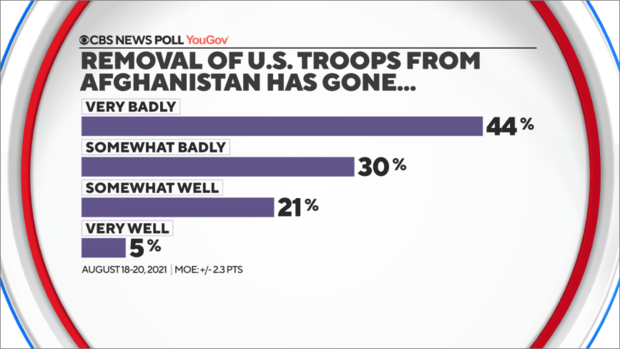 “Public reaction to what’s happened there is decidedly negative, with Americans now fearing wider repercussions from a heightened threat of terrorism,” the report noted. “Back home, the public weighs in with rough judgments on President Biden — not only for his handling of it, but with his overall presidential approval rating dropping substantially, and broader views of his qualities like effectiveness and competence taking hits along with it.”

The president is not the only one who seems to think the debacle is amusing. Vice President Kamala Harris, prior to setting off for a southeast Asian tour that includes Singapore and Vietnam, also had a case of the giggles.

As she approached the press, the Vice President’s laughed effusively before addressing the dire situation in Afghanistan.

“What are your reports on Americans…?” a reporter shouted over the engine noise.

“Hold on, hold on,” Kamala Harris brushed her off with a cocksure smile. “Hold on everybody,” she said and laughed.

“I want to talk about two things,” she said. “First, Afghanistan.”

The vice president cheerfully laughing before talking about Afghanistan being one of its ‘highest priorities’ on the way to tour southeast Asia, including Singapore and Vietnam, belies that the Biden administration doesn’t grasp how deadly serious the matter is for millions of Americans.

Americans are still in harm’s way in Afghanistan. The State Department issued a warning on Saturday to Americans to stay away from Kabul airport unless directed by U.S. authorities. There are intelligence reports of ISIS terrorists targeting Americans, and even that the Taliban has beaten Americans who are trying to escape the wartorn country.

If evacuating Americans and Afghan allies were the Biden administration’s “highest priority,” it would have evacuated them ahead of U.S. military troops in Afghanistan. Now, there are thousands of Americans scrambling to get out and are still at risk of being killed by the Taliban and the terrorist groups al Qaeda and ISIS. It’s definitely not a laughing matter.