President Biden hosted a global supply chain summit at the sidelines of the G20 in Rome, and predictably, it turned into a ‘train wreck.’ While discussing the serious supply chain disruption that Biden and his cohorts have created with their unnecessary and fascistic policies, he uttered a phrase that is notorious in history for being used about fascists themselves. Italian fascists, coincidentally.

“Together, to increase our resilience and enhance our shared prosperity,” Biden said. “Now, I’m going to turn it over to Secretary Blinken to actually, uh, make the trains run on time.”

Italians would instantly be familiar with the phrase “making the trains run on time,” because it was a phrase infamously used in reference to the regime of fascist dictator Benito Mussolini. The Daily Kos warned politicians like Bernie Sanders to never say the phrase in a 2020 article, citing Global Security:

It is said that the claim was largely propaganda to counteract critics of the regime. Montagu and Darling wrote: “Mussolini may have done many brutal and tyrannical things; he may have destroyed human freedom in Italy; he may have murdered and tortured citizens whose only crime was to oppose Mussolini; but ‘one had to admit’ one thing about the Dictator: he ‘made the trains run on time.'”

Contemporaneous praise for Mussolini making the trains run on time is surprisingly scarce. The New York Times makes only a single contemporaneous mention of the trains running on time. The noted theologian Reinhold Niebuhr was quoted in the New York Times… on December 14, 1931 “Regardless of the compliments tourists give him for running the trains on time, the rule of Mussolini is the greatest outrage carried on against liberty”…

Italians would go on to murder the fascist dictator Mussolini in the streets. The expression of Secretary of State Tony Blinken and other world leaders upon Biden saying the phrase is priceless: 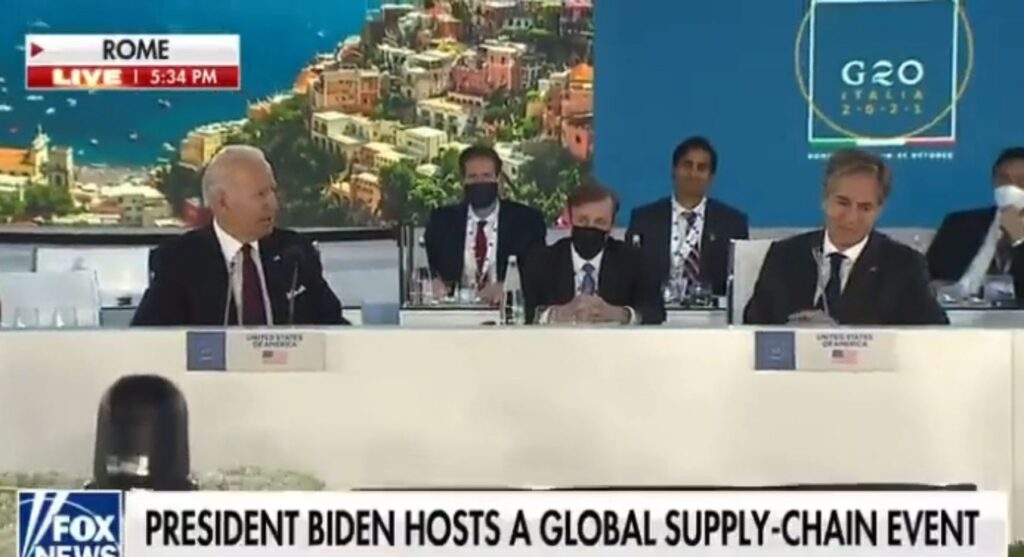 It truly is that embarrassing. The entire awkward event can be watched below: