Biden Takes One Question from Hand-Picked Reporter — Suggests He Had a ‘Meeting’ with Leader of U.S.

President Biden and the Singaporean Prime Minister Lee Hsien Loong made a joint statement at the White House on Tuesday. Biden also agreed to take only a single question from a hand-picked reporter. Watch:

“Now, we each agreed we take one question,” Biden said. “And, I’ll recognize someone first, Darlene Superville, Associated Press.”

Biden’s agreement with the press to ‘take one question’ comes amid major international developments, particularly, Russian and Ukrainian overtures towards potentially coming to a peace agreement.

The president nonetheless seemed unprepared to discuss these matters at length with the American people, and recapped that he had recent talks with foreign leaders on the issue.

“What is your view of Russia’s announcement today that it will, quote, ‘fundamentally scale back its military operations near Kyiv and another Northern city in Ukraine?’ Superville asked. “Do you see this as possibly the war beginning to come to an end? Or do you see this as Russia trying to buy time and to recalibrate for a new military effort?”

“We’ll see,” Biden replied. “I don’t read anything into it until I see what their actions are. We’ll see if they follow through on what they’re suggest.”

“There are negotiations that have begun today… or not begun, continue today,” he rambled on. “One in Turkey and others. I had a meeting with the heads of state of, uh, four allies in NATO… France, Germany, uh, the United States [sic] and Great Britain.”

But one of the most humiliating things to come out of his press conference is a glimpse at the handheld notecard his White House handlers gave him to handle “tough” Putin Q&A talking points.

Biden also had a handheld ‘cheat sheet’ so that he could deal with ‘tough’ Putin Q&A talking points. 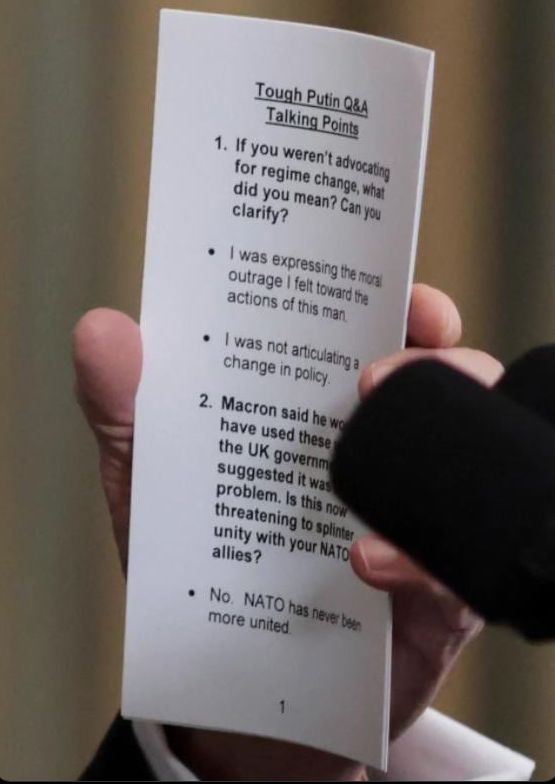 The notecard shows his directions to respond to a carefully couched question that a reporter asks him nearly verbatim. Here are those responses:

This is how that came out at the press conference. Watch:

“Mr. President, I still want to get back to your original words that he cannot remain in power,” a reporter asked. “Can you help us understand, you have more foreign policy experience than any president who has ever held this office, whether those are your personal feelings or your feelings as president? Do you understand why people would believe you, as someone commanding one of the largest nuclear arsenals in the world, saying someone cannot remain in power is a statement of U.S. policy? And also, are you concerned about propaganda use of those remarks by the Russians?”

“No and no,” Biden said flatly.

“Tell me why,” the reporter pressed. “You have so much experience, you are the leader of this country.”

“Because it’s ridiculous,” he insisted. “Nobody believes we’re going to take down — I was talking about taking down Putin. Nobody believes that. Number one.”

“Number two, what have I been talking about since this all began?” Biden asked rhetorically. “The only war that’s worse than the one intended is one that’s unintended. The last thing I want to do is engage in a land war or a nuclear war with Russia. That’s not part of it.”

“I was expressing my outrage at the behavior of this man,” Biden lashed out. “It’s outrageous, it’s outrageous. And it’s more an aspiration than anything, he shouldn’t be in power. There’s not — people like this shouldn’t be ruling countries, but they do. The fact they do, but doesn’t mean I can’t express my outrage about it.”

It’s no wonder the White House wants to protect the President of the United States from answering ‘tough’ questions. And it appears like the U.S. press is willing to go right along with it.