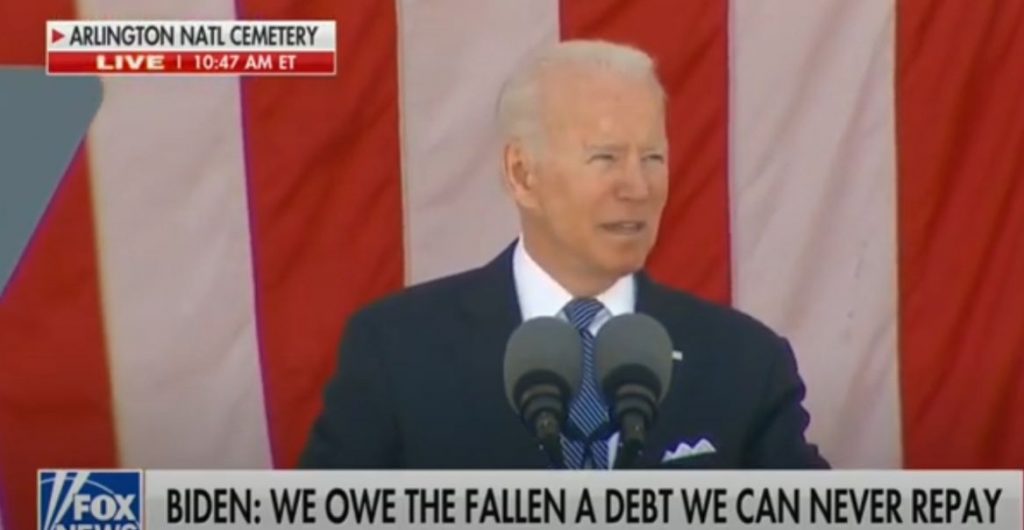 President Biden took advantage of his Memorial Day address intended to mark the ultimate sacrifices made by our nation’s soldiers to perpetuate mistruths about U.S. elections and its system of government.

“The lives of billions from antiquity to our own hour have been shaped by the battle between aspirations of the many and the greed of the few,” he went on. “Between people… right to self-determination and the self-seeking of the dictator. Between dreams of democracy and appetites for autocracy, which you are seeing around the world.”

“Our troops that fought this battle on fields around the world, but also the battle of our time,” he railed on, incoherently. “And the mission falls to each of us, each and every day, democracy itself is in peril. Here at home and around the world. What we do now, what we do now, how we honor the memory of the fallen, will determine whether or not democracy will long endure.”

Biden then went on to address what he referred to as the “struggle for the soul of America.”

“Democracy thrives when the infrastructure of democracy is strong,” Biden said. “When people can vote freely and fairly and conveniently.”

The president here is making up a right on the spot in order to push back against election integrity measures around the country that seek to verify ‘one voter, one vote,’ which is a lynchpin of election systems around the world. There is no right to vote “conveniently,” if that implies that elections should run for weeks on end and voter IDs are somwhow an immense burden to voters.

Democrats seek an open-ended election system that goes on for weeks, if not months; mail-in ballots whether people requested them or not; the ability of activist groups to ‘vote farm’ entire communities; ballots submitted without verification of identification, citizenship or state residency; and other election processes that are considered insecure and open to fraud in “democracies” around the world.

A note about “democracy.” America’s Founders explicitly railed against pure ‘democracy’ as an inherently destabilizing form of government. As the book Liberty in Peril: Democracy and Power in American History by Randall Holcombe put it:

The role of government as [America’s founders] saw it, was to protect the rights of individuals, and the biggest threat to individual liberty was the government itself. So they designed a government with constitutionally limited powers, constrained to carry out only those activities specifically allowed by the Constitution. This book describes how the fundamental principle underlying American government has been transformed from protecting individual liberty to carrying out the will of the people, as revealed by a democratic decision-making process.

The Democratic Party’s entire rhetorical approach is that of a bait-and-switch. It seeks to replace Constitutionally protected freedoms with repressive “democracy,” “free and fair” elections with “free, fair and convenient” elections, and tributes to our troops on Memorial Day with politically motivated speeches intended to entrench the Democratic Party in power for perpetuity.