Biden on Russia Conflict: ‘Defending Freedom Will Have Costs for Us as Well and Here at Home’ 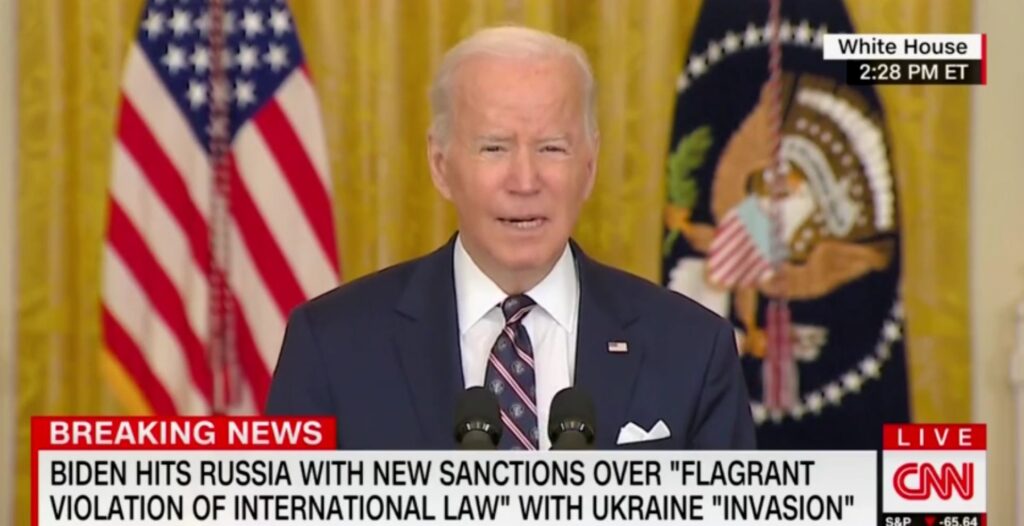 President Joe Biden cares about freedom everywhere else in the world except in America’s backyard. On Tuesday, the president made a series of declarations at a presser that has political observers scratching their heads. Watch:

“As we respond, my administration is using every tool at our disposal to protect American businesses and consumers from rising prices at the pump,” Biden said. “As I said last week, defending freedom will have costs for us as well and here at home.”

“We need to be honest about that,” he went on. “But as we will do — but as we do this, I’m going to take robust action to make sure the pain of our sanctions is targeted at the Russian economy not ours. We’re closely monitoring energy supplies for any disruption. We’re executing a plan in coordination with major oil producing consumers and producers toward a collective investment to secure stability and global energy supplies. This will be — this will blunt gas prices. I want to limit the pain to the American people fueling at the gas pump. This is critical to me.”

Biden’s remarks are similar to Canadian Prime Minister Justin Trudeau, who on Tuesday also stated surreally that his regime was “taking a stand against authoritarianism” — overseas.

Of course, gas prices have escalated under the Biden regime before anyone in his administration had even talked up the threat of a European war. But Biden promised that he wasn’t interested in a war with Russia.

“Today, in response to Russia’s admission that it will not withdraw its forces from Belarus, I have authorized the additional movements of U.S. forces and equipment already stationed in Europe, to strengthen our Baltic allies, Estonia, Latvia and Lithuania,” Biden said. “Let me be clear, these are totally defensive moves on our part. We have no intention of fighting Russia. We want to send an unmistakable message, though, that the United States, together with our allies will defend every inch of NATO territory and abide by the commitments we made to NATO.”

But when discussing the intentions of Russian president Vladimir Putin, Biden said he would “not go into it.”

“Yesterday, the world heard clearly the full extent of Vladimir Putin’s twisted rewrite of history, going back more than a century, as he waxed eloquently, noting that — well, I’m not going to go into it — but nothing in Putin’s lengthy remarks indicate any interest in pursuing real dialogue on European security in the year 2022.”

Biden promptly left the press conference without taking remarks. But ABC’s David Muir interjected a bizarre defense of the president.

“President Biden there in the East Room not taking any questions given the gravity of the moment the world is now facing,” Muir said. “He did talk about Vladimir Putin and his announcement just 24 hours ago that he now recognizes two separatist regions in eastern Ukraine as independent countries.”

The Washington Post recently argued that “freedom” is a value for “white supremacists.” That appears that is no longer the case — so long as Western leaders are talking about freedom someplace else.

After Brutal Crackdown on Freedom Convoy, Justin Trudeau Makes Announcement That is Absolutely Shocking the World