The Biden administration, fresh off signing a $1.9 trillion COVID “relief” bill on Thursday is already eyeing another $4 trillion spending blowout. However, this one is going to come with a hefty tax increase — enough to cover the “blue states bailout” in the relief package.

The massive new spending bill would come with a slew of tax increases that would surely slow the economic recovery and make the United States less competitive globally.

“With each tax break and credit having its own lobbying constituency to back it, tinkering with rates is fraught with political risk,” Bloomberg reported. “That helps explain why the tax hikes in Bill Clinton’s signature 1993 overhaul stand out from the modest modifications done since.”

“For the Biden administration, the planned changes are an opportunity not just to fund key initiatives like infrastructure, climate and expanded help for poorer Americans, but also to address what Democrats argue are inequities in the tax system itself,” the report continued.

If this seems like Obama-style wealth redistribution, that is because it is. The federal government is using the COVID pandemic as an excuse to pass colossal “relief” packages that are filled with pork and handouts for political clientele.

The main beneficiaries of the $1.9 trillion spending blowout? Blue states.

“The biggest winners will be states who locked down the hardest during the pandemic,” the Post reported on the recently passed “relief” bill. “Their ‘Faucian bargain’ has now paid off…”

“The numbers boggle the mind: $195 billion goes to states with no strings attached (except, of course, to ban tax cuts),” the Post reported. “There’s $130 billion for reopening K-12 schools with no requirement they reopen. Another $25 billion for public housing and $20 billion for public transit. All in, America’s states and cities are seeing a direct windfall north of half a trillion dollars.”

Even one Democrat, New York Rep. Adriano Espaillat, said he was “not comfortable” with all the waste in the bill.

The spending proposal also comes as new reportage confirms what critics argued would happen all along: States that “locked down” fared no differently than states that remained relatively open.

“Nearly a year after California Gov. Gavin Newsom ordered the nation’s first statewide shutdown because of the coronavirus, masks remain mandated, indoor dining and other activities are significantly limited, and Disneyland remains closed,” the AP reported on Saturday.

“By contrast, Florida has no statewide restrictions,” the AP continued. “Republican Gov. Ron DeSantis has prohibited municipalities from fining people who refuse to wear masks. And Disney World has been open since July.”

“Despite their differing approaches, California and Florida have experienced almost identical outcomes in COVID-19 case rates,” it added.

New York and New Jersey are the worst in the United States in COVID-related deaths per million, while Florida is currently 27th and California is 30th. Such figures correct for the large population sizes of the states (it should be added the Florida has a large elderly population that is highly at risk from COVID).

Furthermore, new studies released by the CDC show that indoor dining has zero statistically significant correlation with the spread of COVID-19 and that masks were remarkably ineffective at preventing case rate growth and mortality rates.

Jordan Schachtel does a simple but effective breakdown of  January unemployment numbers for the states that locked down versus the states that took a ‘minimalist’ approach on his Substack column. 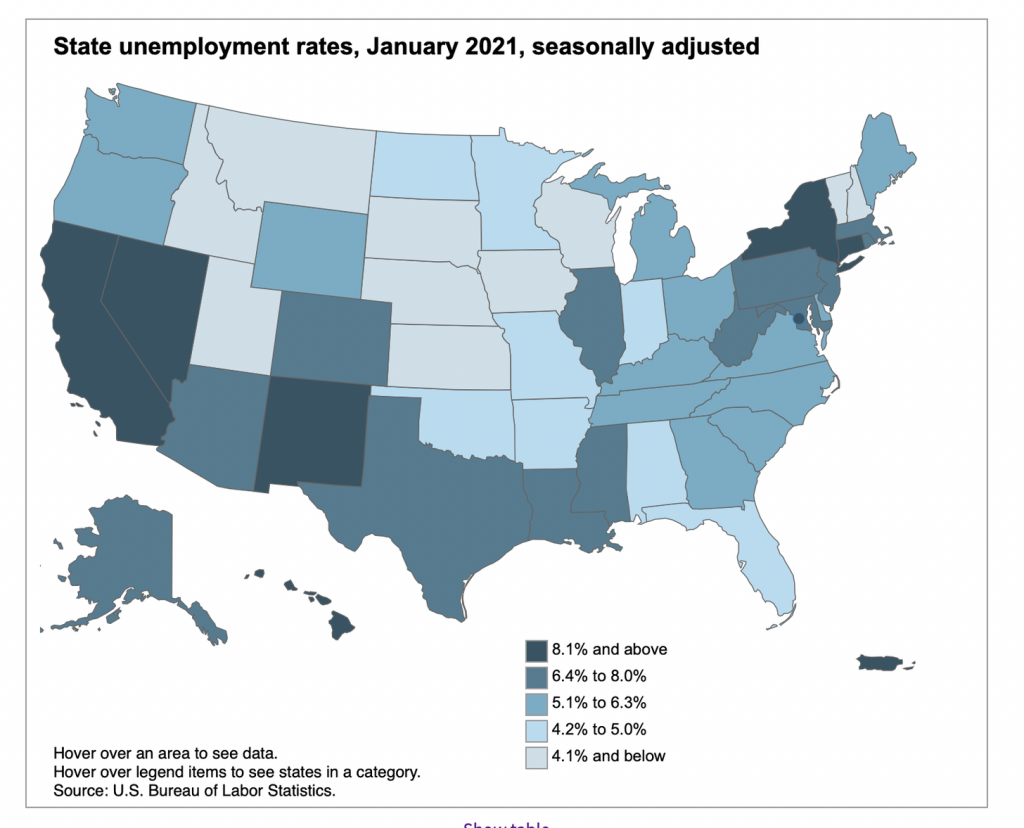 “Of the remaining 9 states with the best unemployment numbers, every state but Vermont took a more minimalist approach to COVID-19 restrictions. On the other side of the spectrum, here’s a list of the states that saw a spike in unemployment of 4 percent or more since January, 2020”:

“All of the aforementioned states instituted major lockdowns that were intended to stop the annual respiratory sickness season from occurring, but failed to do so,” Schachtel points out. “These policies did in fact detonate their respective economies. Moreover, most of these states continue to have major restrictions in place that will keep unemployment moving in the wrong direction.”

American taxpayers will be on the hook for those disastrous policies. And if Biden passes his massive tax hike to go with even more wasteful spending, it will throw the brakes on any chance of a quick recovery.

The new $4 trillion legislation would be in addition to the  recently passed $1.9 trillion relief plan, as well as nearly $4 trillion in stimulus measures passed under former President Donald Trump. That would be nearly $11 trillion in new spending in just one year.