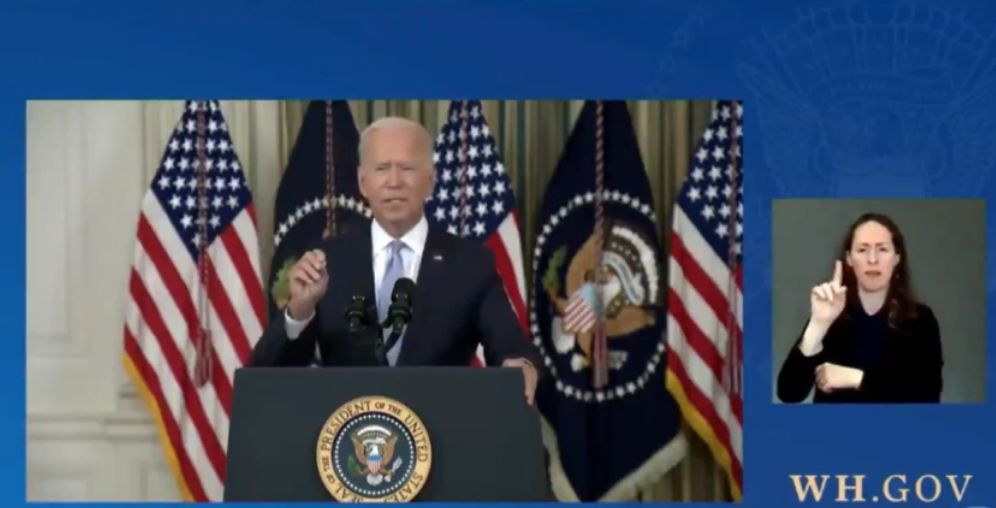 “And this week, as planned, we took a key step to protecting the vaccinated with booster shots,” Biden said. “Which our top government doctors believe provides the highest level of protection available today.”

In other words, the CDC was following orders from the White House and disregarded the scientific advice of its panel with its latest booster shot decision, which will be discussed further below.

“The Food and Drug Administration, the FDA, the Centers for Disease Control and Prevention, the CDC, they’ve completed their independent scientific review,” he continued.

“And based on that review, the majority of Americans who are ‘fully vaccinated’ with the Pfizer vaccine are now able to receive the booster shot six months after they’ve received their second shot,” he added.

“Six months after you’ve received your second shot you are eligible,” he added.

However, this is a far cry from what was actually recommended and it is a gross misrepresentation of the independent panels’ findings, as is the standard operating procedure for the Biden administration.

On Fridayl, CDC Director Rochelle Walensky overruled the guidance provided by her scientific advisers and instead recommended that health workers, teachers and other essential workers actually get the ‘booster shots’ in what even the New York Times is characterizing as an ‘unusual’ ruling.

The director of the Centers for Disease Control and Prevention on Friday overruled a recommendation by an agency advisory panel that had refused to endorse booster shots of the Pfizer-BioNTech Covid vaccine for frontline workers. It was a highly unusual move for the director, Dr. Rochelle Walensky, but aligned C.D.C. policy with the Food and Drug Administration’s endorsements over her own agency’s advisers.

The C.D.C.’s Advisory Committee on Immunization Practices on Thursday recommended the boosters for a wide range of Americans, including tens of millions of older adults and younger people at high risk for the disease. But they excluded health care workers, teachers and others whose jobs put them at risk. That put their recommendations at odds with the F.D.A.’s authorization of booster shots for all adults with a high occupational risk.

The New York Times ven noted that the White House had been ‘getting ahead of the regulatory process,’ which is a euphemistic way of stating that it has been politicizing the entire process.

Dr. Walensky’s decision was a boost for President Biden’s campaign to give a broad segment of Americans access to boosters. The White House had come under criticism for getting ahead of the regulatory process.

The White House could begin promoting and rolling out a plan for booster shots as soon as Friday. That would be in keeping with the administration’s previously announced plan to offer the additional doses this week.

The FDA’s advisers recently delivered the Biden administration a policy defeat and rejected a plan to offer booster shots of the Pfizer-BioNTech Covid vaccine to those ages 16 to 65. The FDA’s Vaccines and Related Biological Products Advisory Committee delivered the Biden proposal a defeat of 16-2. However, the vote was non-binding and a final FDA vote is forthcoming.

“Over several hours of discussion, members of the Food and Drug Administration panel of outside experts voiced frustration that Pfizer had provided little data on safety of extra doses,” the Associated Press reported. “And they complained that data provided by Israeli researchers about their booster campaign might not be suitable for predicting the U.S. experience.”

“It’s unclear that everyone needs to be boosted, other than a subset of the population that clearly would be at high risk for serious disease,”  Michael Kurilla, a committee member with the National Institutes of Health, said.

Dr. Rochelle Walensky’s overruling of the CDC panel would not be the first illustration of the politicized nature of the agency’s decision-making. The CDC in May issued guidance that it was unnecessary for vaccinated Americans to wear masks indoors and outside. But a subsequent flurry of emails show that displeased teacher’s unions — not the “science”  — caused the CDC to back out on its guidance. It would subsequently issue stricter school guidelines that contradicted its previous May 13 guidance.

The CDC’s “government doctors” are clearly doing what is best for the “government” and not so much for the best practice of actual medicine. Americans had better figure this out sooner rather than later.