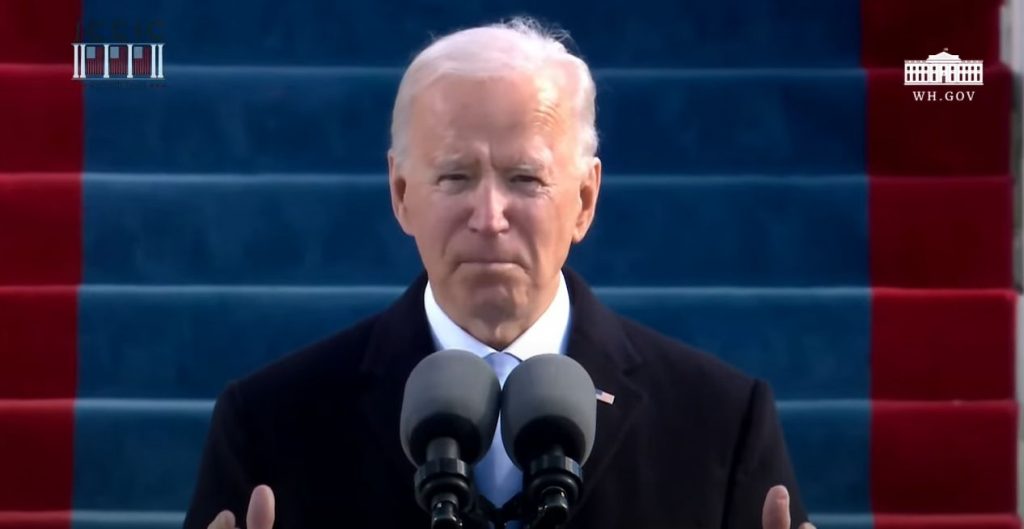 Joe Biden has been sworn in as the 46th President of the United States. The 78-year-old Biden begins his term on January 20th after one of the most heated and highly contested elections in U.S. history.

President Biden delivered an Inauguration Address that attempted to reconcile deep divisions between the new administration and the approximately 74 million Trump supporters who voted against him in the highest-turnout election since 1908.

“Through a crucible for the ages America has been tested anew and America has risen to the challenge,” Biden said. “Today, we celebrate the triumph not of a candidate, but of a cause, the cause of democracy.”

The tone of the newly sworn-in president’s speech decidedly set out to allay concerns about election legitimacy. The recently departed Donald Trump and his supporters have maintained they have serious doubts about election processes in several closely decided swing states.

Joe Biden takes office amidst major challenges, including a lingering COVID-19 pandemic, economic hardship for small business owners, and unresolved issues from the most fractious presidential transition in modern times.

There is also the fallout from a siege at the Capitol on January 6th during the convening of the Electoral College at a Joint Session of Congress.

Controversially, former President Trump gave a speech just prior to a pre-planned raid of the Capitol building, wherein he urged protesters to “peacefully and patriotically make your voices heard.”

Elsewhere, a massive protest outside of the Capitol building had gathered, accompanied by unusually lax and passive security and some Capitol police officers even allowing protesters into the building.

After leading a one-day impeachment with only two hours of debate and no defense for allegedly inciting the mob, Democrats are now seeking to take the unprecedented action of getting a Senate conviction for Donald Trump after leaving office. This measure is constitutionally debatable, since Donald Trump is now a private citizen, and would be carried out with the aim of barring him from holding future office.

Some judicial analysts argue that an impeached former president can be convicted, while others say that this is unconstitutional and the Senate impeachment trial should be dismissed.

The U.S. Senate would need a two-thirds majority to carry the impeachment conviction vote. The Democrats would require 17 Republican Senators to join the Democrats, after the GOP lost the two Senate special elections in Georgia and the party control is tied 50-50 in the Senate.

President Joe Biden’s Inauguration Speech carried the tone of reconciliation, but the optics of a nation’s Capitol occupied by tens of thousands of National Guard troops instead of American citizens, and the looming Senate impeachment trial of a former president and now-private citizen, has provided a clash of narratives that will play itself out during the new administration’s upcoming weeks.