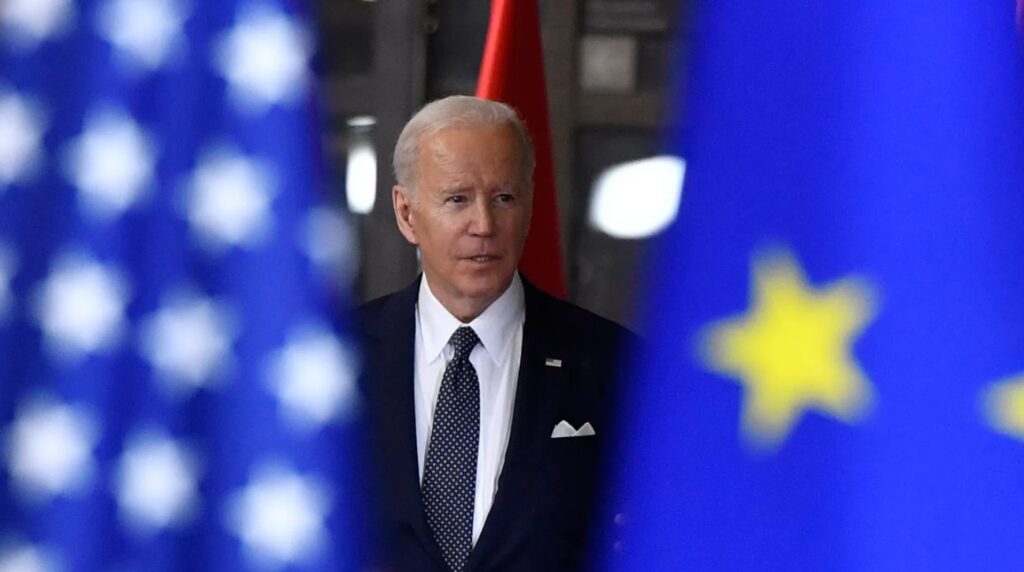 President Biden on his European visit on Thursday expressed that he “dreams” to win re-election in the United States “without opposition.” Watch:

“I came to congratulate a man who just got re-elected without opposition. I dream about that someday,” Biden said to European Council President Charles Michel.

The president apparently was making light of the past election, when he was awarded a series of narrow victories in swing states under unusual conditions, leading to a series of election challenges. The Electoral College vote that certified his presidential victory was interrupted by bomb threats at the DNC and RNC national headquarters and a subsequent riot at the Capitol building staged by far-right extremist groups.

Biden also boasted that “America is back” under his leadership, while claiming his European counterparts believe that he is “up to the job.”

“One of the things I take some solace from, is I don’t think you’ll find any European leader who thinks that I am not up to the job,” Biden said. “And I mean that sincerely. … The point is, the first G-7 meeting I attended like the one I did today was in Great Britain. And I sat down and I said, ‘America is back.’ And one of my counterparts, colleagues, head of state, said, ‘For how long?'”

America suddenly finds itself dealing with a Russian invasion of Eastern Europe precipitated by a combination of weak opposition to Russia’s oil and gas pipeline politics; namely, his administration initially greenlighting the Nordstream 2 pipeline project to Germany. This weakness was exacerbated botched diplomatic signaling, such as the president’s line suggesting he would tolerate a “minor incursion” into Ukraine. The crux of Russia’s antagonism is NATO expansionism into Eastern Europe, which has been a historic buffer zone between Russia and Germany.

At his press conference on Thursday, Biden asked questions from reporters as written down on a notecard that was given to him. When he left the press conference, he admitted that he was an ‘hour late’ for an EU meeting.

“Hey, wait, hold on a second, please,” he went on. “I was supposed to be an hour ago at the European Union meeting and to, to speak now and I’m thanking you. So since I’m going to, haven’t called on before you… Who are you?”

Biden would take the question and then run late to his meeting. Despite the host of problems at home, the president insisted that he always does exactly what he thinks is the “right thing.”

“When I ran this time, and I think the American press, whether they look at me favorably or unfavorably, I made a determination. No election is worth my not doing exactly what I think is the right thing. Not a joke. I’m too long in the tooth to fool with this any longer,” Biden said.

Biden said that his main focus at this point was attempting to maintain Democrat majorities in the House and Senate “so that I have the room to continue to do the things I’ve been able to do in terms of growing the economy and dealing in a rational way with American foreign policy and lead the world.”

Biden also boasted that he would be “fortunate” to face Donald Trump in the next presidential election in 2024.

“I don’t criticize anybody for asking that question,” Biden continued. “But the next election, I’d be very fortunate if I had that same man running against me.”

But obviously, not as fortunate if he was running “without opposition.” A new poll shows Joe Biden would be trailing his hypothetical opponent Donald Trump in a 2024 rematch.

Biden Humiliates America in Europe: President Once Again Whips Out Notes to Call on Reporters