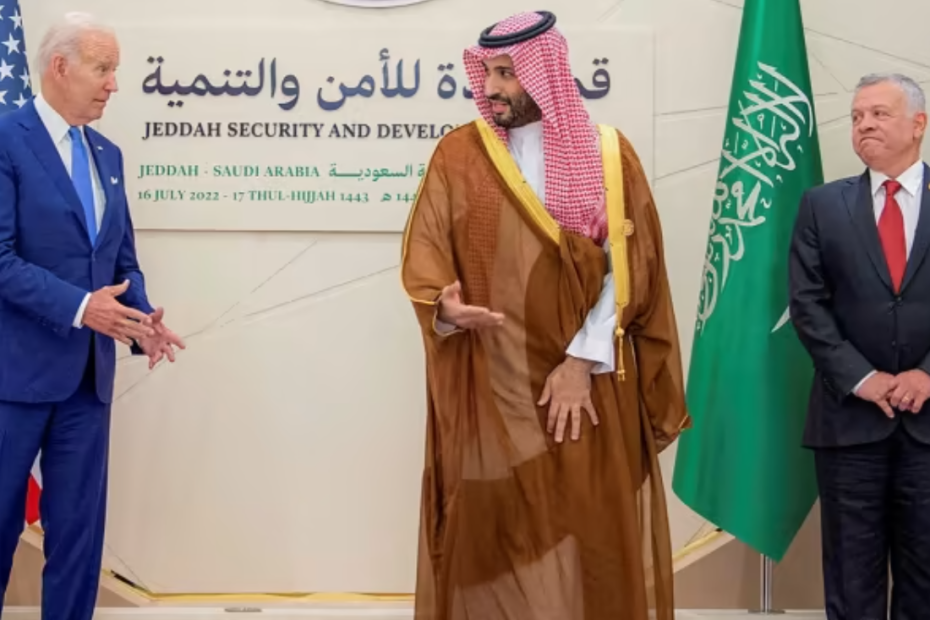 President Joe Biden is facing bipartisan flack for his humilating ‘fist bump’ with Saudi Crown Prince Mohammed bin Salman Al Saud, also known as MBS, during the course of his groveling to persuade the Middle Eastern nation to significanly increase its oil output.

MBS smirked during bilateral talks on Friday in a knowing display of how embarrassing the U.S. president’s kow-towing was to the Saudis.

The reporter was quickly ushered out of the room. Both President Biden and the Saudi crown prince ignored the question.

Biden later dismissed a reporter’s question after the meeting that he was under “a lot of fire” for greeting Saudi Arabia’s Crown Prince Mohammed bin Salman with a fist-bump and dismissed questions about the potential of another murder like Jamal Khashoggi’s.

“What a silly question,” Biden said to reporters. “How could I possibly be sure of any of that?”

“I just made it clear if anything occurs like that again there, [they will] get that response and much more,” he added.

Washington Post Publisher Fred Ryan reacted to the president’s ‘fist-bump’ with MBS, calling it ‘shameful’ in light of Biden’s promises to make the Saudi regime a ‘pariah’ state after the assassination of Washington Post journalist and apparent jihadist Jamal Khashoggi.

“The fist bump between President Biden and Mohammed bin Salman was worse than a handshake—it was shameful,” Ryan wrote. “It projected a level of intimacy and comfort that delivers to MBS the unwarranted redemption he has been desperately seeking.”

And for all of President Biden’s supine appeasement of the Saudis to marginally increase oil production, the White House would only suffer a stinging rejection. The Saudi regime would later announce it was already running near maximum capacity.

But amidst the intense blowback for the botched foreign policy junket, Biden tried to salvage the disastrous optics with the dubious braggadocio that he had confronted MBS, after all.

Biden on Sunday “disputed claims by Saudi Arabia’s state minister for foreign affairs that he did not confront the crown prince about Khashoggi’s murder,” National Review reported.

The president responded, “No,” when asked if the Saudi foreign minister, who was at the meeting in question, was telling the truth. Days before, Biden claimed that he told the crown prince he believed he was responsible for Khashoggi’s murder.

“I indicated I thought he was,” Biden said on Friday. “He said he was not personally responsible for it, and he took action against those who were responsible.”

In 2019, Biden had called Khashoggi’s death a “flat-out murder” while on the campaign trail and called for serious consequences.

“There’s very little social redeeming value in the present government in Saudi Arabia,” Biden said at a 2019 Democratic primary debate. “They have to be held accountable.”

The Washington Post, however, contradicted Biden’s narrative that he had confronted MBS, since his senior aides had decided that coaxing Saudi Arabia into producing more oil was more important than making it a true ‘pariah’ state.

Thus, the Saudis argue that Biden is lying, and there are White House sources that suggest the president is lying. Same old blustering Biden.