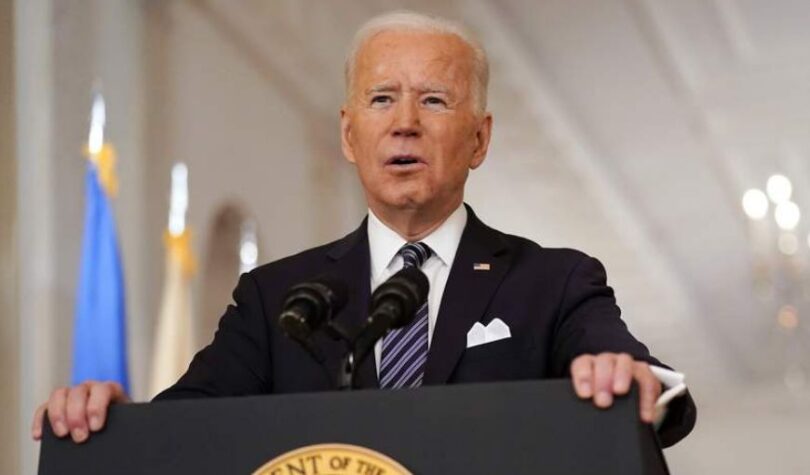 “US regulators finalize rule requiring Americans who work at big companies to get vaccinated by Jan. 4 or test weekly,” the AP reported on Thursday without providing further details.

“The Biden administration ordered U.S. companies Thursday to ensure their employees are fully vaccinated or regularly tested for Covid-19 by Jan. 4 — giving them a reprieve over the holidays before the long-awaited and hotly contested mandate takes affect,” CNBC reported.

“The administration on Thursday also pushed back the deadline for federal contractors to comply with a stricter set of vaccine requirements for staff from Dec. 8 to Jan. 4 to match the deadline set for other private companies and health-care providers,” the report added.

“The newly released rules, issued by the Occupational Safety and Health Administration under the Labor Department, apply to businesses with 100 or more employees,” the report noted. “All unvaccinated workers must begin wearing masks by Dec. 5 and provide a negative Covid test on a weekly basis after the January deadline, according to the requirements. Companies are not required to pay for or provide the tests unless they are otherwise required to by state or local laws or in labor union contracts. Anyone who tests positive is prohibited from going into work.”

“Companies also have until Dec. 5 to offer paid time for employees to get vaccinated and paid sick leave for them to recover from any side effects,” the report added.

The Occupational Safety and Health Administration will also be policing workplaces nationwide to ensure compliance with the unlawful mandate.

“OSHA, which polices workplace safety for the Labor Department, will provide sample implementation plans and fact sheets among other materials to help companies adopt the new rules,” CNBC reported.

“OSHA will also conduct on-site workplace inspections to make sure companies comply with the rules, a senior administration official said. Penalties for noncompliance can range from $13,653 per serious violation to $136,532 if a company willfully violates the rules,” the report added.

“The vaccine mandate, which covers 84 million people employed in the private sector, represents the most expansive use of federal power to protect workers from Covid-19 since the virus was declared a pandemic in March 2020,” it continued.

“Biden’s vaccine mandate for large employers begins Jan 4, with hefty fines for noncompliance,” Disclose reported. “OSHA plans to send out agents to check that workplaces are in compliance with the rule. For willful violations, a company can be fined up to $136,532. The standard penalty is $13,653 for a single violation.”

According to the latest data, 75% of the U.S. population has had at least one dose of a Covid vaccine, while 67% are considered to be “fully vaccinated,” although the administration has now endorsed “boosters” since the vaccines’ efficacy wears off so quickly. Covid cases are down over 50% since September, even as Covid vaccines do not prevent transmission or significantly slow the spread of Covid.

“We, the Attorneys General of 24 states, write in opposition to your attempt to mandate the vaccination of private citizens,” the AGs’ letter reads. “On September 9, you announced that you would be ordering the Department of Labor to issue an emergency temporary standard, under the Occupational Safety and Health (OSH) Act , which would mandate that private sector employers require most of their employees to either get a COVID-19 shot, submit to weekly testing, or be fired. Your plan is disastrous and counterproductive. From a policy perspective, this edict is unlikely to win hearts and minds-it will simply drive further skepticism. And at least some Americans will simply leave the job market instead of complying.”

“This will further strain an already-too-tight labor market, burdening companies and (therefore) threatening the jobs of even those who have received a vaccine,” the letter continues. “Worse still, many of those who decide to leave their jobs rather than follow your directive will be essential healthcare workers. This is no idle speculation. A New York hospital recently announced its plans to stop delivering babies after several staff members resigned in the face of New York’s mandate} And recent polling suggests those frontline healthcare workers are not outliers. 2 Thus, Mr. President, your vaccination mandate represents not only a threat to individual liberty, but a public health disaster that will displace vulnerable workers and exacerbate a nationwide hospital staffing crisis, with severe consequences for all Americans.”

“This government edict is also likely to increase skepticism of vaccines. You emphasized at your September 9 announcement ‘that the vaccines provide very strong protection from severe illness from COVID-19 … [and] the world’s leading scientists confirm that if you are fully vaccinated, your risk of severe illness from COVID-19 is very low’,” the letter continues. “You further stated that ‘only one of out of every 160,000 fully vaccinated Americans was hospitalized for COVID per day.’ And you said ‘the science makes clear’ that ‘if you’re fully vaccinated, you’re highly protected from severe illness, even if you get COVID-19.’ The mandate, however, sends exactly the opposite signal: it suggests that the vaccinated need protection from those who, for whatever personal reason, choose not to or cannot receive a COVID-19 shot. That is hardly a statement of confidence in the efficacy of vaccines.”

“The policy also fails to account for differences between employees that may justify more nuanced treatment by employers,” the letter states. “Most glaringly, your policy inexplicably fails to recognize natural immunity. Indeed, the CDC estimated that by late May 2021, over 120 million Americans had already been infected, and that number is likely tens of millions higher today.4 And your sweeping mandate fails to account for the fact that many workers-for example, those who work from home or work outdoors-are at almost no risk of exposure from their co-workers regardless of vaccine status. A one-size-fits-all policy is not reasoned decision-making. It is power for power’s sake.”

“Courts are skeptical because the law demands it,” the letter continues. “To justify an emergency temporary standard, OSHA must determine that ’employees are exposed to grave danger from exposure to substances or agents determined to be toxic or physically harmful or from new hazards …. ‘ and it must conclude that ‘such emergency standard is necessary to protect employees from such danger.’ Each of the italicized phrases defeats your attempt to rely on this statute. First, while ‘grave danger’ is left undefined, your own statements during the announcement that those who are vaccinated have little chance of hospitalization or death undercut any assertion that there is ‘grave danger.’ Moreover, many Americans who have recovered from COVID-19 have obtained a level of natural immunity, and the statistics are clear that young people without co-morbidities have a low risk of hospitalization from COVID-19. You thus cannot plausibly meet the high burden of showing that employees in general are in grave danger.”

“What is more, the COVID-19 virus is not the sort of ‘substance,’ ‘agent,’ or ‘hazard’ to which the statute refers,” the attorney generals point out. “OSHA, as its full name suggests, exists to ensure occupational safety. In other words, it deals with work-related hazards, not all hazards one might encounter anywhere in the world. Congress made this clear in empowering OSHA to establish workplace standards not concerning whatever it likes, but rather ’employment and places of employment. ‘ The findings Congress passed with the law say the bill was motivated by a concern that ‘personal injuries and illnesses arising out of work situations impose a substantial burden upon . . . interstate commerce.’ Congress expressly intended to encourage ’employers and employees in their efforts to reduce the number of occupational safety and health hazards at their places of employment’.”

“When used in the context of a law directed toward occupational safety, the words ‘substances,’ ‘agents,’ and ‘hazards’ relate to the dangers presented by the job itself-for example, chemicals used at job sites and tools used to carry out tasks-not to dangers existing in the world generally. And indeed, this is consistent with how the Act elsewhere uses these words. One provision, for example, requires the government to prepare a report ‘listing all toxic substances in industrial usage.’ Another provision repeatedly imposes duties and powers regarding ‘substances’ and ‘agents’ to which employees are exposed as part of their employment. Still another requires studies regarding ‘the contamination of workers’ homes with hazardous chemicals and substances, including infectious agents, transported from the workplaces of such workers.’ All of these provisions are most naturally focused on dangers occurring at work because of one’s work, as opposed to dangers occurring in society generally, including at work.”

“Finally, broadly mandating vaccinations (or weekly COVID-19 testing) for 80 million Americans, simply because they work at a business of a certain size, hardly seems ‘necessary’ to meet any such danger,” the attorney generals note. “On the contrary, it is vastly overbroad and inexact. There are many less intrusive means to combat the spread of COVID-19 other than requiring vaccinations or COVID- 19 testing. The risks of COVID-19 spread also vary widely depending on the nature of the business in question, many of which can have their employees, for example, work remotely. The one-size­fits-almost-all approach you have decreed makes clear that you intend to use the OSH act as a pretext to impose an unprecedented, controversial public health measure on a nationwide basis that only incidentally concerns the workplace.”

The Biden administration will now undoubtedly be sued in federal court over this egregious overreach, which is not even a ‘law’ since it is not based on federal legislation.