The Department of Justice seized more than half a dozen additional documents, some classified, at President Biden’s residence in Wilmington, Deleware on Friday. The investigators had conducted a 13-hour search of the home, the president’s personal lawyer said Saturday evening.

“Yesterday, D.O.J. completed a thorough search of all the materials in the president’s Wilmington home,” the President’s lawyer Bob Bauer said in a statement. “It began at approximately 9:45 a.m. and concluded at around 10:30 p.m. and covered all working, living and storage spaces in the home.” 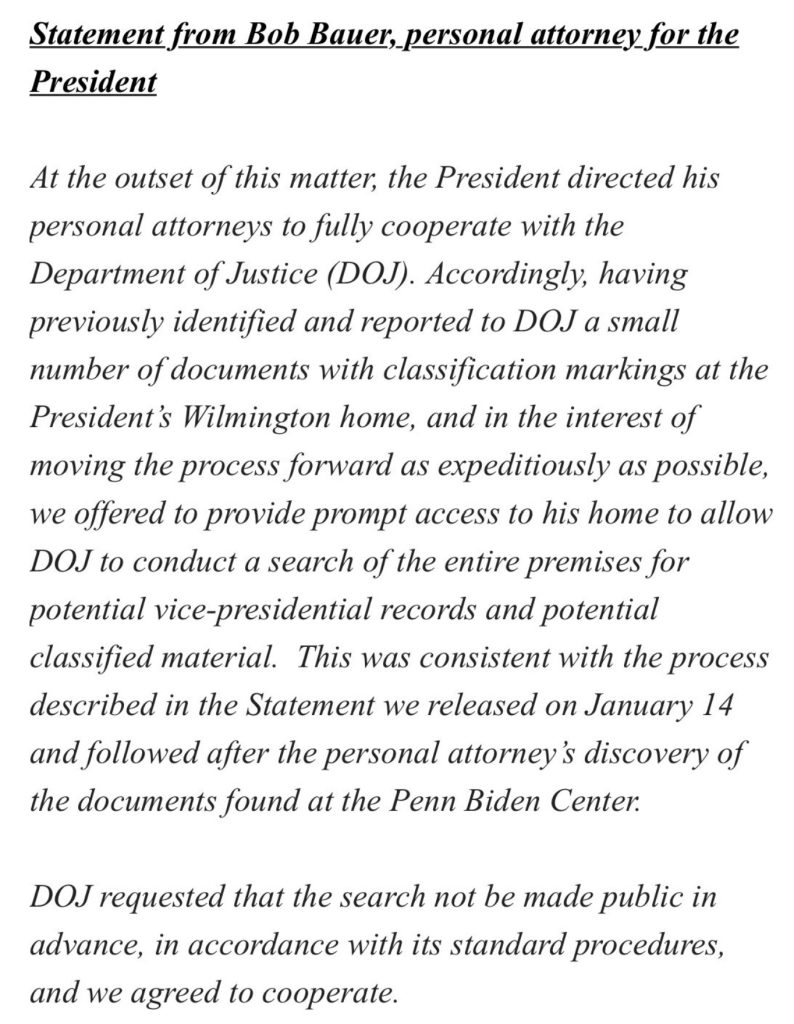 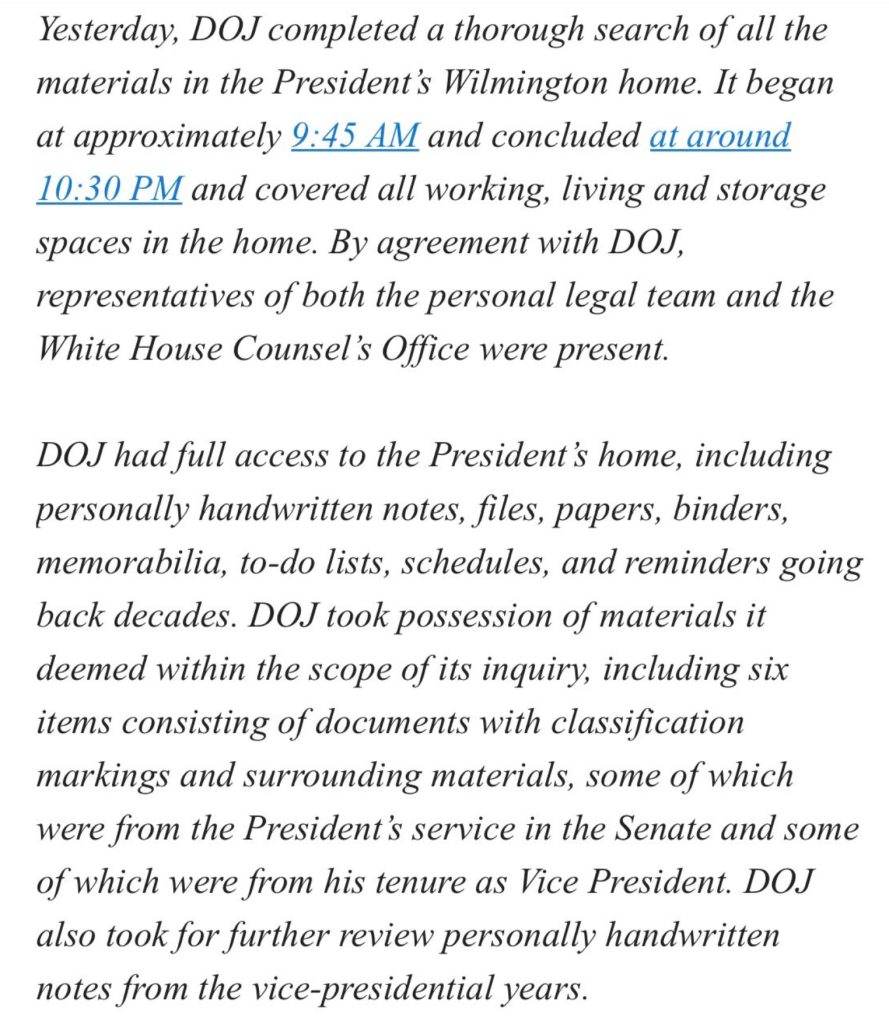 Richard Sauber, a member of the White House Counsel’s Office, added in another statement that the search was conducted and finished at the home on Friday. Neither the president nor Jill Biden, the first lady, were at the residence at the time. 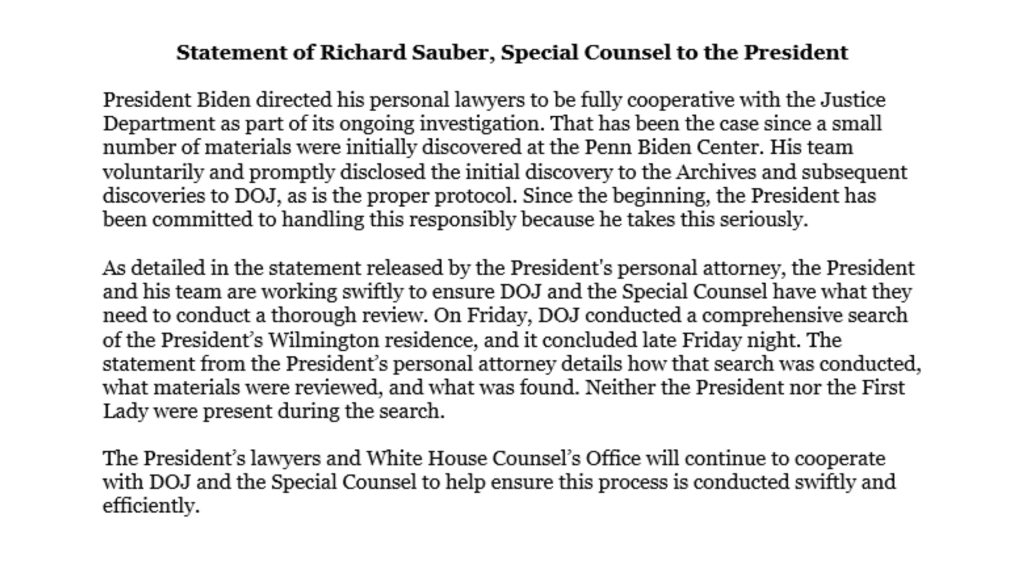 An important note from the statement released by the President's personal attorney:

POTUS's lawyers offered to provide DOJ prompt access to the Wilmington home, and gave DOJ full access to it, including personally handwritten notes, memorabilia, and papers going back decades. https://t.co/quWHXwc0yz

Before the 13-hour search of his home, it appeared that President Joe Biden was being given special treatment by the Department of Justice, as compared to the intrusive FBI raid carried out on former President Donald Trump last August.

In November, just days prior to the midterm elections, Biden’s lawyers reportedly found classified documents from the vice president’s time in office at his home in Wilmington, Delaware, as well as at the Penn Biden Center in Washington D.C.

On Tuesday, the Wall Street Journal reported that the FBI decided to allow Biden’s lawyers to sort through the classified and unclassified documents unsupervised by agents.

“The Justice Department considered having FBI agents monitor a search by President Biden’s lawyers for classified documents at his homes but decided against it, both to avoid complicating later stages of the investigation and because Mr. Biden’s attorneys had quickly turned over a first batch and were cooperating, according to people familiar with the matter,” the Wall Street Journal reported.

The Department of Justice showed unusual restraint in comparison to the August raid on Mar-a-Lago against former President Donald Trump. The FBI agents swept up all materials believed to be relevant to its investigation of a National Archives and Records Act complaint. However, the search for Biden’s outstanding classified documents was handled out with utmost politeness, even though he did not possess ultimate declassification authority when he took the documents.

“After Mr. Biden’s lawyers discovered documents marked as classified dating from his term as vice president at an office he used at a Washington-based think tank on Nov. 2, the Justice Department opened an inquiry into why and how they got there,” the report added. “Mr. Biden’s legal team prepared to search his other properties for any similar documents, and discussed with the Justice Department the prospect of having FBI agents present while Mr. Biden’s lawyers conducted the additional searches.”

In contrast to a swarm of FBI agents scouring through Joe Biden’s homes, garages, Corvette stingray, and offices, the bureau decided to let Biden’s attorneys go through the homes and turn over whatever documents they saw fit to give the authorities. The FBI claims this was done out of deference to a special counsel investigation.

“Instead, the two sides agreed that Mr. Biden’s personal attorneys would inspect the homes, notify the Justice Department as soon as they identified any other potentially classified records, and arrange for law-enforcement authorities to take them,” the report noted.

Contrast this hands-off treatment to the abuse that former President Donald Trump was subjugated to at the hands of the FBI. The August raid was sweeping in its scope; indeed, it was carried out like a fishing expedition.

A DOJ official told Just The News in August that the FBI acted “outside the scope” of the search warrant by seizing Donald Trump’s passports during the raid.

“Three passports. Privileged documents. A file on a presidential pardon,” the report reads. “As evidence surfaces about what FBI agents seized during the raid of former President Donald Trump’s estate in Mar-a-Lago, new questions about the real focus of the investigation and new avenues for legal challenges are bubbling to the surface.”

Since Attorney General Merrick Garland waited weeks to ‘personally authorize’ the FBI raid, and the bureau took days after the search warrant was authorized to execute it, there is no plausible reason to believe there was an urgent need to violate two centuries of presidential decorum and the rule of law.

The FBI showed that it was more than capable of treating a President of the United States with deference and respect. The bureau decided to throw all that outside the window in a desperate effort to ‘get Trump.’

Rep. James Comer (R-Ky.) the newly appointed chairman of the House Oversight and Accountability Committee, said on CNN’s “State of the Union” that the disparity in treatment was striking.

“Joe Biden used as his closing argument during the midterm elections that Republicans were a threat to democracy,” Comer said. “And he cited the fact that President Trump mishandled the documents. While he was doing this, he knew very well that he himself had possession of classified documents.”

“So the hypocrisy here is great,” he added. “We’re very concerned about a lack of transparency. We’re very concerned, as I have said many times, about a two-tiered system of justice in America. And we just want equal treatment. And, hopefully, we will get some answers very soon.”

When Jake Tapper tried to press Comer to speak out about Donald Trump, the Congressman was blunt.

“At the end of the day, my biggest concern isn’t the declassified documents, to be honest with you,” he replied. “My concern is how there’s such a discrepancy in how former President Trump was treated by raiding Mar-a-Lago, by getting the security cameras, by taking pictures of documents on the floor, by going through Melania’s closet, vs. Joe Biden.”

The disparity in treatment of the two president’s is beyond “hypocrisy.” It is yet another case of the FBI’s dangerous weaponization under the Biden presidency.

But now, the Department of Justice can claim that it “raided” Joe Biden’s Delaware home, as well.