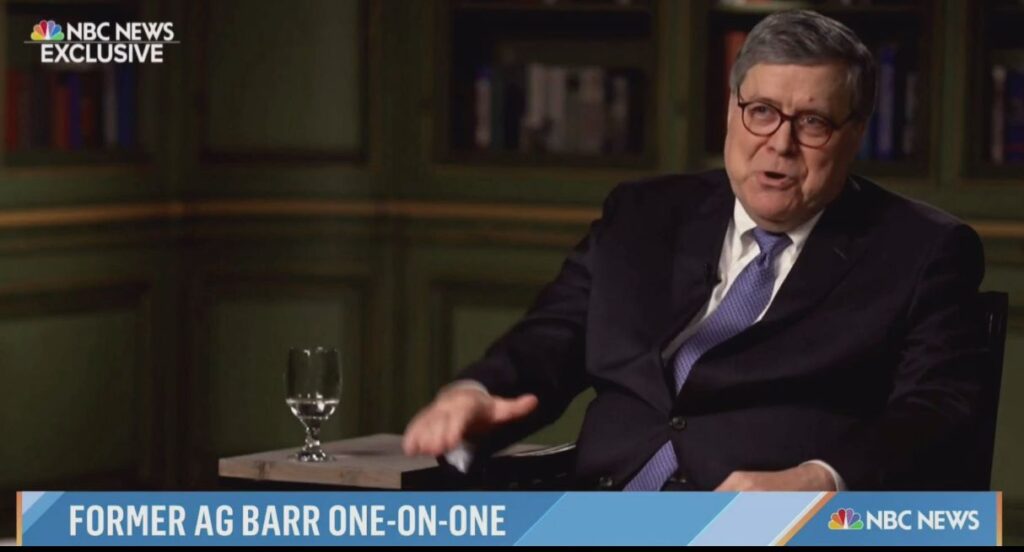 Former Attorney General Bill Barr has made it known that he blames Donald Trump in the “broad sense” for the Capitol riots that took place on January 6.

Barr, who has written a forthcoming book “One Damn Thing After Another,” revealed his battle with Donald Trump over what he referred to as “bullsh*t” claims of election fraud in an interview to be aired Sunday on NBC. Watch the teaser below:

“Take us back to that day, December 1st, you were in the SUV,” NBC’s Lester Holt said. “Did you know you were going to end up in the Oval Office before the day was up?”

“I assumed I was,” Barr replied.

“This is a fraud on the American public,” Trump said. “This is an embarrassment to our country.”

“At that point, Barr knew that wasn’t true,” Holt remarks. “He’d even had the justice department investigate. Now he was being summoned to the president’s private dining room after saying in an interview with the AP that Trump’s claims of election fraud were wrong.”

“And I told him that all this stuff was bullsh*t  about election fraud and it was wrong to be shoveling it out the way his team wasm” Barr said.

“He also told Trump what he thought of his legal team,” Holt adds. “Not a lot.”

“I said, the reason you are where you are is because you wheeled out a clown show of lawyers,” Barr commented.

“Clown car or something like that,” Barr added. “I said, it’s just a bunch of clowns.”

“Who, who were you referring to? Rudy Giuliani?” Holt asked.

“His cracker jack legal team, among others,” Barr replied.

“Barr says the president shot back listing the ways he said Barr had failed him,” Holt narrated. “That’s when Barr says he offered up resignation.”

“I said, okay, well, look, I, understand you’re upset with me and I’m perfectly happy to tender my resignation,” Barr said. “And then ‘boom!'”

“He slaps the desk,” Holt said.

“And he slapped the desk, and he said accepted, accepted,” Barr said. “And then ‘boom,’ he slapped it again. Accepted. Go home. Don’t go back to your office. Go home. You’re done.”

“When we asked the former president about this meeting, he disputed Barr’s account and told us he was the one who demanded Barr’s resignation,” Holt added. “Either way, Barr handed in a resignation letter two weeks later and has not spoken with Donald Trump since. He does not want him to run for president again.

“January 6th, the riot,” Holt said. “Do you think that president Trump was responsible for what happened here, ultimately?”

“I do think he was responsible in the broad sense of that word, and that it appears that part of the plan was to send this group up to the Hill,” Barr said. “I think the whole idea was to intimidate Congress. And I think that that was wrong.”

There are a number of things wrong with Barr’s account. President Trump could not have “incited” the Capitol attack that was planned by far-right extremists for days before his speech was given.

The New York Times reports that the “first barriers were breached” at 12:53 p.m. at the Northwest side of the Capitol. The NY Times then claims that Trump’s “call to action” was at 1:12 p.m. Of course, this is nearly twenty minutes after the purported first “breach” of the barricades. The speech was given a mile and a half away and Donald Trump specifically said to “peacefully” make your voices heard.

“In a three page letter to NBC news, President Trump trash Barr’s book as ‘fake’ and her personal insults at his former attorney general, calling him a ‘coward, a big disappointment and lazy.”

The partisan House Democrat-led January 6 committee argued in a court briefing filed on Wednesday that Donald Trump participated in a “criminal conspiracy” to “defraud the United States.” The committee is submitting a request that emails and texts from attorney John Eastman to Donald Trump be turned over.

“The facts we’ve gathered strongly suggest that Dr. Eastman’s emails may show that he helped Donald Trump advance a corrupt scheme to obstruct the counting of electoral college ballots and a conspiracy to impede the transfer of power,” the committee tweeted on Wednesday night.

House Minority Leader Kevin McCarthy disputed that the committee is serving a legitimate purpose with its ‘investigation.’

“This committee is not conducting a legitimate investigation as Speaker Pelosi took the unprecedented action of rejecting the Republican members I named to serve on the committee. It is not serving any legislative purpose,” he argued.

The January 6 committee’s findings do not constitute a legal charge, but the committee is recommending that the Department of Justice investigate Donald Trump for felony obstruction of official proceedings.