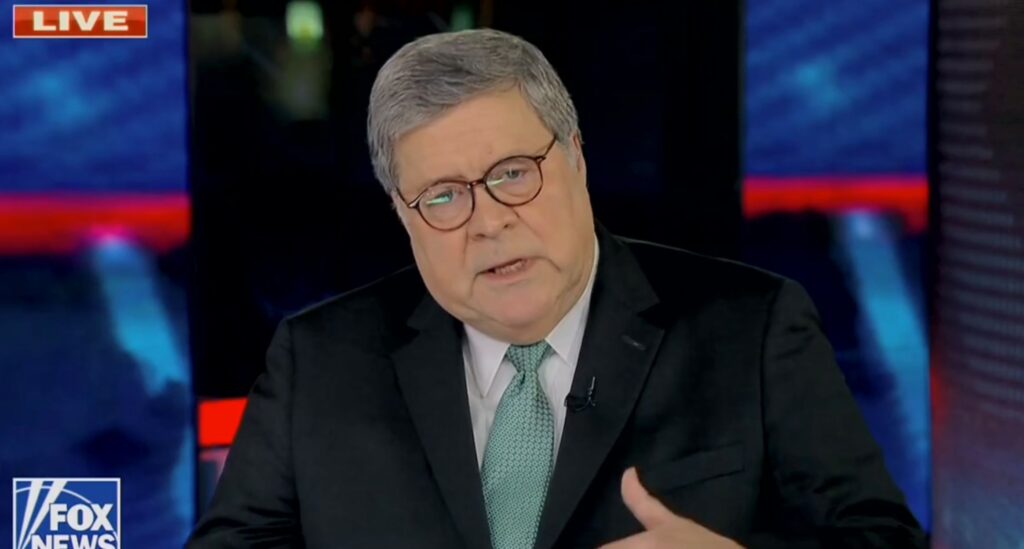 The Hunter Biden laptop story has been resurrected in light of the New York Times conceding the laptop is likely to be authentic deep within an article on the president’s son’s legal troubles.

This week, the New York Times provided further confirmation that the U.S. media, the Intelligence Community, and Joe Biden himself lied when they denied the authenticity of Hunter Biden’s laptop and called it probable ‘Russian disinformation.’

Trump’s attorney general Bill Barr was confronted by Jesse Watters on the Department of Justice’s seeming lack of pushback against the intelligence community’s false claims.

“Did you just hear the conversation about the laptop from hell?” Watters asked.

“When this was all going down in the fall, did you see what the left was doing with this disinformation campaign?” Watters continued. “Did you come out and say anything about that?”

“Absolutely,” he said. “As soon as this letter came out from these so-called intelligence specialists, the DNI, John Ratcliffe at the time, and the FBI, which worked for me, both came out and said this was not the result of disinformation, Russian disinformation. The media ignored that completely. Just kept on going with the disinformation line.”

“That’s pretty egregious,” Watters said. “Would you say that there was a conspiracy between Big Tech, former intelligence officials, the media, the Democrats to, I don’t know, let’s just use the word ‘rig’ an election?”

“Yes,” he responded. “That definitely made an impact on the election, suppressing that news. And it’s not a question of whether it was criminal or not. Just the facts alone were shameful and most Americans would immediately see what was going on and how repulsive it was and it would have had an effect. The issue of criminality is a different issue.”

“We’ll get to that at some point,” Watters commented.

So, it turns out that Barr did call out the Russian disinformation narrative at the time, the media just ignored it.

Despite the confession that the 2020 election was in a sense “rigged,” Barr has made it known that he blames Donald Trump in the “broad sense” for the Capitol riots that took place on January 6.

Barr, who has written a forthcoming book “One Damn Thing After Another,” revealed his battle with Donald Trump over what he referred to as “bullsh*t” claims of election fraud in an interview with NBC.

“January 6th, the riot,” Holt said. “Do you think that president Trump was responsible for what happened here, ultimately?”

“I do think he was responsible in the broad sense of that word, and that it appears that part of the plan was to send this group up to the Hill,” Barr said. “I think the whole idea was to intimidate Congress. And I think that that was wrong.”

There are a number of things wrong with Barr’s account. President Trump could not have “incited” the Capitol attack that was planned by far-right extremists for days before his speech was given. Furthermore, it is Trump’s constitutional right to contest election results, as Democrats have done many times, and to complain that the election was “rigged.” He instructed marchers to “peacefully” make their voices heard and those in attendance could not even reach the Capitol Building when the riot was launched.

Donald Trump’s complaints against the deep state are myriad. They launched a bogus Russia collusion “witch hunt” for years to spy on his campaign and sabotage his presidency. The Intelligence Community latched onto the Hunter Biden “Russian disinformation” claim to undermine his 2020 re-election campaign.

The New York Times’ corroboration of the Hunter laptop emails was buried deep within its story, but nonetheless shows that Hunter Biden could be guilty of yet another crime: Knowingly avoiding Foreign Agent Registration Act requirements while his father ran for president.

“Last year, prosecutors interviewed Mr. Archer and subpoenaed him for documents and grand jury testimony, the people said. Mr. Archer, who was sentenced last month in an unrelated securities fraud case in which a decision to set aside his conviction was reversed, had served with Mr. Biden on Burisma’s board, starting in 2014,” the Times reported.

“People familiar with the investigation said prosecutors had examined emails between Mr. Biden, Mr. Archer and others about Burisma and other foreign business activity,” the report added. “Those emails were obtained by The New York Times from a cache of files that appears to have come from a laptop abandoned by Mr. Biden in a Delaware repair shop. The email and others in the cache were authenticated by people familiar with them and with the investigation.”

“In some of the emails, Mr. Biden displayed a familiarity with FARA, and a desire to avoid triggering it,” the report noted.

The Hunter Biden laptop has become a national security nightmare for the Biden administration. When former Attorney General Bill Barr, no fan of Donald Trump, is willing to admit it, America has a real problem on its hands.