Black Lives ‘Matter’ to BLM. But Cuban lives, however, do not.

That is the upshot of an unsurprising statement from the Marxist organization supporting the Cuban regime released on Wednesday night. The language is striking and worth noting. 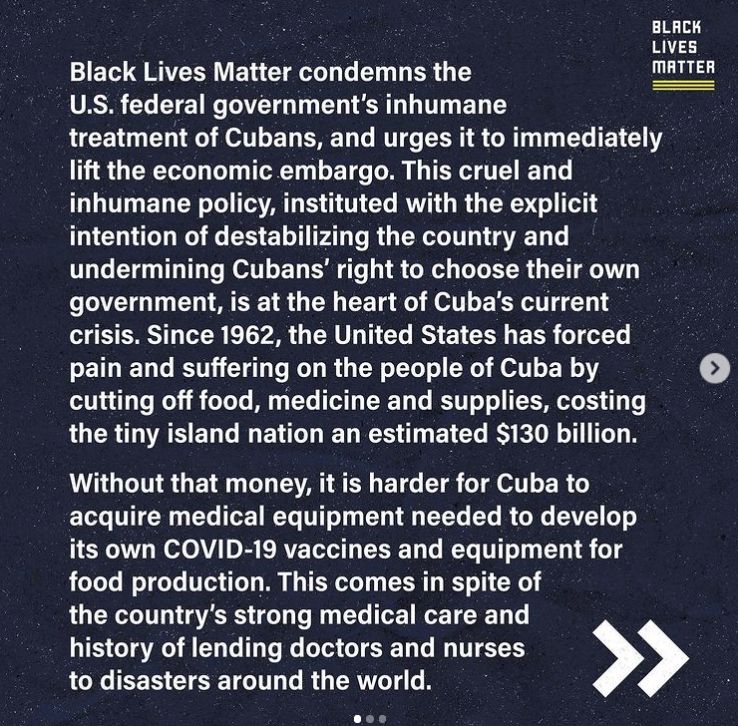 “Black Lives Matter condemns the U.S. federal government’s inhumane treatment of Cubans, and urges it to immediately lift the economic embargo,” BLM stated on Instagram. “This cruel and inhumane policy, instituted with the explicit intention of destabilizing the country and undermining Cubans’ right to choose their own government, is at the heart of Cuba’s current crisis.”

It is a message that echoes the Democratic Socialists of America’s International appeal earlier this week. The scapegoating of a single capitalist nation’s unwillingness to provide aid and comfort to an inherently oppressive communist Cuban regime is latched onto by socialist propagandists instead of blaming the faults of Cuba’s own economic system.

“Since 1962, the United States has forced pain and suffering on the people of Cuba by cutting off food, medicine and supplies, costing the tiny island nation an estimated $130 billion,” BLM wrote.

But again, why would the ideal communist system need a capitalist nation to provide it with those things unless it was completely dysfunctional and unable to provide them itself? Why do communist nations constantly descend into poverty and deprivation for the masses if their system works so well?

“Without that money, it is harder for Cuba to acquire medical equipment neeedd to develop its own COVID-19 vaccines and equipment for food production,” the statement added. “This comes in spit of the country’s strong medical care and history of lending doctors and nurses to disasters around the world.”

This is an entirely self-contradictory statement. Remember, this BLM organization is held up as the paragon of virtue in schools and universities around the United States, but it is apparently incapable of rendering a comprehensible, fact-based, intellectually honest case to back up its views.

BLM’s statement concludes with an appeal to President Biden to lift the embargo on Cuba. In other words, BLM wants to save the Cuban communist regime from itself.

The response to Black Lives Matters’ statement from many observers was furious. Greg Price noted the irony.

BLM sides with communist regimes and leads a year of protests that burned down entire communities while their supporters in the media, corporate America, and the Democratic Party declared them culturally unacceptable to criticize https://t.co/zGP3JEZaxR

“BLM sides with communist regimes and leads a year of protests that burned down entire communities while their supporters in the media, corporate America, and the Democratic Party declared them culturally unacceptable to criticize,” Price noted.

The extortionist ring known as the Black Lives Matter organization took a break today from shaking down corporations for millions & buying themselves mansions to share their support for the Communist regime in #Cuba https://t.co/xir94EIJ4X

“The extortionist ring known as the Black Lives Matter organization took a break today from shaking down corporations for millions & buying themselves mansions to share their support for the Communist regime in #Cuba,” Senator Marco Rubio said.

Fabiola Santiago, writing in the Miami Herald, was also blunt.

“How can a movement supposedly dedicated to seeking justice turn a blind eye to what’s going on in Cuba, as if those batons, chokeholds, and bullets weren’t used on Black people?” he asked. “The regrettable, shameful answer came Wednesday night on the organization’s official Instagram page: Because the organization’s leadership stands solidly behind Cuba’s oppressive, white-led Communist regime.”