BLM Blames Biden for ‘Terrorizing’ Black Communities, Says He is Worse Than Trump 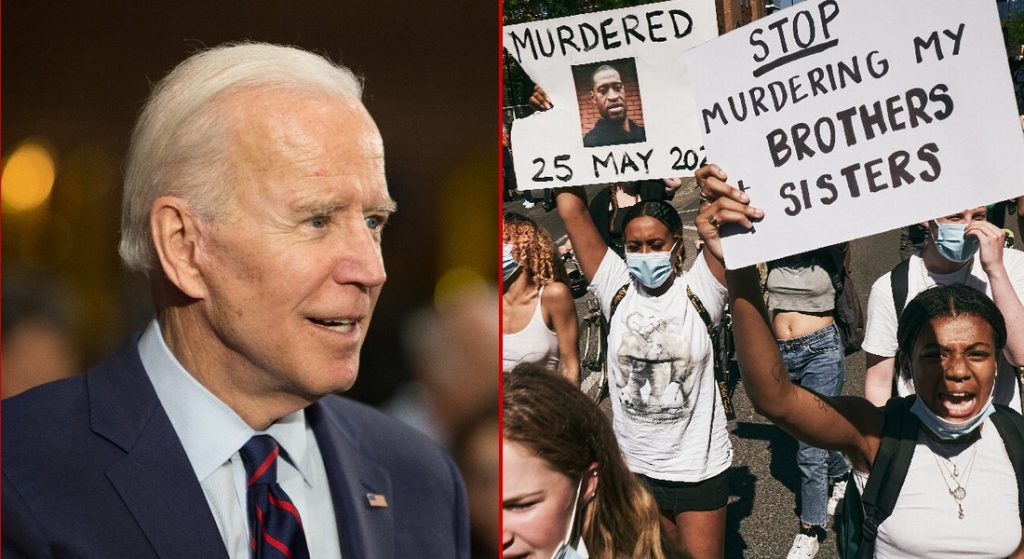 “Biden’s first 100 days are up in 10 days,” BLM tweeted. “By then we need him to #End1033, which transfers military equipment into the hands of police across the country– including school & campus police. Another example? The military you see out on your streets ahead of the Chauvin verdict.”

“Biden is currently sending more military equipment to our neighborhoods than Trump did,” BLM continued. “You read that right. Our communities are being terrorized at a greater rate than they had been under Trump.”

“Our screens continue to be filled with state-sanctioned violence against Black people,” the group claimed. “And when we peacefully protest in the name of Black lives, we’re met with violence from police. But when white supremacists stormed the Capitol in January, they were invited in and posed for pictures with police.”

“No responsible leader should be increasing the weapons police have access to — and if President Biden cares about the countless Black folks who showed up to put him in office, he would recognize that,” the group continued.

Property insurance data estimates that 140 of the Black Lives Matter protests in 2020 cost communities between $1 billion and $2 billion in damages. Hundreds of police officers were injured in BLM protests in 2020, two of them killed. BLM was linked to over 91% of riots in a three-month period last year, which gave rise to numerous innocent civilians’ deaths. One particularly tumultuous period led to at least 19 deaths.

“The death toll from two weeks of demonstrations over the death of George Floyd continues to creep upward, with at least 19 people—a majority of whom are black—now dead,” Forbes reported last June.

The rioting could get even worse this year, even as the Chauvin trial verdict found the officer guilty of all homicide counts against him in the George Floyd case. Activists have sought out cases to become enraged over. The Ma’Khia Bryant protesting was partially quelled due to bodycam footage showing the 16-year-old black girl was about to stab another black female before the officer shot her.

A case in Elizabeth City regarding the police shooting of Andrew Brown, who fled a search warrant regarding potential felony drug possession, is currently reaching the boiling point. Amid demands for the body cam footage to be released, seven officers have gone on leave and one officer has resigned. The family is expected to see the body cam footage at some point today.

A press conference on the shooting was held at 11:30 a.m. on Monday and Attorney Ben Crump claimed that law enforcement wanted to make “redactions” to the video.

Activists at the Monday press conference shouted “where is Wooten?” in regards to local Sheriff Tommy Wooten and “we want video.” The volatile situation may turn explosive if the body cam video does not show a strong justification for the police’s use of deadly force.

While activists claim there is an “epidemic” of police shooting unarmed black males in America, the Washington Post’s police shooting database underscores how rare it actually is. Its reported police killings of unarmed black males in 2019 was a total of 11 cases. There was an uptick in 2020 at 17 such cases. And in 2021, there are four cases as of this date – a trendline of an expected 10-12 cases. These cases may be tragic, but there is not an “epidemic” of such cases in a population of 20 million black males in the United States.

Black Lives Matter, the official organization, has come under increasing fire for lacking transparency in its accounting. The multi-billion dollar non-profit organization has been opaque on its finances, while leadership have gone an extravagant spending spree.

The New York Post recently exposed self-described ‘Marxist’ Patrisse Khan-Cullors for amassing a  $3.2 million real estate “empire.” She insisted to the New York Post that she “didn’t use a penny of BLM donations on herself.”

“But in insisting she did not take a salary from the organization’s non-profit foundation, Khan-Cullors left unsaid whether she was paid through BLM’s network of similarly named for-profit entities,” the Post noted.

“What that pay might be is cloaked in secrecy, as BLM’s for-profit branches do not reveal spending and executive pay,” the report added.

Black Lives Matter often behaves in some ways like a multi-billion dollar business. If there is no demand for the business’s services, it is not against creating the demand itself. This is why it showed up in Columbus even before the Ma’Khia Bryant incident even before the shooting and has already protested in Elizabeth City, a sleepy North Carolina town with a population of around 17,000.

All civic organizations whose mission is ‘activism’ can become prey to a conflict of interest when it comes to actually solving problems. That is what politicians are paid to do; their relationship with activist organizations can lead them into temporary alliances that are easily forgotten after elections.

Now that Biden is showing BLM that its political services were appreciated, but the administration will ‘take it from here,’ the activist side is angrier than ever.  When it came to Trump, Black Lives Matter knew the law-and-order president was not on its side. But it stings even more that a presumed ally like Biden does not appear to have its back. Hell hath no fury like an activist scorned. The American people, unfortunately, are the ones who will have to pay the price.