Bombshell: Biden Put a Halt to Trump-Era Afghan Evacuation Plan That Would Have Saved Americans

President Joe Biden’s lack of judgment on the Afghan withdrawal extends well beyond overruling his top generals, refusing to leave behind a contingency force to secure airfields, failing to secure vital military equipment, and exposing thousands of Americans and Afghan allies to the murderous wrath of the Taliban.

A new report at the National Pulse shows that the Biden administration actually canceled a ‘crisis response’ plan that would have provided a roadmap for evacuating diplomats, staffers, and interpreters from the war-torn nation.

“Joe Biden’s State Department moved to cancel a critical State Department program aimed at providing swift and safe evacuations of Americans out of crisis zones just months prior to the fall of Kabul,” The National Pulse reported in its exclusive.

“The ‘Contingency and Crisis Response Bureau’ – which was designed to handle medical, diplomatic, and logistical support concerning Americans overseas was paused by Antony Blinken’s State Department earlier this year,” the Pulse continued. “Notification was officially signed just months before the Taliban’s takeover of Afghanistan.”

The “sensitive but unclassified” document came from the desk of Deputy Secretary of State Brian P. McKeon. It is shown in part below. 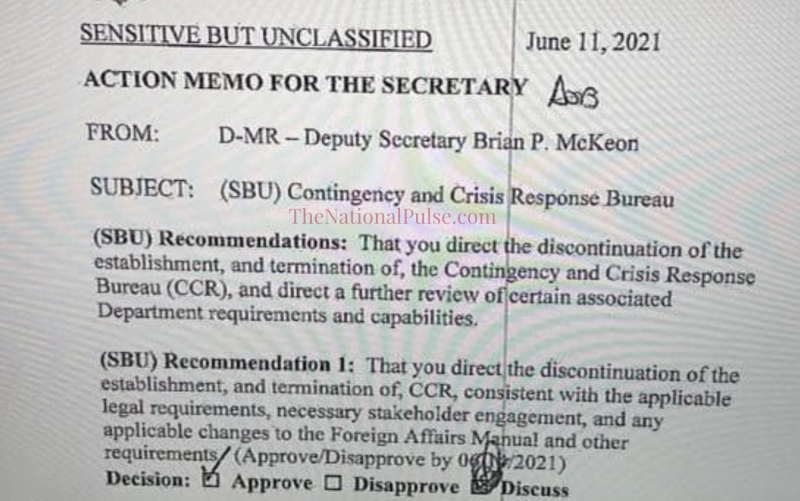 The National Pulse points out that although the document is dated June 11, 2021, “the decision to pause the program may have come as early as February.”

The subject line reads: “(SBU) Contingency and Crisis Response Bureau,” and the body of the document recommends:

“That you direct the discontinuation of the establishment, and termination of, the Contingency and Crisis Response Bureau (CCR), and direct a further review of certain associated Department requirements and capabilities.”

“That you direct the discontinuation of the establishment, and termination of, CCR, consistent with the applicable legal requirements, necessary stakeholder engagement, and any applicable changes to the Foreign Affairs Manual and other requirements.”

It says the recommendations were approved on June 11th 2021. The report follows upon further ill-advised decisions made by the Biden administration that will wind up costing people’s lives and billions of dollars in military equipment.

Biden sat down with the former Clinton staff member George Stephanopoulos in a one-on-one interview that is set to air on Wednesday night. The clips that have come out on the interview thus far are damning.

“When you look at what’s happened over the last week, was it a failure of intelligence, planning, execution, or judgment?” Stephanopoulos asked.

“Look, I don’t think it was a fair — look it was a simple choice, George,” Biden replied. “When they — when the Taliban — let me back up and put it another way. When you had the government of Afghanistan, the leader of that government getting in a plane and taking off and going to another country, when you saw the significant collapse of the Talib — Afghan troops we had trained, up to 300,000 of them — just leaving their equipment and taking off, that was, you know, I’m not — that’s what happened. That’s simply what happened.”

The ABC News clip then jumps to another part in the interview, when Biden gives his assessment of what went wrong.

“But we’ve all seen the pictures,” Stephanopoulos said. “We’ve seen those hundreds of people packed into a C-17. We’ve seen Afghans falling”…

“That was four days ago, five days ago,” Biden interrupted angrily.

“What did you think when you first saw those pictures?” Stephanopoulos pressed.

Stephanopoulos was not persuaded by the president’s excuses.

“No— I don’t think it could have been handled in a way that — we;re gonna go back in hindsight and look, but the idea that somehow there’s a way to have gotten out without chaos ensuing. I don’t know how that happens.”

The military advice given to President Biden was detailed in a Wall Street Journal article following his Monday speech on the Afghanistan withdrawal. It is an indictment of the Commander-in-Chief’s decision and shows that the horrific aftermath is due to Biden’s failure to properly assess the risks of an immediate military withdrawal.

“The president’s top generals, including Chairman of the Joint Chiefs of Staff Army Gen. Mark Milley, urged Mr. Biden to keep a force of about 2,500 troops, the size he inherited, while seeking a peace agreement between warring Afghan factions, to help maintain stability,” the Wall Street Journal reported. “Defense Secretary Lloyd Austin, who previously served as a military commander in the region, said a full withdrawal wouldn’t provide any insurance against instability.”

“In a series of meetings leading up to his decision, military and intelligence officials told Mr. Biden that security was deteriorating in Afghanistan, and they expressed concerns both about the capabilities of the Afghan military and the Taliban’s likely ability to take over major Afghan cities,” the report continued.

“Other advisers, including Secretary of State Antony Blinken and national security adviser Jake Sullivan, raised the possibility of Taliban attacks on U.S. forces and diplomats as well as the Afghans who for two decades worked alongside them,” the report added. “Ultimately, neither disagreed with the president, knowing where he stood.”

In the aftermath of Biden’s decision, the Taliban have gone on a terrifying spree of reprisals, wreaking carnage against innocent women, abducting children to become sex slaves for their fighters, and exacting vengeance against those who may have cooperated in the occupation, including hangings and beheadings.

The Washington Post provided further insight into how the Biden order to withdraw military troops unfolded, culminating in the terrible events this weekend.

Secretary of State Antony Blinken testified to the House Foreign Affairs Committee in June that he did not expect an “immediate deterioration in the situation” if U.S. troops withdrew, the publication notes.

“Whatever happens in Afghanistan, if there is a significant deterioration in security — that could well happen, we have discussed this before — I don’t think it’s going to be something that happens from a Friday to a Monday,” Blinken said.

However, that is almost precisely what happened. President Biden then conceded that his withdrawal did not go the way that he had foreseen.

“The truth is, this did unfold more quickly than we had anticipated,” Biden continued. “So what’s happened? Afghanistan political leaders gave up and fled the country. The Afghan military collapsed, sometimes without trying to fight.”

On Tuesday night, former President Donald Trump, who had begun the military drawdown in Afghanistan, explained how he would have done things differently if he were still Commander-in-Chief.

“Think of this, we have a military that’s holding [Afghanistan],” Trump said. “I had it reduced down to 2,500 soldiers and they were doing a good job. It was fine. It was a smaller force. I took it down from close to twenty (thousand) to 2,500. And we were fine.”

“By the way, I’m America First,” Trump said. “Okay? The Americans come out first. But we’re also going to help people that helped us. And we have to be very careful with the vetting, because you’ve got some rough people in there. But, we’re going to help those people.”

“But, can you imagine?” Trump said. “Now, what we were going to do, very quickly, is we were going to take the military out last. Okay? Last. The people were coming out, they were going to come out, but the agreement was violated, so I held things back, because we weren’t going to do anything. Again, conditions based.”

“So, they weren’t fulfilling their obligations and conditions,” Trump added.

“Just to finish,” he went on. “The people come out first, then I was going to take all of the military equipment. Billions and billions of dollars worth of Black Hawk helicopters, brand new, that Russia now will be examining anjd so will China and so will everybody else, because it’s the greatest in the world.”

“We have brand new Army tanks, and all sorts of equipment, missiles, we have everything,” he continued. “I was going to take it out. Because I knew they weren’t going to fight.”

Then, former President Trump punctuated his points by putting the disaster of Biden’s decision in full context.

“It’s a great thing that we’re getting out,” he concluded. “But nobody has ever handled a withdrawal worse than Joe Biden. This is the greatest embarrassment, I believe, in the history of our country.”