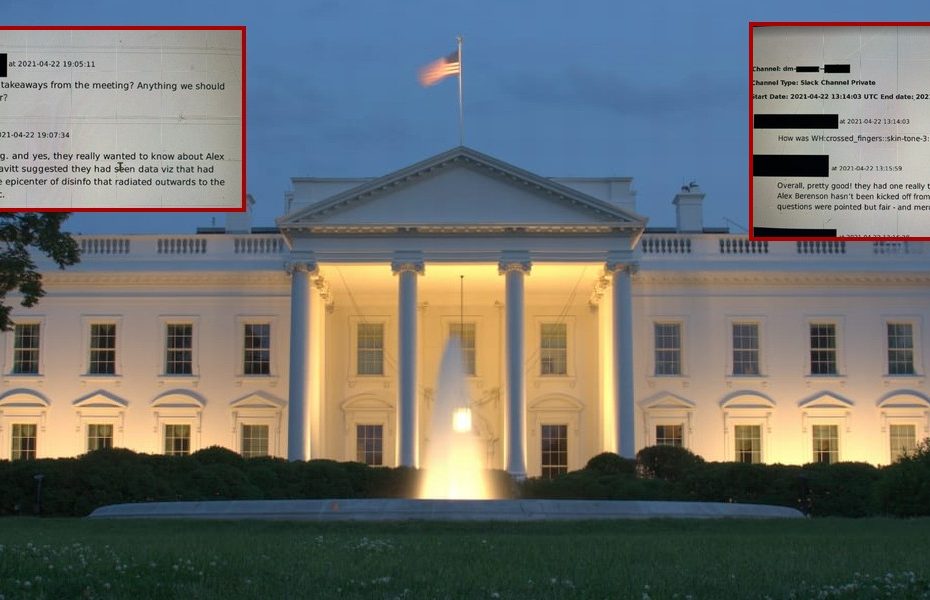 Alex Berenson earned a reputation as a thorn in the side to the relentless Covid vaccine pushers who transformed the federal government into Big Pharma salesmen during the Covid pandemic.

The former New York Times reporter constantly dug up embarrasing data and factoids that showed the Covid vaccine pushers were not shooting straight with the American people about their purportedly ‘100% safe and effective’ products.

Berenson was precipitously banned from Twitter in August 2021 for committing the thought crime of questioning the demonstrably false and misleading claims made about the Covid mRNA ‘vaccines.’

In July 2022, he announced his return with the Eminem reference, “Shady’s back. Tell a friend.” He then punked Twitter with an instant replay of the tweet that had gotten him booted from the social media platform/regime-messaging-apparatus to begin with.

“Don’t think of it as a vaccine. Think of it – at best – as a therapeutic with a limited window of efficacy and terrible side effect profile that must be dosed IN ADVANCE OF ILLNESS,” he wrote. “And we want to mandate it? Insanity.”

On his Substack blog, “Unreported Truths,” Berenson related that he couldn’t comment beyond the official statement that “the parties have come to a mutually acceptable resolution. I have been reinstated. Twitter has acknowledged that my tweets should have not led to my suspension at that time.”

But on Friday, Berenson revealed some stunning truths in the court documents regarding who exactly was behind his ‘permanent suspension’ from Twitter.

“Biden Administration officials asked Twitter to ban me because of my tweets questioning the Covid vaccines, even as company employees believed I had followed Twitter’s rules, internal Twitter communications reveal,” Berenson revealed.

“In a White House meeting in April 2021, four months before Twitter suspended my account, the company faced ‘one really tough question about why Alex Berenson hasn’t been kicked off from the platform,’ a Twitter employee wrote,” he added.

“The First Amendment does not apply to private companies like Twitter,” he went on. “But if the companies are acting on behalf of the federal government they can become ‘state actors’ that must allow free speech and debate, just as the government does.”

“Previous efforts to file state action lawsuits against the government and social media companies for working together to ban users have failed,” he noted. “Courts have universally held that people who have been banned have not shown the specific demands from government officials that are necessary to support state action claims.”

Berenson’s lawsuit was thus a true First Amendment case in that it was fighting back against a restriction of his free speech rights. The Biden administration’s pressing for a ban was also more than a mere passing suggestion. The regime wanted Berenson ‘digitally disappeared.’

“In my case, though, federal officials appear to have gone far beyond generically encouraging Twitter to support Covid vaccines or discourage ‘misinformation’ (i.e. information that the government does not like),” Berenson adds. “Instead, top officials targeted me personally.”

“Andrew Slavitt, senior advisor to President Biden’s Covid response team, complained specifically about me, according to a Twitter employee in another Slack conversation discussing the White House meeting,” he continued.

“They really wanted to know about Alex Berenson,” the employee wrote. “Andy Slavitt suggested they had seen data viz [visualization] that had showed he was the epicenter of disinfo that radiated outwards to the persuadable public.” 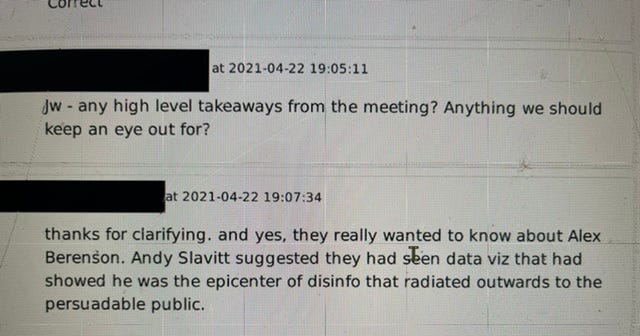 “According to an interview he gave to the Washington Post in June 2021, Slavitt worked directly with the most powerful officials in the federal government, including Ron Klain, President Biden’s chief of staff, and Biden himself,” Berenson notes. 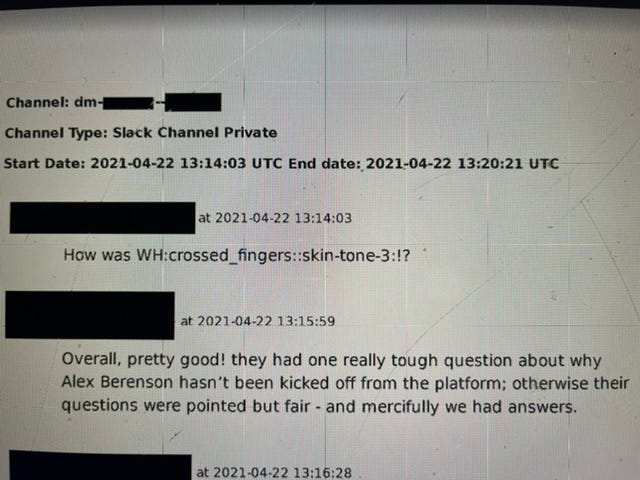 “The Slack conversations also show the pressure Twitter employees felt internally to respond to the government’s questions about whether the company was doing enough to suppress ‘misinformation’ about Covid and the vaccines,” Berenson says. “An employee writes that the questions at the meeting were ‘pointed’ but ‘mercifully, we had answers’.”

“At the time, employees said internally they did not believe I had broken the company’s rules,” Berenson says.

“I’ve taken a pretty close look at his account and I don’t think any of it’s violative,” an employee wrote on the Slack conversation a few minutes after the “really tough question about why Alex Berenson hasn’t been kicked off.”

Berenson then remarks on a Biden statement that preceded his first suspension by a sheer matter of hours.

As someone who has been targeted by state-affiliated groups like Newsguard and have been approached by certain big legacy media groups to explain my relatively explosive follower growth during the 2020 election, I can partially relate to Berenson’s story. I am sure if Twitter were forced to turn over its documents regarding my own social media account, there would be a demonstrable track record of suppression, suspension, and shadow-banning for explicitly political reasons.

And I am not alone. I am just one among hundreds of other social media users who have been targeted by the Biden regime’s allies.

This is Stalinist. This is not America. And it needs to stop.