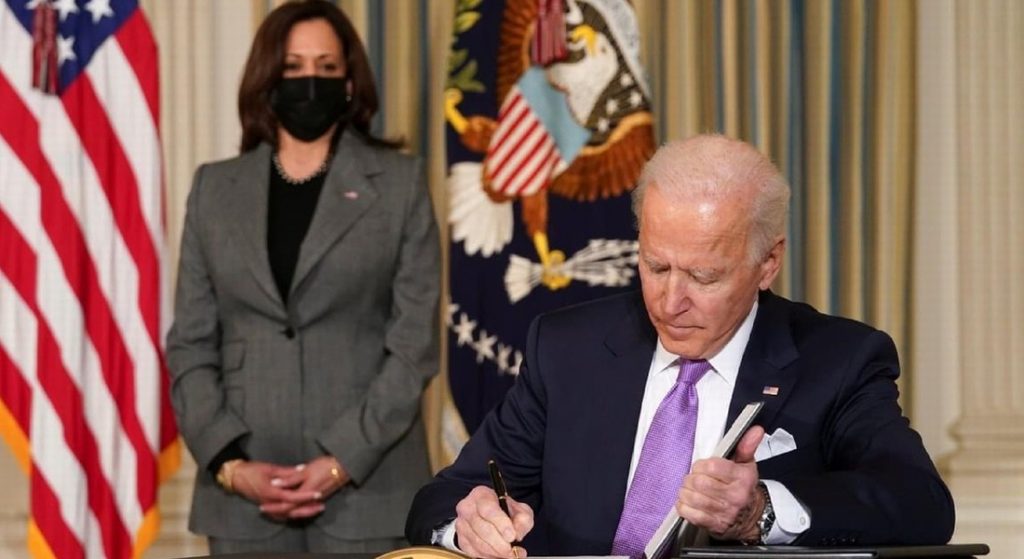 The Biden administration is set to release one of the most massive socialist spending packages in United States history, the New York Times and the Washington Post broke on Monday.

The president’s “advisers” have cobbled together a massive spending package, which is being put together in the aftermath of a huge COVID $1.9 trillion “relief” package, which critics have argued was a boondoggle stuffed with handouts for special interests.

“That effort is expected to be broken into two parts — one focused on infrastructure, and the other focused on other domestic priorities, such as universal prekindergarten, national child care, and free community college tuition,” the Washington Post reported.

“The infrastructure component of the proposal includes $400 billion in spending to combat climate change, including $60 billion for infrastructure related to green transit and $46 billion for climate-related research and development,” the Post continued. “The plan also would aim to make electric vehicle charging stations available across the country. The measure would also include $200 billion for housing infrastructure, including $100 billion to expand the supply of housing for low-income Americans

“Administration officials caution that details of the spending programs remain in flux,” the Times reported. “But the scope of the proposal under consideration highlights the aggressive approach the Biden administration wants to take as it tries to harness the power of the federal government to narrow economic inequality, reduce the carbon emissions that drive climate change and improve American manufacturing and high-technology industries in an escalating battle with China and other foreign competitors.”

The cost of in-state tuition and out-of-state tuition for community college runs in the thousands per student, as reported by the USA Today:

According to Columbia, “in fall 2018, 5.6 million students were enrolled in public, two-year colleges. About 2 million were full-time students, and 3.6 million were part-time.”

Thus, the program would run into the tens of billions each year without even considering how the program would fuel demand for education, as well as lead to government competing against private and public four-year universities. The market distortion would be massive.

While the new spending package comes in at an estimated $3 trillion, the real pricetag for the Biden administration spending spree could swell to be much higher than that.

On Thursday it was reported that the Biden administration was eyeing a $4 trillion spending blowout that comes with a hefty tax increase — enough to cover the “blue states bailout” in the relief package.

“With each tax break and credit having its own lobbying constituency to back it, tinkering with rates is fraught with political risk,” Bloomberg reported. “That helps explain why the tax hikes in Bill Clinton’s signature 1993 overhaul stand out from the modest modifications done since.”

“For the Biden administration, the planned changes are an opportunity not just to fund key initiatives like infrastructure, climate and expanded help for poorer Americans, but also to address what Democrats argue are inequities in the tax system itself,” the report continued.

Whether the new Biden spending packages come in at $3 trillion or $4 trillion, it would be in addition to the  recently passed $1.9 trillion relief plan, as well as nearly $4 trillion in stimulus measures passed under former President Donald Trump. That would be nearly $11 trillion in new spending in just one year.

The Democrats’ war on poverty never stops, because their socialist programs keep millions of people locked in poverty. Far from being “free,” these programs come at the expense of our opportunity and our freedom.