The Department of Justice has asked the judge who signed off on the search warrant for the FBI’s unprecedented raid of a former president’s home to keep the affidavit that was a pretext for the raid sealed.

The Department of Justice’s rationale for maintaining the search warrant affidavit’s secrecy is a familiar one to those who watched the the department’s behavior during the Russiagate scandal, the Mueller investigation, and the Ukraine impeachment hoax. The DOJ claims that providing the public with transparency about why the FBI raided a former president and political rival of the current president before the midterm elections might compromise state secrets and agency methods.

“On August 8, 2022, the Department of Justice executed a search warrant at the premises located at 1100 S. Ocean Blvd., Palm Beach, Florida 33480, a property of former President Donald J. Trump,” the DOJ states. “Given the circumstances presented in this matter and the public interest in transparency, and in the wake of the former President’s public confirmation of the search and his representatives’ public characterizations of the materials sought, the government moved to unseal the search warrant, its attachments, and the Property Receipt summarizing materials seized, which motion this Court granted.”

“Those docketed items, which had already been provided to the former President’s counsel upon execution of the warrant, have now appropriately been made public,” the DOJ continues. The affidavit supporting the search warrant presents a very different set of considerations. There remain compelling reasons, including to protect the integrity of an ongoing law enforcement investigation that implicates national security, that support keeping the affidavit sealed.”

The entire legal document can be read below:

The FBI’s search warrant can be viewed in full below.

There is an attachment that proves that the FBI’s search warrant was overly broad. Attachment B shows the investigative scope to be both classified and unclassified documents, evidence of transmission of “national defense information or classified material,” and evidence relating to the alternation/destruction of “Presidential Records, or of any documents with classification markings.” 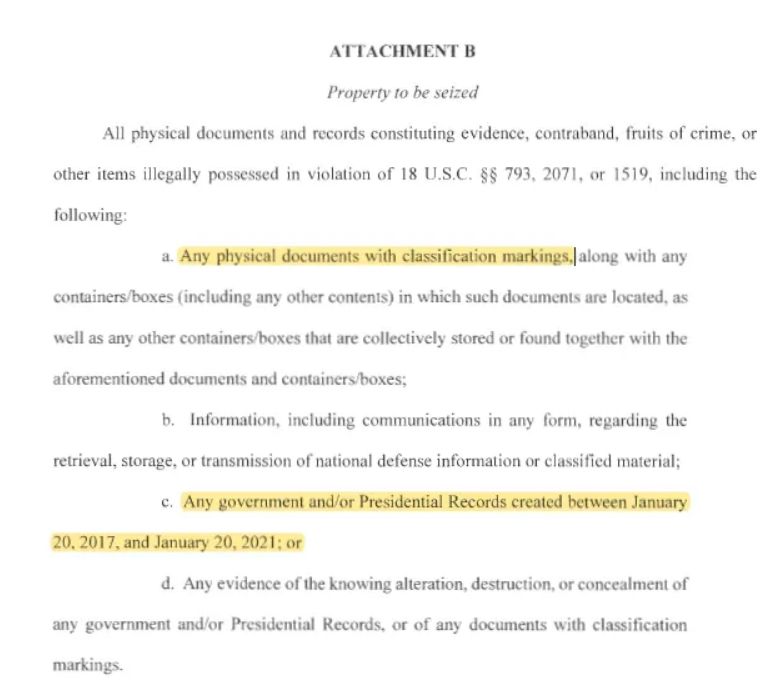 This confirms beyond a reasonable doubt that the FBI was undertaking a fishing expedition. As The Federalist’s Sean Davis noted:

Bruce Reinhart, the judge who signed off on the search warrant for the FBI’s unprecedented raid of former President Donald Trump, was a political donor to former President Barack Obama and was a lawyer for the disgraced pedophile Jeffrey Epstein.