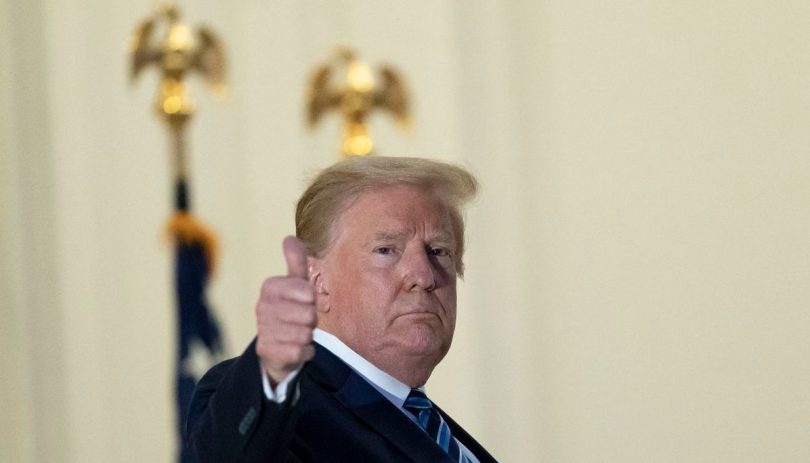 Former President Donald Trump has released a statement in solidarity with those being detained without speedy trial in connection with the January 6 riot.

Our hearts and minds are with the people being persecuted so unfairly relating to the January 6th protest concerning the Rigged Presidential Election,” Trump said in his statement.

“In addition to everything else, it has proven conclusively that we are a two-tiered system of justice. In the end, however, JUSTICE WILL PREVAIL!” he added.

“The statement was issued ahead of Saturday’s rally to protest the treatment of Capitol rioters,” Axios notes. “Over 600 known federal defendants face charges related to the Jan. 6 insurrection.”

“The ‘Justice for J6 rally’ is organized by a nonprofit group led by former Trump campaign staffer Matt Braynard,” Axios added. “Trump has not indicated whether he will attend or participate.”

However, this is false. Donald Trump has told supporters to stay away from the rally.

“Trump also characterized the planned Sept. 18 rally at the U.S. Capitol as a ‘setup’ meant to denigrate Republican voters regardless of what transpires,” the Federalist reported in an exclusive.

Meanwhile, Washington D.C. appears to be bracing for popular unrest amid increasingly authoritarian policies, such as a federal vaccine mandate that was issued via executive order. On Thursday, the news surfaced that Washington D.C. was installing fencing, motion detection, and facial recognition software around the U.S. capitol.

Motion-tracking watchtower installed outside the US Capitol along with new fencing pic.twitter.com/rPBp3SfN3z

The security measures were purportedly put in place in preparation for a September 18 ‘far-right rally’ that is being disavowed by the Proud Boys and even by former President Trump himself.

However, Donald Trump is showing support for those who have been held for months awaiting trial, even as the Department of Justice betrays its constitutional duty to ensure speedy trials for those charged.

The DOJ has not charged any of the 557 defendants with treason, insurrection, or an attempt to overthrow the government, a legal fact that stands in stark relief with the exaggerated claims being made by the U.S. government.

It has, however, still managed to have overcharged scores of defendants for felonies that are now being pleaded down to petty misdemeanors.

“What is obvious now in hindsight is that the Biden Justice Department prosecutors sought and obtained felony charges in many cases based on almost no meaningful review of actual evidence about what happened; it used fear and hysteria to justify doing so,” Shipwreckedcrew of Human Events observes. “Now they are being pressed to provide the evidence that is supposed to support the felony charges they brought, and are unable to do so in the timeframe required by law. So they are abandoning the cases on the best possible outcome available—the least serious of all federal crimes, ‘petty’ misdemeanors.”

“Now that the DOJ has gone down the path of exchanging guilty pleas to misdemeanors for some defendants charged with felonies, it will become more difficult to not do the same for a much larger number of defendants where the facts are substantially the same,” the Human Events piece added.

The Department of Justice appears to have politicized the charges against the Jan. 6 defendants for effect. This is not consistent with “justice,” this is the weaponization of the nation’s highest law enforcement agency to do the bidding of the dominant political party.

Former President Donald Trump has every right and reason to call out the Department of Justice for politicizing the charging of defendants for what amounts to a riot where no one except Trump supporters were killed.