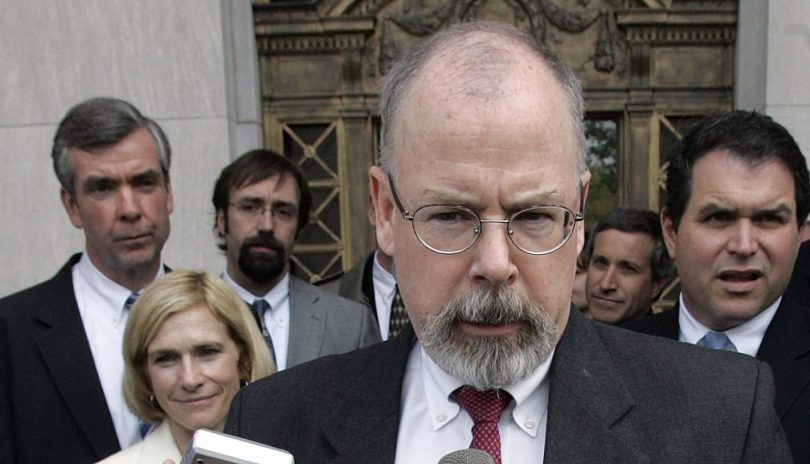 Special counsel John Durham is finally doing part of his job, even if it is much too late. Durham has told the Justice Department that he will seek an indictment against a Clinton-connected lawyer on the charge of making a false statement to the F.B.I., the New York Times has reported.

“Any indictment of the lawyer — Michael Sussmann, a former federal prosecutor and now a partner at the Perkins Coie law firm, and who represented the Democratic National Committee on issues related to Russia’s 2016 hacking of its servers — is likely to attract significant political attention,” the Times noted.

“Donald J. Trump and his supporters have long accused Democrats and Perkins Coie — whose political law group, a division separate from Mr. Sussmann’s, represented the party and the Hillary Clinton campaign — of seeking to stoke unfair suspicions about Mr. Trump’s purported ties to Russia,” the Times dishonestly reported.

Sussmann is a partner at the Perkins Coie law firm that represented the Clinton campaign and the Democratic National Committee. The law firm is responsible for hiring Fusion GPS, which led the effort to compile anti-Trump opposition research in the Steele dossier. The Steele dossier is a discredited piece of uncorroborated and salacious opposition research that was nonetheless used to file illegal FISA warrants to spy on the Trump campaign.

“The case against Mr. Sussmann centers on the question of who his client was when he conveyed certain suspicions about Mr. Trump and Russia to the F.B.I. in September 2016,” the Times continued. “Among other things, investigators have examined whether Mr. Sussmann was secretly working for the Clinton campaign — which he denies.”

While Sussman is likely to be indicted, his attorneys are professing his innocence.

“Mr. Sussmann has committed no crime,” they said. “Any prosecution here would be baseless, unprecedented and an unwarranted deviation from the apolitical and principled way in which the Department of Justice is supposed to do its work. We are confident that if Mr. Sussmann is charged, he will prevail at trial and vindicate his good name.”

“The accusation against Mr. Sussmann focuses on a meeting he had on Sept. 19, 2016, with James A. Baker, who was the F.B.I.’s top lawyer at the time, according to the people familiar with the matter,” the Times reported, adding that Durham is working under a five-year statute of limitations for such crimes that will expire this week.

“At the meeting, Mr. Sussmann relayed data and analysis from cybersecurity researchers who thought that odd internet data might be evidence of a covert communications channel between computer servers associated with the Trump Organization and with Alfa Bank, a Kremlin-linked Russian financial institution,” the paper added.

“The F.B.I. eventually decided those concerns had no merit. The special counsel who later took over the Russia investigation, Robert S. Mueller III, ignored the matter in his final report.”

While that matter will no longer be ignored, there is the obvious issue that this will all be handled by a Department of Justice that has not shown any interest in actual “justice.” If there is more than a wrist slap shown to Sussman for willfully misleading of the American people, it will be a shock to observers of the corrupt machination known as the Swamp.

The First State Has Filed a Lawsuit Against the Biden Administration Over Federal Vaccine Mandates: Arizona