The Federal Bureau of Investigation seized Trump records that fell under executive privilege and attorney-client privilege, according to an exclusive Fox News report that broke on late Saturday.

“The FBI seized boxes containing records covered by attorney-client privilege and potentially executive privilege during its raid of former President Trump’s Mar-a-Lago home, sources familiar with the investigation told Fox News, adding that the Justice Department opposed Trump lawyers’ request for the appointment of an independent, special master to review the records,” the report stated.

“Sources familiar with the investigation told Fox News Saturday that the former president’s team was informed that boxes labeled A-14, A-26, A-43, A-13, A-33, and a set of documents—all seen on the final page of the FBI’s property receipt —contained information covered by attorney-client privilege,” the report added.

On Monday, the FBI executed an overly broad search warrant to find both classified and unclassified information at Donald Trump’s estate at Mar-A-Lago. The Feds carried off 15 boxes of items, as listed in a manifest, allegedly including 11 sets of ‘classified’ materials.

In the search warrant, there is a section that shows the FBI weren’t just seeking for classified materials in its raid. The Feds were looking for any and all presidential records. 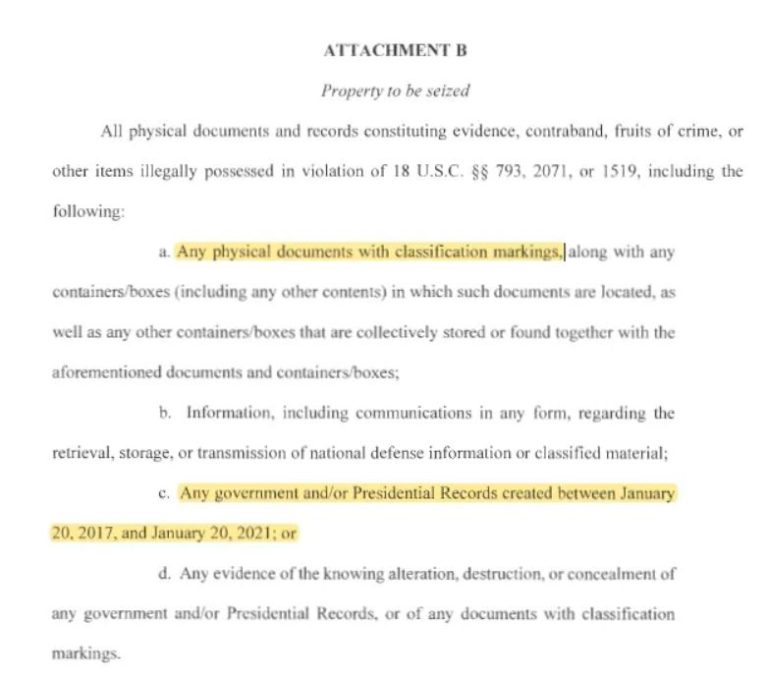 “The FBI seized classified records from Trump’s Palm Beach home during its unprecedented Monday morning raid, including some marked as top secret,” Fox News’s report continued. “But the former president is disputing the classification, saying the records have been declassified.”

As the report notes, the search warrant application and property manifesto were formally unsealed Friday afternoon. Donald Trump reacted to the latest developments on the unprecedented raid on a former president on Saturday.

“The ‘White House’ just announced that it had NO KNOWLEDGE of the early morning RAID on Mar-A-Lago, or the break in of Melania’s closets, my safe’s, or the secured and locked storage area where unclassified documents were safely held, and which the FBI knew of, was shown, and made recommendations that another lock be added (which they cracked, but not with the safecracker that they brought with them!),” Trump wrote. “Does ANYBODY really believe that the White House didn’t know about this? WITCH HUNT!”

Earlier Trump insisted that the documents were all declassified, regardless of the White House or the Department of Justice’s claims to the contrary.

“Number one, it was all declassified. Number two, they didn’t need to ‘seize’ anything,” Trump said on Truth Social. “They could have had it anytime they wanted without playing politics and breaking into Mar-a-Lago. It was in secured storage, with an additional lock put on as per their request…”

Earlier on Saturday, Fox News reported that a Trump attorney certified that there were ‘no classified documents’ at Mar-A-Lago after June.

“Trump’s lawyers previously held a high-level meeting with people from the Justice Department and the FBI, which the former president briefly attended, but it’s unclear if the letter was signed during the meeting,” Fox News reported on Saturday.

Trump told Just the News on Friday that he had issued a ‘standing order’ that classified material that was brought back to Mar-A-Lago under his presidency was to be considered declassified. Therefore, the Trump attorney’s certification would have been factual.

“The very fact that these documents were present at Mar-a-Lago means they couldn’t have been classified,” the former president’s office stated. “As we can all relate to, everyone ends up having to bring home their work from time to time. American presidents are no different. President Trump, in order to prepare for work the next day, often took documents including classified documents from the Oval Office to the residence.”

“He had a standing order that documents removed from the Oval Office and taken into the residence were deemed to be declassified,” the statement added. “The power to classify and declassify documents rests solely with the President of the United States. The idea that some paper-pushing bureaucrat, with classification authority delegated BY THE PRESIDENT, needs to approve of declassification is absurd.”

John Solomon, the CEO and Editor in Chief of Just the News, appeared on “Hannity” on Friday night and provided his insight on the “standing order.”

“So first off, it’s important to understand that the way the classification is currently governed is by two executive orders,” Solomon explained. “One in 2003 by President Bush, one in 2009 called 13526 by President Obama. It says ‘everybody the government who wants it to classify a document must follow these the classification procedures except the president and the vice president. They made declassify anything, for any reason, at any moment, while they are the incumbent, if it assists the role of their job.”

As Cornell University’s Legal Information Institute points out, presidential documents that are under executive privilege are exempted from certain coverage:

If the Biden regime’s ‘fishing expedition’ swept up records that fall under executive privilege, it may very well be the case that the only serious crime that was committed at Mar-A-Lago was committed by the FBI itself.