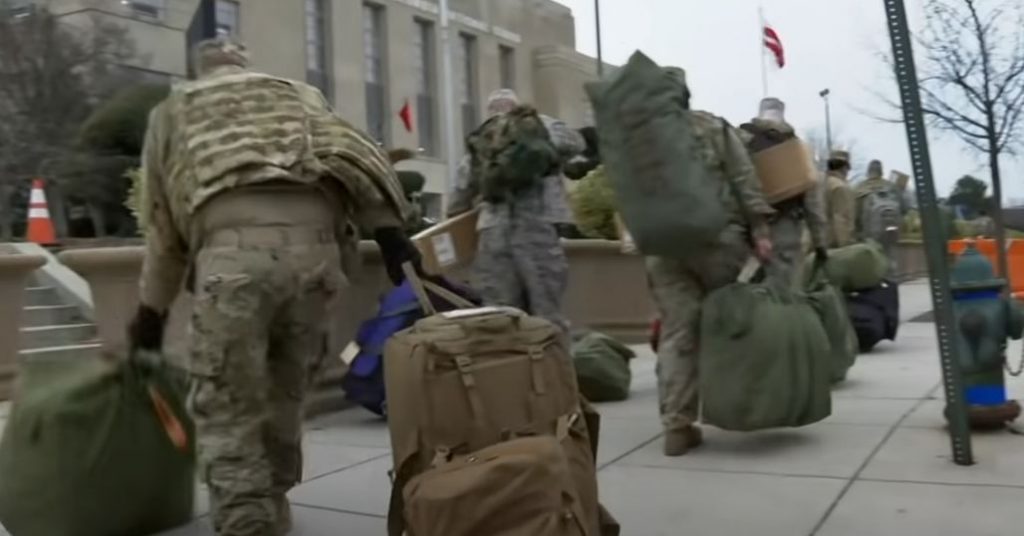 It appears the saga following the alleged threat on the nation’s Capitol following the “insurrection” on January 6th will soon be coming to an end.

The Capitol Police are ordering National Guard troops of the nation’s capitol, according to a report by Fox News.

The Capitol Police ordered the Guard troops out of the U.S. Capitol, according to the National Guard

“The National Guard is now focusing on coordinating with federal law enforcement to meet any continuing requirements while simultaneously working the logistics to return Guard members to their home states, families, and employers,” the release stated. “As the mission wraps up in the capital region, the National Guard Bureau is working to assist states with preparations and logistics to return troops safely home. “

“There were no security incidents reported involving the National Guard, officials said in a media release,” the Military Times added.

The news of military de-escalation follows upon no reports of credible threats to national security following the Capitol riot on January 6th. While there were no reported attacks from Trump supporters, major cities did see riots from Antifa and radicalized BLM activists.

The move also follows outrage about thousands of National Guard troops being forced to sleep in a parking garage, reportedly with only one toilet and one electrical outlet. A little actual journalism can go a long way.

I have instructed General Norris to order the return of the Texas National Guard to our state. @TexasGuard

I spoke to @TAGofGA last night and this did not happen to any @GeorgiaGuard troops. Many are already on their way home. We owe a debt of gratitude to the brave men and women in the National Guard who answered the call here in Georgia and in DC this week! https://t.co/lVaOlSYHfb

National Guard back inside Capitol after having been moved to parking garage https://t.co/bSfyJajXYX pic.twitter.com/p6FViKd3Oy