The New York Times is prepping the terrain for another FBI raid of Donald Trump’s home in Mar-a-Lago for missing documents that the Department of Justice is apparently seeking.

“A top Justice Department official told former President Donald J. Trump’s lawyers in recent weeks that the department believed he had not returned all the documents he took when he left the White House, according to two people briefed on the matter,” the Times reported on Thursday night.

“The outreach from the official, Jay I. Bratt, who leads the department’s counterintelligence operations, is the most concrete indication yet that investigators remain skeptical that Mr. Trump has been fully cooperative in their efforts to recover documents the former president was supposed to have turned over to the National Archives at the end of his term,” the report added.

“It is not clear what steps the Justice Department might take to retrieve any material it thinks Mr. Trump still holds,” the report noted. “And it is not known whether the Justice Department has gathered new evidence that Mr. Trump has held onto government material even after the court-authorized search in August of his private club and residence in Florida, Mar-a-Lago, and 18 months of previous efforts by the federal government to convince the former president to return what he had taken on leaving office.”

This is clearly laying the groundwork for a potential second FBI raid to find the purported ‘missing documents.’ And it is no coincidence that Jay Bratt played a key role in the failed Mueller witch hunt.

The critical thing to note about Bratt is that he was a “resource of the Mueller investigation and worked directly with Andrew Weissman.” Russiagate followers will recall Andrew Weissman, nicknamed as ‘Mueller’s pit bull.”

On Wednesday, a “sealed” list of Trump’s documents that were seized in the FBI’s raid at Mar-a-Lago was accidentally leaked from the docket and temporarily made publicly available.

It contains a list of documents reviewed and segregated by the filter review team. There are some interesting items here. 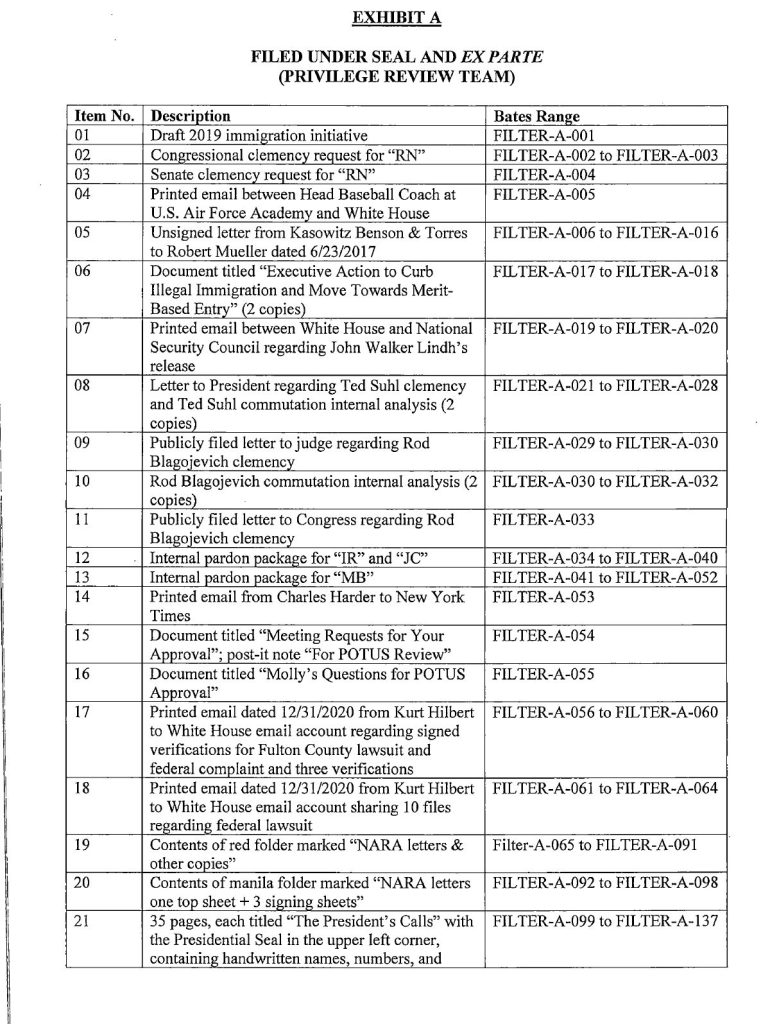 Then there is a final item: Miscellaneous handwritten notes, including a “Message from Rudy.”

“The thousands of documents seized from former President Donald Trump’s Florida home included a mix of government, business and personal affairs, including analysis about who should get a pardon, call notes marked with a presidential seal, retainer agreements for lawyers and accountants, and legal bills, according to newly disclosed logs created by federal investigators,” Bloomberg summarized.

No nuclear secrets were listed among the documents. This looks like a desperate move to cover the FBI’s backside for not delivering the goods that were promised ahead of the 2022 midterm elections.

You can now call this the “Nuclear Secrets Hoax.”