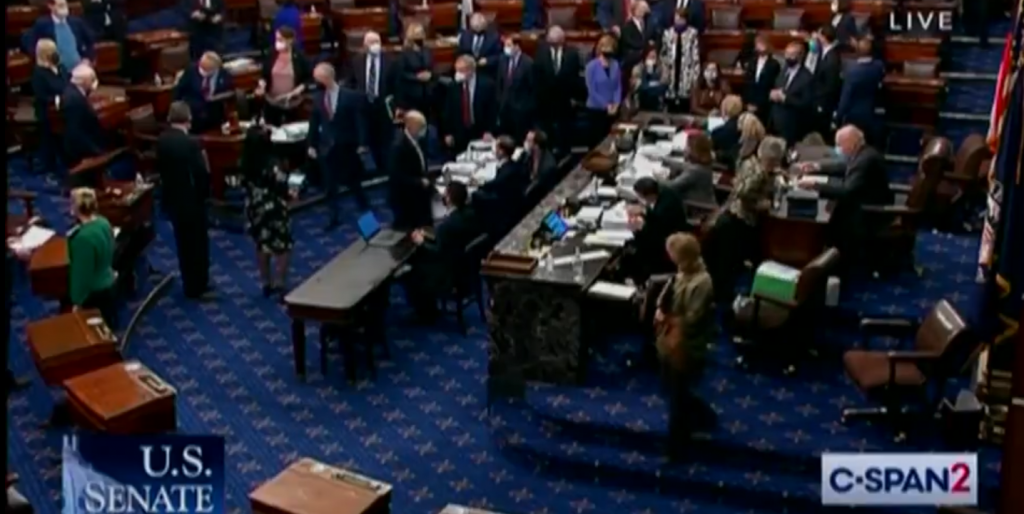 The U.S. Senate has passed the massive $1.9 trillion coronavirus relief bill. The final vote tally was 50-49.

And there it is.

After 25+ hours of debate, the Senate passes the American Rescue Plan on a party-line vote of 50-49. pic.twitter.com/ZBn7RMmXQn

“In a 50-49 vote, the Senate passed a massive Covid relief bill that includes weekly $300 unemployment checks, $1,400 stimulus checks and no change to the federal minimum wage,” CBS reported.

"The only way I know how to improve it is with a shredder. It's not even a coronavirus bill.

Sen. Ron Johnson had attempted to slow the bill down by making the Senate clerk read the entire 500-plus-page bill, which took over 10 hours.

The COVID relief bill just passed by the Senate will cost Americans over $3 billion per page.

Meanwhile, Democrats were enthused about the boondoggle.

The American Rescue Plan is the most significant piece of legislation to benefit working people in the modern history of this country. pic.twitter.com/bRcOAqJwKG

But Senator Tom Cotton of Arkansas had sobering commentary.

How will sending stimulus checks to murderers and rapists in prison help solve the pandemic?

“How will sending stimulus checks to murderers and rapists in prison help solve the pandemic?” he reacted.

Senator Ted Cruz had also warned that it would give out money to illegal aliens.

Democrats just voted against my amendment that would have prevented American taxpayer dollars from being handed out to illegal aliens in the form of $1,400 stimulus checks. https://t.co/zYNGrC9dqZ

“Democrats just voted against my amendment that would have prevented American taxpayer dollars from being handed out to illegal aliens in the form of $1,400 stimulus checks,” he said.

Read his statement on the amendment: pic.twitter.com/OV8uJvxkxA

“My amendment retains and keeps in place the CARES formula that was used in the bipartisan package that passed 96-0,” he continued. “It’s a much fairer and better allocation for the country as a whole. Many states benefitted from the CARES formula and it should remain in place.”

“I hope Democrats don’t send money to California and New York simply because they are Democrat states,” Graham added.

And many Americans “hope” that the Republicans would wake up and do something political effective for a change. Like stopping monstrous bills such as this particular COVID-19 “relief bill.”